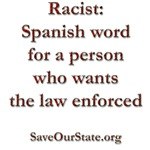 Here are samples of some more or less popular mainstream conservative pundits and their audiences, many of them loyal and long-time Bush supporters, who are just beginning to realize how completely our country has been betrayed. Their cognitive dissonance is palpable, though many have yet to accept the full extent to which their worldviews have been shaken.

Linda Chavez: If you’re against open borders, you might be a Nazi

Paul Gigot & WSJ Editorial Board: The Right Is “Not Even Rational” Anymore On Amnesty Bill, Motivated By Anger, Hate, And Bigotry

In that last link, after noting just how absurd the pro-amnesty open-border lies have become, Rich Lowery asks:

How stupid do these people think we are?

The answer is: very stupid. And I have to agree. What they know is that the good and righteous people of the law-and-order variety can be distracted indefinitely with the right mix of “you’re a raaaaaaacist” shaming and pseudo-intellectual theatrics.

Many of these pundits never cared much about immigration. They can’t see the effects, or have friends they don’t want to upset. They’re fond of saying they’re “pro-immigrant” and only oppose the illegal variety. They’re displeased at having to discuss the subject, and look forward to returning to the partisan snark they’re so much more comfortable with.

They have yet to fully absorb the implications of current events. POOF! It’s legal. Now what’s your argument racist? What part of usurpation don’t you understand?

Some legislators had also mentioned to us (oftentimes laughing) how they had “defanged” or “gutted” anti-immigration bills and measures, by neglecting to fund this program or tabling that provision, or deleting the other measure, etc. “Yes, we passed that law, but it can’t work because we also…” was a usual comment to assuage the Mexican delegations.

The Founding Fathers also prescribed a cure for usurpation. Hopefully the American people will not apply it so literally, for the sake of those legislators.