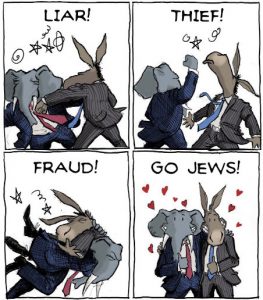 The good news? A consensus is forming that the jewed regime is illegitimate. The bad news? Hardly anyone will acknowledge that the regime is jewed.

The confusion is fed by jewsmedia pundits who know perfectly well what’s going on but pretend otherwise. Michael Tracey, for example:

The fact that so many Whites are instinctively dismayed by this situation makes perfect sense and vindicates what “anti-semites” have been saying all along. Democracy is a fraud, a mask for rule by jews. Confusion is a feature, not a bug. Relentless jewing eventually provokes a reaction. Then jews screech that the reaction – however squashed, divided, co-opted and otherwise transformed by alt-jewing – is the problem.

Most of the time most goyim don’t ever realize that what’s happening has anything to do with jewing. The jews know. Many very consciously disguise themselves and clamber onto soapboxes in every nook and cranny of the discourse to spin kooky narratives shifting attention and blame elsewhere. Others jew more openly, sniffing out and screeching about “anti-semitism”, shamelessly portraying their tribe as victims while barking orders at the goyim to bring them the heads of their enemies.

The race pitted two Jews at different poles of the sociopolitical culture wars against each other — a moderate Democrat in Frankel and a far-right agitator in Loomer, who plays on her Jewish identity in her adamantly anti-Muslim rhetoric.

“We’re putting the Jews on trial here in District 21,” Loomer told the Jewish Telegraphic Agency in September. “They have a choice between a Republican Jew who is going to advocate for their survival in their best interests, or they can stand with self-hating Jew Lois Frankel, who is doing the bidding for the jihadists in the Democrat Party who are just literally walking Jews to the gas chamber.”

This intersectional jewing, this fictitious conflict – jews screeching at jews about what’s best for jews – rages behind every partisan conflict across the entire regime. They mostly try to hide it.

The regime is anti-White because it is so thoroughly jewed. Politicians and pundits on all sides join to condemn “White supremacism” whenever they’re not screeching about “anti-semitism”. For the past several years they’ve been doing both at the same time.