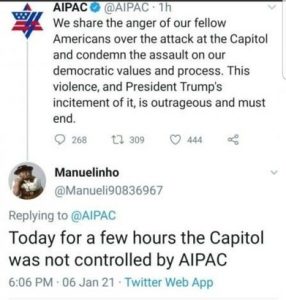 And now, a rise in political extremism, White supremacy, domestic terrorism that we must confront and we will defeat.

Like every other recent president, but more so, the out-going kikeservative-in-chief surrounded himself with jews and frequently praised them as a collective, as a tribe. He hardly ever uttered the word “White”. Never in a positive sense. In his first official speech the new kikeservative-in-chief reversed this unthinkably “racist” precedent, explicitly declaring war on Whites for being too White. At the same time the unspeakable “anti-semitism” of the previous jew-first administration is, as usual, being tikkun olammed, packed with even more jews.

The virulently anti-White jewsmedia is swooning and screeching at the same time, in unison, celebrating the most “woke” and “diverse” administration ever while demonizing even the dimest, lamest forms of opposition.

We share the anger of our fellow Americans over the attack at the Capitol and condemn the assault on our democratic values and process. This violence, and President Trump’s incitement of it, is outrageous and must end.

We cannot allow the historic & horrific events of the past 48 hours to fade without significant consequences. In our 100+ years of history, @ADL has never called for the President of the United States to be removed from office. Today, that changes.

After last week’s chaos in the U.S. Capitol, Ben & Jerry’s issued a statement, that called the violence a “riot to uphold white supremacy.”

“We must dismantle white supremacy and we have to understand that this is a white problem,” Ben & Jerry’s Ice Cream co-founder Ben Cohen told Yahoo Finance. “This is not a Black problem. This is a problem of us.”

Jews Have Until Thursday to Influence Ethnic Studies Curriculum:

A proposed, state-wide, mandatory Ethnic Studies Model Curriculum in California is open for public comment only until Thursday, January 21. The current draft of the curriculum celebrates figures who have promoted anti-Semitism (including leaders of the Third World Liberation Front and the anti-Jewish leaders they admire); it uses racial distinctions to divide people into those who are considered white (and therefore privileged) and those who are non-white (and therefore oppressed); and in the case of Jews, it combines the two, pitting “Jews of color” against Jews who are tarred with “conditional whiteness” and its attendant “racial privilege.”

“White supremacists continue to racialize Jews as non-white,” the curriculum’s “Fact Sheet on Jewish American Diversity” acknowledges. But “many Jews with light skin identify with the idea of white-presenting,” it reads. “Light-skinned Jews…experience white privilege,” while “Jews of color like all communities of color face systemic racism.” In other words, the same kind of Jews who, in living memory, were forced into ovens for being non-white, are now identified as white –– or at a minimum, as having “conditional whiteness.” This disqualifies most Jews from the solidarity offered other minority groups.

There ought to be no discussion about Jews and privilege that doesn’t begin by talking about the historically enacted and repeated genocidal ideology that revolves around Jews and privilege. For an ethnic studies curriculum to go traipsing through that discourse without a single mention of its ugly and bloody history is not a lesson about anti-Semitism. It is a repetition of it. By itself, that should effectuate a vote of no confidence in the entire franchise.

In the midst of the largest recorded surge in anti-Semitic propaganda and attacks against Jewish people across the globe, a new framework for racial theory again counts Jews as members of the evil class. Jews, who represent roughly 0.2% of the world’s population and roughly 2% of the U.S. population, are again targeted for their “privilege.”

Among the most shocking images from the Jan. 6 insurrection on Capitol Hill were pictures of a man wearing a sweatshirt that said “Camp Auschwitz” and “work brings freedom.” It’s an anti-Semitic reference to the Nazi concentration camp and extermination center where over 1 million Jewish people died or were murdered during the Holocaust.

The hoodie-wearer Robert Keith Packer was arrested in Virginia a week after the attack on Jan. 13. Two days later, at an emotional press conference, House Speaker Nancy Pelosi choked up when she singled him out as “one figure” that stood out to her the most after watching “so many disgusting images.”

“To see this punk with that shirt on and his anti-Semitism that he has bragged about…be part of a white supremacist raid on this Capitol, requires us to have an after-action review to assign responsibility who are part of organizing it and incentivizing it,” she said.

Who were the Jews pardoned by Trump in his final days in office? – The Jerusalem Post

BREAKING: For the first time in US history a U.S. Ambassador will be appointed to conduct diplomacy in a territory controlled by a US-designated terror group (Hamas).

UPDATE: Biden changed it back. Wonder if Israel called?

CONFIRMED: Israel threatened to expel the US Ambassador if President Biden didn’t change the name of the Israeli ambassador back. Two thoughts: a) Biden’s team made this change within an hour of taking control, b) Israel forced a retraction within two hours. Crazy.

Many top Biden appointees are engaged Jews – The Forward.

The issues galvanizing Jewish voters that Joe Biden has planned for Day One | The Times of Israel:

Biden also plans to start his presidency by undoing one of the first actions of Trump’s — which elicited sustained protest from many American Jewish groups. In January 2017, Trump signed an executive order that banned visitors and immigration from seven Muslim-majority countries: Iran, Iraq, Libya, Somalia, Sudan, Syria and Yemen. Jewish groups largely expressed outrage at the move, arguing that it was Islamophobic, and joined protests across the country at the time.

“It goes beyond our experience as immigrants,” Melanie Nezer, senior vice president for public affairs at Jewish immigration advocacy group HIAS, told the Jewish Telegraphic Agency in November. “There’s also our historical experiences, as refugees, in particular as people who were persecuted based on their faith and ethnicity, throughout many, many generations.”

It’s time to stop counting Jews in the Cabinet:

Nine Jews are in the new Senate (including the new Majority Leader) and 25 in the House of Representatives, making up more than 6 percent of the total Congress. That’s more than triple the percentage of Jews in the general population. There are also two Jews out of the nine justices on the U.S. Supreme Court. Seen in that light, a Jewish secretary of state, treasury secretary, homeland security secretary, attorney general and director of national intelligence—to name a few high-level positions—are merely a reflection of the preponderance of Jews who have risen to the top of just about every sector of American society.

Nor is it a great break from the previous administration, though that is something that many of those sharing those posts on Facebook about the Jews and Biden don’t like to talk about. The list of Jews in important positions in Trump’s administration was also impressive. But since the overwhelming majority of Jews despised Trump, there was a great deal more demonizing than kvelling going on about them on Jewish social media the last four years.

There was once a reason to care about counting Jews in presidential cabinets. In times when Jews were a marginalized minority shunned by society, the ability of a Jewish politician or adviser to rise to prominence was not only a source of communal pride, but an inspiration to young people to believe that they, too, could aspire to high office.

The secretary-general of the United Nations has urged coordinated global action to build an alliance against the growth and spread of neo-Nazism and white supremacy, and the resurgence of xenophobia, anti-Semitism and hate speech sparked partly by the COVID-19 pandemic.

Antonio Guterres made the appeal on Monday at the annual Park East Synagogue and the UN International Holocaust Remembrance Service marking Wednesday’s 76th anniversary of the liberation of the Auschwitz-Birkenau concentration camp, held virtually this year because of COVID-19.

He also urged international action “to fight propaganda and disinformation”, and called for stepped-up education on Nazi actions during World War II, stressing that nearly two-thirds of young people in the United States do not know that six million Jews were killed during the Holocaust.

Susan Rice: “Every agency will place equity at the core of their public engagement … to ensure government resources are reaching Americans of color & all marginalized communities — rural, urban, disabled, LGBTQ-plus, religious minorities, and so many others.