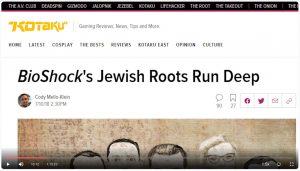 BioShock Part One: The Ethnic Struggle

I’m shocked, bioshocked, to discover that a cabal of jews made a video game not so subtly psychopathologizing Whites, portraying jews as victims of Whites, and shifting blame for jewing onto Whites.

Excellent decoding and analysis by American Krogan. Starts gently but pulls no punches. A disturbing glimpse into the minds of jews. Naive goyim will find it eye-opening. Perfectly sensible at 1.5 speed if you’re already familiar with jewing.