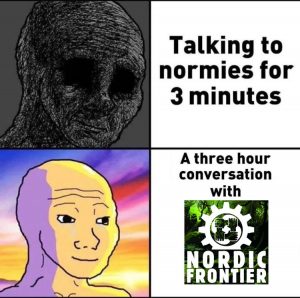 Andreas is the host of Nordic Frontier, the Nordic Resistance Movement’s longest running English-language podcast, and I’ve been a regular listener (and fan) since the beginning.

I’ll be appearing as a guest on Tuesday the 15th. Join us live on Odysee at 20:00 Swedish time.

Tune in here: NORDIC FRONTIER #220: TANSTAAFL and the concept of Jewing

TANSTAAFL from Age-of-Treason.com joins us this week to talk about the concept of Jewing and we will find out if there are any reasonable levels of antisemitism.

The program page is here.

I started using the term jewing regularly in 2016, and used the term more frequently as the jewing became increasingly overt during the Trump era. In my opinion the jewsmedia deliberately shifted its screeching more toward BLM and “wokeness” in mid 2020 exactly because they could sense that the jewing was becoming a bit too overt.

To put it simply jewing is what jews do, especially with regards to their hapless hosts, the goyim. I’ve said quite a lot on the topic, but I think you can get the gist of it in any of these links: Jew Identity: Non-White, Anti-White (Dec 2016), Discussing Jewing and Alt-Jewing with John Friend (Jan 2017), Intersectional Jewing (June 2017), Ron Unz on Jewing (July 2018), The Open Celebration of Jews and their Jewing (March 2019), The Tautology of Jewing (April 2019), “Wokeness” is a Jew Construct (July 2020).

If you enjoy this discussion you may also like Talking with Luke Ford and Pathology and Pathogen.

70 thoughts on “Talking with Andreas Johansson”