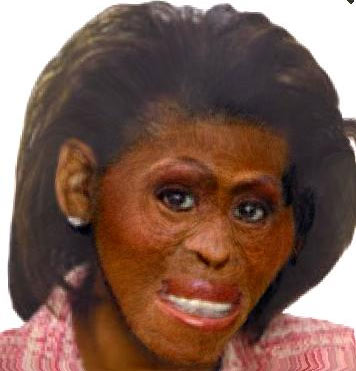 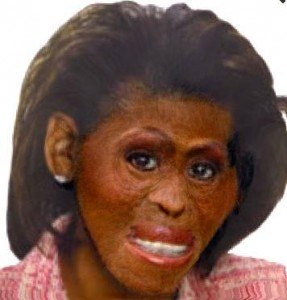 For most of the past week, when someone typed “Michelle Obama” in the popular search engine Google, one of the first images that came up was a picture of the American first lady altered to resemble a monkey.

On Wednesday morning, the racially offensive image appeared to have been removed from any Google Image searches for “Michelle Obama.”

Google officials could not immediately be reached for comment.

Google faced a firestorm of criticism over the episode. First, it banned the Web site that posted the photo, saying it could spread a malware virus. Then, when the image appeared on another Web site, Google let the photo stand. When a Google image search brought up the photo, an apologetic Google ad occasionally appeared above it.

The Michelle Obama ape photo can be found at FlyStyleLife » WTF IS THIS? MICHELLE OBAMA AS AN APE HUH?

Google: An explanation of our search results:

Sometimes Google search results from the Internet can include disturbing content, even from innocuous queries. We assure you that the views expressed by such sites are not in any way endorsed by Google.

Search engines are a reflection of the content and information that is available on the Internet. A site’s ranking in Google’s search results relies heavily on computer algorithms using thousands of factors to calculate a page’s relevance to a given query.

The beliefs and preferences of those who work at Google, as well as the opinions of the general public, do not determine or impact our search results. Individual citizens and public interest groups do periodically urge us to remove particular links or otherwise adjust search results. Although Google reserves the right to address such requests individually, Google views the integrity of our search results as an extremely important priority. Accordingly, we do not remove a page from our search results simply because its content is unpopular or because we receive complaints concerning it. We will, however, remove pages from our results if we believe the page (or its site) violates our Webmaster Guidelines, if we believe we are required to do so by law, or at the request of the webmaster who is responsible for the page.

We apologize if you’ve had an upsetting experience using Google. We hope you understand our position regarding offensive results. 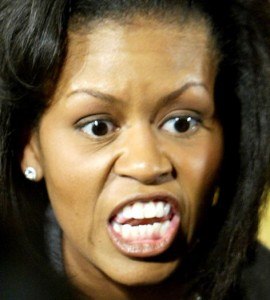 Insincerely, actually. In truth, hit rank for almost every search engine, and certainly for google, is based almost entirely on the popularity of the hit, which in most cases reflects its popularity with the general public. Google is lying to the public even while apologizing to the hypersensitive people offended by popular opinion.

Why does google protect Michelle Obama from ridicule? Who else does it protect? Hypersensitive people offended by impious use of the word jew, of course.