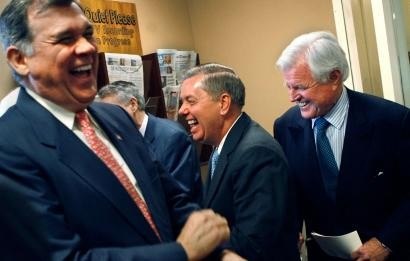 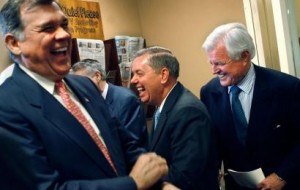 Zitizen
n. A person with all the rights of a citizen, but none of the responsibilities. *

The United States of America died last Thursday when the Senate announced that they had finally settled on a bipartisan “comprehensive immigration reform” deal. The death was confirmed yesterday when Senators tried to smother debate and rush the bill into law before anyone (other than the few who negotiated it in secret) has any real chance of understanding the details.

The unraveling began decades ago and by inertia alone the shattered remains of our constitutional republic bureaucracy will surely shuffle on for years yet. But at this moment in history the veil has been lifted. It is now crystal clear that our nation faces an irreconcilable divide.

On one side we have US citizens and legal immigrants who play by the rules, respect the law, and believe it should apply to everyone equally.

Of these people we expect ever more scrupulous obediance to the most nitpickety micromanaging of their lives by a nanny state on steroids. They are guilty until proven innocent if they don’t pay their taxes and scurry in fear that their car might be emitting too much pollution or that they haven’t filled out the proper bureaucratic paperwork for the doghouse in their backyard. And if these hapless plebs should utter any concern whatsoever that their wealth, health, or future is at risk they must realize that it will only reveal them as nothing more than the greedy racist xenophobic fascist bigots everybody always suspected they were.

On the other side are invaders aided by a sizable fifth column who have conferred upon themselves absolute moral authority.

From this perch they produce a never-ending stream of threats of social disruption, vapid excuses for their brazen lawlessness, and ever more ridiculous demands for special treatment for “their people”. You know, the people the bigots are all out to get. They are too poor and uneducated for the rigors of law to be so brutally forced upon them, after all they were here first and built everything. Their vaunted work ethic and family values exempt them from the silly rules, documents, and fines only lesser people like citizens must concern themselves with.

We have known for decades that portions of our government were compromised by such mental illness. We knew the compromise was deep when we saw our borders go undefended for years and “sanctuaries” began springing up everywhere.

Now fifth columnists with college educations and suits openly proclaim loyalty to their ethnic group over the law. Now invaders walk our streets proudly displaying their allegience to foreign states and go unmolested by the police. Now citizens and low-level authorities who speak out or act in defense of their country are vilified, sued, and harassed.

Leaders at the highest levels of our government have spelled out their betrayal. So eager are they to rush their invasion-friendly shamnesty into effect that they’ve dropped all pretense of fairness or reason and shoved aside any loyalty to the citizens whose interests they’ve sworn to protect and defend. They’ve revealed themselves instead to be shamelessly aligned with the invaders!

Under such conditions no nation can continue.

Killing this bill will not help, no matter how quick or resounding its defeat. The message has already been sent. Through sheer repetition the media will establish this as a “compromise” from the “center”. Opposition will be rebuffed as reactionary and extremist.

There is no need and there was probably no intent for the “comprehensive compromise” to ever become law. The ACLU, funded by our own tax dollars, has and will continue to sabotage any enforcement of any law. And the ladeeenyos know the status quo is in their favor. Every year their numbers balloon and the dim chance the rest of us will recognize and repell the invasion grows ever dimmer.

There is at this point only one hope.

Our government must declare a deadline before which illegal aliens will be permitted to leave peaceably. Aid of any but the most basic life-preserving sort will be cut off. Businesses caught employing them will have their licenses terminated. To enforce this will require martial law, a nationwide mobilization of the National Guard, and the deputization of many citizens. We will need to go block by block, house by house, business by business.

The illegal aliens who will not leave and cannot be deported, because we don’t know where they came from or their country won’t take them back, will then have to be confined. Somewhere along the Mexican border would be fitting. Mexico has always been delighted to dump their raw sewage and unwanted people on the US, it’s only fitting we should repay their favor by storing our hazardous human waste close to them.

This is of course nothing but a law-abiding citizen’s fantasy – even if the invaders didn’t have a supporter in the White House. The infiltration is too deep, the disease too advanced.

What’s clear now is that our entire country will instead continue a now inexorably slide toward the kind of lawless violent impoverished shithole Latin America and Los Angeles already are. The United States will decompose and die, while our moral and intellectual superiors will continue to tell us to stop whining and get busy celebrating our diversity.

The lies and excuses and betrayal will continue. The mainstream media aids and abet the invaders by ignoring scandals and pumping out sympathetic spin. They lecture us constantly about our country’s many ills but they never mention, much less investigate, the large “contribution” made by the invaders. They’d much rather lionize them.

Consult instead Mickey Kaus, Lawrence Auster, Lonewacko, Steve Sailer, Michelle Malkin, and VDARE for frank reports and analysis concerning the many flaws and contradictions of the bloody multicultural balkanization the hijackers have sent our once great country speeding toward.

Update: Mark Steyn on the benefits zitizenship. Hmmm. Will zitizens share the pleasures of jury duty? What do we do if they refuse? Take away their Z and give them a ZZ?

Sorry, I can’t help myself: George Borjas calls it a sham, Thomas Sowell calls it a fraud. I believe it rises to the level men once had the sense to recognize as treason.

Just for giggles: I went over to truthout to see what the leftists have to say. They’re all worked up about Alberto. Not much on immigration. They linked a NYTimes op-ed that concluded like this:

It is painful, for many reasons, to oppose this immigration deal. It is no comfort to watch as this generation’s Know-Nothings bray against “amnesty” from their anchor chairs and campaign lecterns, knowing that it gives hope to the people they hate.

It is especially difficult because lives are in the balance. The millions without documents live in constant fear: a campaign of federal raids has spread panic and shattered families. Congress’s dithering has encouraged the rise of homegrown zealots: mayors, police departments, county executives and legislators who take reform into their own hands, with cruelly punitive measures. No amount of hostile legislation is going to drive the immigrants away. A collapsed immigration deal could put off reform for years, and encourage more of this cruelty.

It is the nation’s duty to welcome immigrants, to treat them decently and give them the opportunity to assimilate. But if it does so according to the outlines of the deal being debated this week, the change will come at too high a price: The radical repudiation of generations of immigration policy, the weakening of families and the creation of a system of modern peonage within our borders.

I hate to bray, but look at who they identify as the enemy. “Know-Nothings” like me, whose kids are learning Spanish by immersion and whose property in Atzlan is now virtually certain to become worthless. And “homegrown zealots” who aim “cruelly punitive measures” to “shatter families”. Would it be fair to characterize this as treasonous hyperbole? I think so.

It is most certainly not this nation’s duty to welcome anyone. And we most certainly can drive the invaders away if we ever put any effort whatsoever toward that goal. If the Times editors consider it their duty to welcome with open arms anyone who wanders into their homes that’s fine with me. It isn’t fine that they try to hang the bill for their nation-busting largesse on all the rest of us. The leftists, as usual, have already wet their pants. And nobody with a national voice has even suggested martial law or mobilizing the Guard yet. That would be extreme. That would be worth wetting your pants about. I already have. But it’s either that now, or a much bloodier civil war and ethnic cleansing (with “Pilgrims” getting scrubbed) not too far down the road.

Such is the nature of the divide on immigration. The other side has no intention of even trying to encourage the invaders to leave, much less forcing them. People without documents living in fear? What a load of liberal guilt-trip horseshit. They should try being a law-abiding citizen surrounded an ever growing number of eyes smoldering with a mix of militant reconquista hatred and La Raza pride. They’re staring at us, Pilgrim.

Is it worth mentioning our jihadi-zitizen problem? Or will the ladeeenyos and their NYT shills be jealous if our immigration concerns extend to anyone other than them?