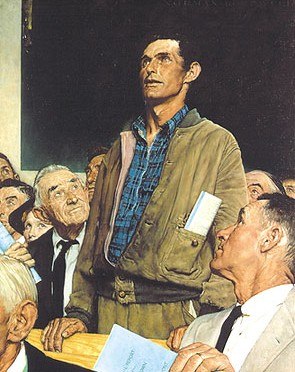 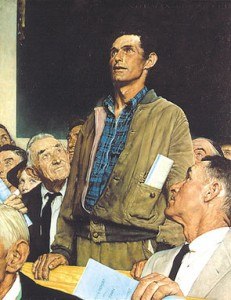 Under the title Whiteness and the Jewish Question Prozium writes:

Jews are a Semitic ethnic group like the Syrians or the Palestinians. “Ethnicity” is also a muddle of kinship and cultural factors. Jews have defined themselves as a distinct people for thousands of years. Until very recently, European Christians treated Jews as an alien element within their societies. Jews remain to this day painfully aware of their history and distinctiveness and do not identify with the American majority like other groups.

The debate over the “whiteness” of the Jews is unique to America. With few exceptions, Europeans have never cared much about “whiteness” because they have traditionally lived in racially homogeneous societies. Even in America, “whiteness” has never been synonymous with Caucasian. “White” was originally a synonym of “English” and was later refined into “Nordic” by the early twentieth century. The Italians were finally accepted as “white,” but are still thought of (accurately, in my view) as being less “white” than Scandinavians. The whiteness of Levantines like the Jews is even more suspect.

Most racialists find the “whiteness” debate interesting but consider it less important than other questions. Even if the Jews were “white” by some genetic proxy, it would not absolve them of the unique role they have played in undermining white racial consciousness in the United States. The fact remains that the organized Jewish community has treated white racialists as “the enemy” ever since the end of the Second World War.

They are the ones who started to antagonize us, not the other way around. Up until the 1960s, American racialism wasn’t associated with anti-Semitism. This changed in the wake of the Civil Rights Movement when it became clear that Jews had played a vanguard role in pushing the racial and cultural changes in America that we dislike. Their actions are what generate “anti-Semitism” and sympathy for the Third Reich.

It is completely rational to exclude a hostile, antagonistic minority from your living space. One can easily imagine an alternative timeline in which Jews showed respect for the customs and traditions of their host and presented themselves as defenders and admirers of Western civilization. I doubt there would be any resentment against Jews if their behavior was of this sort. No one spends their time fretting over the “Mongolian Question.”

In reality, Jewish behavior confirms many of worst stereotypes about their race. They are avaricious, inconsiderate, duplicitous, condescending, materialistic, and aggressive. They cry foul when they endure the slightest criticism, even when they are in the process of destroying others like in their recent attack on Lebanon, or egging on Bush/Cheney to attack Iraq, Syria, and Iran.

Not all Jews are of this sort. The Jewish community is divided on all sorts of issues. Aside from the neocons, American Jews are more concerned with domestic policy than foreign policy. Jewish wealth and the disproportionate representation of Jewish voices in academia, government, business, and the news and entertainment media has created a pro-Jewish bias in American culture and public policy that would otherwise not exist. This has come at the expense of other groups like the Palestinians and racially conscious white Americans whom Jews count amongst their ethnic enemies.

It doesn’t suit us as Whites for Jews to continue to enjoy privileges like their immunity from criticism or their vast fortunes. This is the gist of the Jewish Question.

To which I responded:

The US has the Latino Question, and Europe has the Muslim Question. Both are really the Immigration Invasion Question, which is: whose interests are served by permitting millions of impoverished, uneducated, hostile aliens to flood any nation? These questions trace back and are in fact subordinate to the Jewish Question. Which is how I became aware of it.

The question “are jews White” is exactly what you need to consider to understand why there is a JQ to begin with, and to contemplate answers. That these questions are taboo, while the anti-racist questioning of Whiteness is not, reveals at least two prongs of anti-White aggression. So I cannot agree that there are more important questions to consider.

The question “are jews White” was new to me and still fresh in mind when I wrote Committing PC’s Most Mortal Sin. I was exposed to it by an article written by E. Michael Jones called Francis’s Legacy:

The last time I saw Sam Francis, it was at a meeting in Washington. Sam was the moderator at a talk given by John Tyndall, a leader of the National Front in England. Mr. Tyndall was trying to get us enthused about being white guys, and so he launched into a peroration about the glories of Elizabethan England. Since Elizabethan England was the place where Catholic priests, like Edmund Campion, SJ, could be hanged until not quite dead, drawn and quartered and have their entrails thrown into boiling oil for the crime of saying the Mass, I was less than enthralled by the picture Mr. Tyndall had painted for us. In fact, if his intention was to bring us all together, his talk had the exact opposite effect. Since both Father Campion and Lord Burghley and his henchman Walsingham were all white, just what meaning did this fact possess?

My friend Gerry Bruen must have been entertaining the same thoughts because after Mr. Tyndall finished his speech, Gerry asked him whether “the Irish are white.” The question annoyed Mr. Tyndall, who got a disgusted look on his face and said, “Of course, the Irish are white. My mother is Irish.”

At this point, Sam Francis broke into the discussion, and turning to Mr. Tyndall, he asked, “Are Jews white?” Mr. Tyndall was taken aback by the question. After a long pause, he turned to Sam and said, “I’ll have to get back to you on that one.” So today I’d like to honor the memory of Sam Francis by trying to answer his unanswered question: “Are Jews White?

Jones believes that the root of America’s cultural divide is not race, but religion. Besides Sam Francis the story intertwines Catholics, Leo Pfeffer and the Neoconservatives, Kevin MacDonald, the NAACP, Mearsheimer & Walt, and the SPLC. Jones ends with an appeal to spirituality and Logos I find moving but unconvincing:

In the end, when Father Scalia entered his hospital room and asked him if he wanted the sacraments of the Church, Sam Francis chose the Higher Logos, and we can honor him by choosing the cause of Logos as we enter the next phase of the culture wars. Both Sam Francis’s deathbed conversion to Catholicism and the persecution of John Sharpe are symbolic of a shift in the culture wars. The offensive launched by the Southern Poverty Law Center is the best indication I can offer that the main front in the culture wars is now the confrontation between Jews and Catholics. The Enlightenment is finally dead. There are no more quasi-Masonic movements, where each of us can rise above whatever sect he belongs to and join the Lodge known as “conservatism” or liberalism, or whatever. I think we, no matter what our religious or ethnic background, should rejoice at this development because in this confrontation 1) the Church has both a history and a set of beliefs that will lay to rest forever the charge of anti-Semitism and destroy it as a tool of political oppression and 2) because no matter how much they want to finesse the attack by focusing on what they consider fringe groups, the Jews have taken on a considerable group of people, who will react eventually to the attack. The situation in Hungary now is a case in point.

And finally, we should be happy because the attack clearly defines the terms of engagement, all of which are all spiritual. The revolutionary Jew is our enemy because he is a rejecter of Logos, not because of his DNA. We are not anti-Semites because we oppose the machinations of the revolutionary Jew. No, we are true Christians because of that, as the Church from the time of St. Peter onward has proclaimed. Like St. Peter and St. Paul, we are suffering at the hands of the Jews, “the people who put the Lord Jesus to death, and the prophets too. And now they have been persecuting us, and acting in a way that cannot please God and makes them the enemies of the whole human race” (I Thess 1:15).

We are now engaged in a battle which has ebbed and flowed over the centuries, but the sides in this battle have not changed. What has changed are the odds. The Jews have never been stronger; the Catholics have never been weaker, but the outcome of spiritual battles–and the battle for the soul of the West, as Tolkien knew, is a spiritual battle–no matter what the odds, is rarely predictable. If St. Paul, representing the Christian position, has to say, “When I am weak, I am strong.” Then the revolutionary Jew, representing the opposite position has to say, “When I am strong, I am weak.” We are outgunned on every front in the culture wars, but that is no reason for despair, if we follow the Logos that St. Paul followed, because he was outgunned by the Jews too, outgunned but not undone, saying, “We are hard pressed on every side, but not crushed; perplexed, but not in despair; persecuted, but not abandoned; struck down but not destroyed.”

The Catholic heirarchy and broader Christian leadership stand alongside the vast majority of jews in support of the immigration invasion and, by implication, the liquidation of Whites. So I disagree with Jones’ claim that the main confrontation is between Jews and Catholics. The confrontation I care about is between Whites and the people actively demoralizing, displacing, dispossessing, and disenfranchising them.

Jones is wrong about DNA. DNA is more important than anything else in determining low-level personality traits. Traits that ultimately express themselves in higher forms as ethics, morals, and culture. There is some feedback flowing the other direction, but the driving force is DNA. Some races, ie. genetic clusters, produce more morons, and some produce more geniuses. Likewise sociopaths who crave infinite wealth or totalitarian power and to best achieve these aims gravitate toward, foment, and revel in revolution.

The denial of such truths is akin to Lysenkoism, both in contradiction of biological reality and in the dependence on repressive political and social tactics. We call these tactics Hate Laws and Political Correctness, which suppress truth primarily by suppressing questions.