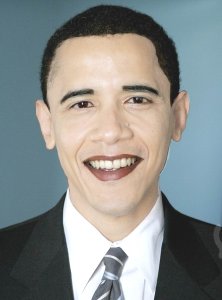 From the transcript of Tuesday’s CNN primary coverage:

DAVID GERGEN, CNN SENIOR POLITICAL ANALYST: It is more disquieting news I think for Barack Obama as he looks for the general election.

COOPER: One in five I think.

GERGEN: It was about 21 percent that race was a factor. Nine out of ten of those voted for Hillary Clinton.

COOPER: And that is people that would admit it to a complete strangers taking these exit polls theoretically it would be even larger those who would not admit it.

GERGEN: And from her point of view, over a quarter of the people who voted for her today in Kentucky were people who said race was a factor in their decision. And it really means — I mean, she’s been talking about sexism in this race and she has complained about some in the last 24 hours.

You know race is really playing an increasing issue. And it also raises the question in my judgment of whether she shouldn’t say, you know, if you want to vote against him because he’s black, I don’t want your vote. I don’t want to win that way. This has no place in this primary.

COOPER: Do you see her saying that?

I see no reason why she couldn’t take the high road here in the closing days of his campaign and try to take this on and take on the Reverend Wright issue to say, “Look, I campaigned with this fellow for 15 months. I know a lot of you people don’t think he shares your values that somehow Barack thinks like Reverend Wright. Not true. I know him. I have been with him. And race should come out of this.”

I think she could do a lot by taking a high road.

COOPER: Reverend Wright also showed up in these exit polls.

GLORIA BORGER, CNN SENIOR POLITICAL ANALYST: Well, in the state of Kentucky, 54 percent of the voters said Barack Obama shares the views of Reverend Wright. That’s something we saw also in West Virginia.

And does Barack Obama share your values? 53 percent of the voters in Kentucky said, “No, he doesn’t.” This is some of the repair work that he’s got to do in terms of the voters that Hillary Clinton is getting.

JEFFREY TOOBIN, CNN SENIOR LEGAL ANALYST: Hillary Clinton ought to keep in mind, I think, the long view here. She’s got many more years in public life ahead of her. Taking the high road at this point, saying I don’t want racists to vote for me, saying that this is about something bigger than just strategizing the last few races. I think that would stand her in very good stead.

BORGER: Very late for that. What in Montana and South Dakota?

TOOBIN: I mean, she might as well say it, because I think it would make a difference. This race has been so polarized along the issues of race and, frankly, I think most people blame her for that than they blame Obama. And to leave, if she’s in fact leaving on the high road, would do a world of good.

GERGEN: She could do it on Reverend Wright. She could still take that on before she leaves this race.

For a while now the pundits have been expressing concerns that the White vote is going 60-40 or even 70-30 for Clinton. They generally don’t think the black vote going 80-20 or 90-10 for Obama is more noteworthy, and it certainly isn’t ever something they criticize. If anything they tell us this is perfectly understandable.

On Tuesday all was good and right in Oregon, where the “more highty-educated” Whites voted in large numbers for Obama. There was however a problem in Kentucky. There poor, under-educated, “working class” Whites had failed to act as the pundits desired:

GERGEN: It was about 21 percent that race was a factor. Nine out of ten of those voted for Hillary Clinton.

David Gergen and Jeffrey Toobin translated this into a call for Clinton to disown the “redneck” vote, to distance herself from “racists”.

Note the conclusion they’re juming to: if race is a factor for you, and you are White, and you vote for Clinton, then you are a racist.

Anti-racists pride themselves on being hyper-sensitive to and hyper-critical of any whiff of demonization or hate. But in this case they seem more than willing to set those concerns aside. They seem not at all skeptical or objective or sympathetic when nasty things are said about Whites. In fact they seem absolutely gleeful and eager to add their own bile.

Pandagon, for instance, thought this was worth highlighting:

Kentucky has one of the country’s highest proportions of people who are not college graduates.

If you read the CNN transcript you can see this echoes what the “more-educated” Blitzer and King were talking about just before Gergen burbled out his hate. The assumption is that “smart” people vote for Obama. Because like, duh, anything else is just racist.

Momocrat thought this nasty slander was worth repeating:

On our chat last night, a Kentucky voter joined in during the last hour to say that in rural parts of her state, people are literally being told that Barack Obama is the anti-Christ. And people believe it! And the MSM pundits wonder why Obama didn’t spend much time in West Virginia and Kentucky?

Hmmmm. Or maybe Obama didn’t do well because he didn’t spend much time there. Maybe?

Please blog this, tweet this, and digg this. Let’s get some legs under what really was an historic moment in TV.

Time to crap on Whites! Get some legs under this! It’s historic!

Or is it just mind-numbingly normal?

All sarcasm aside, there’s a far more substantial problem here. What the anti-racists are doing is demonstrating their own hypocritical hate. They do so not only by being willfully blind to reasonable explanations Whites have to poll and vote as they did, but also by so thoroughly misinterpreting the statistics. They are eager to see only the “racism” they want to see.

I realize I have to explain this in more detail. This is because the media, our schools, and the liberal anti-racists who run them have done a very thorough job of brainwashing everyone that White = racist, and racist = bad. Please be patient and read on. I’ll spell it out as clearly as I can, especially for the benefit of the outraged anti-racist liberals who may drop by.

My first thought on hearing so many Whites had told pollsters that race was a factor for them was, gee, that’s awfully honest. Whites don’t expect applause for speaking frankly about race. In fact, they expect exactly the opposite. The topic is a minefield. Consider for example how the recent comments of Geraldine Ferraro and Bill Clinton have been greeted.

My second thought was, well of course race is a factor for White voters. There were those revelations about Obama spending 20 years associating with Reverend Wright, a man who has spouted all sorts of black-centric and anti-White rhetoric, which many blacks have said they do not find objectionable or even out of the ordinary. Then there was Obama’s “bitter, clinging” statement. That certainly made it seem as though he didn’t understand or sympathize with working class Whites. Then there was his “typical White person” characterization of his grandmother. Do you think Whites without a college degree may have heard that blacks are voting 90-10 for Obama? Perhaps they think what’s good for the goose is good for the gander.

Last of all, probably because the media has gone to lengths to keep it buried, there is Michelle Obama’s thesis, which revolves around her blackness and her concern for the black community. In fact it’s all about race!

Can an honest person sum up all these things as having to do with race? Which of them is not a legitimate concern? Can an honest White get credit for being honest? Why are Whites the only group whose voting patterns are not only scrutinized but criticized?

Everyone in the CNN studio Tuesday night was well aware of Wright. The exit polls reflected his impact. Were the pundits not listening? Apparently not. A few months ago David Gergen defended Obama by downplaying the importance of these race-related issues. He thinks anyone who can’t set aside Wright and overlook Obama’s gaffes must be irrational and is therefore a racist.

Other pundits seem equally blind and/or biased. They find it easier to accuse Whites of being stupid and ethnocentric than to admit that Obama and the people he associates with are more overtly ethnocentric. They can’t face the possibility that Whites are justified in not liking or trusting Obama. They’d sooner slur and defame Whites than accept the possibility that Whites are right.

For some strange reason the answers to these questions are not easy to find. It’s surprising because CNN, and especially the AP story cited by Pandagon, reported plenty of statistics about Whites. They could have provided the black numbers for comparison, but they didn’t. Wouldn’t it have helped illustrate how Whites differed? Wouldn’t it just be fair and informative to provide those numbers?

Seven in 10 whites overall backed Clinton in Kentucky, including about three quarters of those who have not completed college.

No black statistics. I’d like to have the raw data CNN and AP used, but they don’t offer it, and I can’t find it.

WaPo, however, did provide some important numbers:

In Kentucky, Obama won by better than 9 to 1 among black voters, but they made up just 9 percent of the electorate.

So more than 90% of blacks voted for Obama. Wow. CNN and AP didn’t mention that.

What’s more intriguing is that 8-9% of Obama’s voters were black and 10% of the voters who said race matters voted for Obama. What was the overlap between these groups? Might it have been larger than the 19% of Clinton’s White voters who said race matters? In other words, could a deeper examination of these statistics reveal that race was just as much or more of a factor for Obama’s black voters than it was for Clinton’s White voters?

Did David Gergen or Jeffery Toobin or anyone else in the CNN studio that night think such thoughts? Why did Gergen use the epithet “redneck” in explaining the thoughts he did have? Why didn’t anyone there object to that epithet or the hateful anti-White conclusions he and Toobin were jumping to?

Gergen and Toobin and the anti-racist bloggers who consider them heroes think a large fraction of Whites saying race affects their vote is wrong, something to be concerned about, something to renounce. But it seems likely Obama’s black voters are equally human. If White voters who say race is a factor are racist, then aren’t blacks who say it racist too?

Will CNN or AP share their raw data? Will Gergen and Toobin or any other media pundit go on prime time cable to apologize to Whites? Or will they call on Obama to reject the votes of black racists? Are there any liberal anti-racist bloggers who will admit they made a mistake and renounce their own anti-White hate?