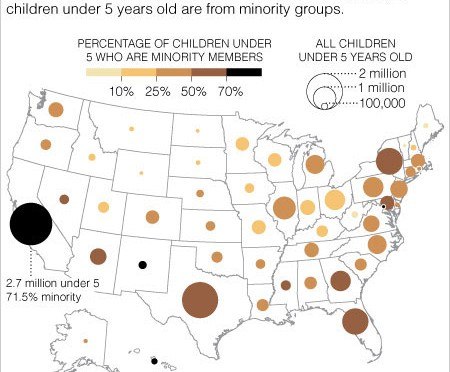 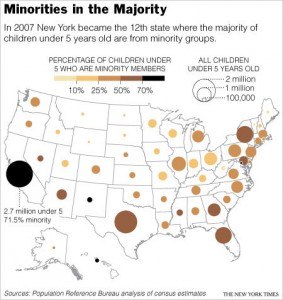 8. Is Person 1 of Hispanic, Latino, or Spanish origin?

Is Person 1 of Hispanic, Latino or Spanish origin?

Asked since 1970. The data collected in this question are needed by federal agencies to monitor compliance with anti-discrimination provisions, such as under the Voting Rights Act and the Civil Rights Act. State and local governments may use the data to help plan and administer bilingual programs for people of Hispanic origin.

What is Person 1’s race?

Asked since 1790. Race is key to implementing many federal laws and is needed to monitor compliance with the Voting Rights Act and the Civil Rights Act. State governments use the data to determine congressional, state and local voting districts. Race data are also used to assess fairness of employment practices, to monitor racial disparities in characteristics such as health and education and to plan and obtain funds for public services.

Celebratory media reporting on the predicted demise of the White majority – Minority births on track to outnumber white births  | ajc.com:

Minorities make up nearly half the children born in the U.S., part of a historic trend in which minorities are expected to become the U.S. majority over the next 40 years.

The numbers are growing because immigration to the U.S. has boosted the number of Hispanic women in their prime childbearing years. Minorities made up 48 percent of U.S. children born in 2008, the latest census estimates available, compared to 37 percent in 1990.

Right now, roughly 1 in 10 of the nation’s 3,142 counties already have minority populations greater than 50 percent. But 1 in 4 communities have more minority children than white children or are nearing that point, according to the study, which Johnson co-published.

That is because Hispanic women on average have three children, while other women on average have two. The numbers are 2.99 children for Hispanics, 1.87 for whites, 2.13 for blacks and 2.04 for Asians in the U.S. And the number of white women of prime childbearing age is on the decline, dropping 19 percent from 1990.

Multiracial no longer boxed in by the Census – USATODAY.com:

When Barack Obama was elected the nation’s first black president in 2008, some academics and political analysts suggested the watershed event could represent the dawning of a post-racial era in a land that has struggled over race relations for four centuries.

At the same time, growing ethnic and racial diversity fueled by record immigration and rates of interracial marriages have made the USA’s demographics far more complex. By 2050, there will be no racial or ethnic majority as the share of non-Hispanic whites slips below 50%, according to Census projections.

“It’s showing that tomorrow’s children and their children will in fact be multiracial, leading to a potential post-racial society,” says William Frey, demographer at the Brookings Institution.

“The issue isn’t just multirace,” says Census historian Margo Anderson, professor at the University of Wisconsin-Milwaukee. “It’s the blurring of the very traditional black vs. white. Categories that held until about 1980 are shifting in large numbers. … The clarity is breaking down.”

The image above comes from Rise in Minorities Is Led by Children, Census Finds – New York Times.

Under Title VII of the CIVIL RIGHTS ACT OF 1964, plaintiffs may sue employers who discriminate on the basis of race, color, gender, religion, or national origin. Employers who intentionally discriminate are obvious candidates for a lawsuit, but the courts also allow plaintiffs to prove liability if the employer has treated classes of people differently using apparently neutral employment policies. The disparate impact theory of liability will succeed if the plaintiff can prove that these employment policies had the effect of excluding persons who are members of Title VII’s protected classes. Once disparate impact is established, the employer must justify the continued use of the procedure or procedures causing the adverse impact as a “business necessity.”

This legal theory has the effect of excluding Whites.

The Office of the Special Adviser on the Prevention of Genocide:

The Convention on the Prevention and Punishment of the Crime of Genocide (1948) defines genocide (article 2) as “any of the following acts committed with intent to destroy, in whole or in part, a national, ethnical, racial or religious group…” including:

All such acts are violations of human rights, and may also be crimes against humanity or war crimes, depending on the context in which they were committed. The Convention confirms that genocide, whether committed in time of peace or war, is a crime under international law which parties to the Convention undertake “to prevent and to punish” (article 1). Because it is a part of international customary law the Convention is considered applicable in all countries, irrespective of whether they have signed or ratified it.

Mass immigration and anti-White legal theories of “protected classes” are genocidal. Whether the intent was initially anti-discrimination or not is irrelevant. The result, made plain by census monitoring, is the physical destruction of the native White population.