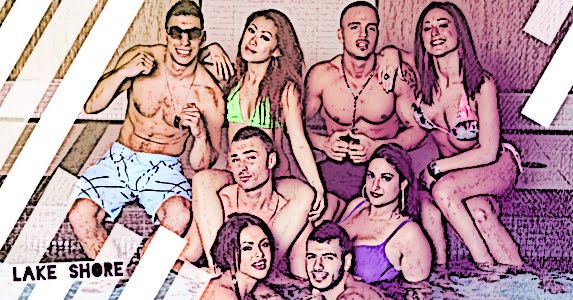 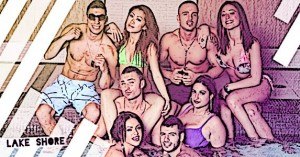 Cast of Toronto’s Lake Shore even more despicable than cast of Jersey Shore. Go see the video. You’ll want to have an empty stomach.

One of the producers describes the show as: “a peek into what Toronto is like as a multicultural city.” That peek includes a jew, a Turk, an Albanian, a Lebanese, a Pole, an Italian, a Czech, and a Vietnamese, each loudly revelling in their alien identity. Seeing how they behave, it’s no surprise none of them want to live among their own kind, or that they don’t like each other either.

Somehow the producers got the strange idea they could sell this dystopian train wreck as a utopian sex party. Indeed, there’s trouble in paradise – but it’s not about any negative reflection on Toronto or the lack of people with northwest European heritage. Fast forward to 7:50 of the Lake Shore Sizzle Reel to see the real problem.

But while Lake Shore is poised to begin production as early as next week, media and advertising experts say the program’s search for a major network backer could be in jeopardy thanks to a publicity-grabbing trailer posted on YouTube in which one of the show’s characters expresses her hatred for Jews.

“It’s already tough for Canadian productions to garner an audience so this one probably thought they could try something drastic,” said Florence Ng, president of the broadcast video investment division at Toronto ad agency ZenithOptimedia.

“When something controversial happens, regardless of what it’s about, it definitely would have some impact in terms of [advertisers’] intent to get involved. Nobody wants to get into any kind of controversial situation and I think for [the producers], they’re probably pushing the envelope.”

“I’m not racist because I hate everybody equally, especially Jewish people,” professes Sibel Atlug, a 23-year-old loud-mouthed woman cast as “the Turk.” The comments come during a mud-flinging free-for-all in which cast members share first impressions of their future housemates.

The show is the brainchild of executive producer Maryam Rahimi and Toronto television personality George Tsioutsioulas. A scheduled interview with Mr. Tsioutsioulas was cancelled by the production’s publicist yesterday. But in an e-mailed statement, the show’s producers said the trailer is a small snippet of a show that exposes what happens when you put eight people from all walks of life into a house together. “A promo reel is not a true representation of the whole story and should not be interpreted that way,” the statement said.

” Lake Shore will expose stereotypes in order to break them down, bridge relationships and show young Torontonians enjoying life and all the adventures that come their way.”

Bernie Farber, CEO of the Canadian Jewish Congress, said Ms. Atlug’s comments perpetuate a pervasive sentiment that it is “still OK” for people to say openly that they hate Jews.

“We seem to have entered an epoch where basically anything goes,” he said. “People are free to watch whatever they want, to be as stupid as they want, and as insensitive as they want. But we still have to live with each other.

“If you’re going to make a show about outrageous people misbehaving, I suppose among the things people do when they’re misbehaving is to say things that are racist, sexist or anti-Semitic,” Prof. [Bob] Thompson [a popular culture professor at Syracuse University] said.

In a brief interview with Farber, The Trouble With LakeShore, via ShalomLife, we hear that:

Farber doesn’t think the show should be banned. However, he wonders if the comment would have been left in had it been about a different ethnic group, calling anti-Semitism “a longstanding virus that never seems to go away.”

He goes on to say that while he feels Canadians understand what the show is all about, he wants people to realize that the real issue is about a “producer who is trying to manipulate you using sex and racism and all that other kind of junk to attract an audience.”

The moral of the story is that anything goes, except for outrageous misbehavior that outrages jews. They won’t call for anything to be banned or anyone to be fired – unless their condemnations and economic threats don’t get results.

I’m wondering whether any other ethnic group so unselfconsciously projects their own nature by imagining their enemies as “a longstanding virus that never seems to go away.”

10 thoughts on “The Multicult Ideal for Canada”