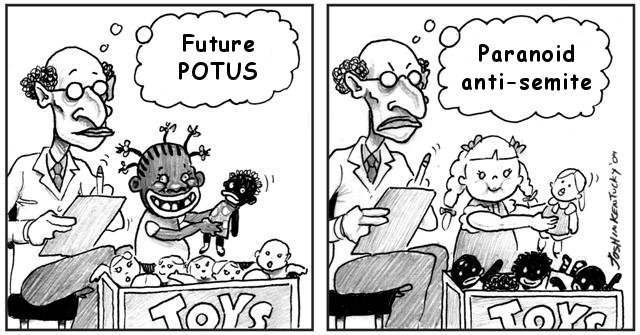 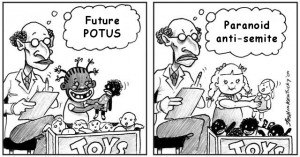 Previous letters have correctly noted and decried ex-Senator Hagel’s anti-Semitism but have focused on secondary concerns rather than the core of his mindset. To seize on this or that hostile comment regarding Israel or Israeli policy is besides the point, regardless of how off base they may be.

The essence of Hagel’s anti-Semitism is the sort expressed by such classics of paranoid anti-Semitica as “The Protocols of the Elders of Zion” or the works of Henry Ford. Like them, Hagel believes a sinister pro-Israel/Jewish cabal acts like a puppeteer pulling the strings of members of an “intimidated Congress” and has turned the State Department (hardly noted for its philo-Semitism or support for Israel) into an “adjunct of the Israeli Foreign Ministry.”

The campaign against Hagel’s nomination failed precisely because no one — none of the Jewish organizations that attacked him or his adversaries on the Senate Armed Services Committee — had the moral courage to call Hagel what he is: a political anti-Semite. Lindsey Graham came closest, but was loath to pull the trigger.

That Senators Blumenthal, Levin and Schumer remained silent — indeed Schumer played the smarmy role of his Jewish enabler — is contemptible in the extreme.

I’m wondering if this is Stephen Steinlight of the Center for Immigration Studies? The name, residence, and hyper-jewish identities match. What doesn’t quite fit is that CIS-Steinlight has claimed:

Then again, he also said:

Jews are disproportionately involved in every kind of insanity.

I’ve emailed CIS-Steinlight to ask if he is JTA-Steinlight. Though it would be an interesting revelation, it’s tangential to the main point here.

A brief news item from the same source on the same day had this to say about a portion of the very real jewish cabal and a few of its star puppets. Senate confirms Hagel, JTA – Jewish & Israel News, February 26, 2013:

Among the Republicans voting to push the nomination were a trio of Hagel’s toughest pro-Israel critics, Sens. John McCain (R-Ariz.), Kelly Ayotte (R-N.H.) and Lindsey Graham (R-S.C.). All three voted against his actual confirmation, which needed only a simple majority to pass.

A number of centrist Jewish groups, including the Anti-Defamation League and the American Jewish Committee, had expressed concerns about past Hagel comments, particularly his claim in 2006 that a “Jewish lobby intimidates” Congress, as well as his skepticism of sanctions and military moves that would keep Iran from advancing its suspected nuclear weapons program.

Jewish domination of US policy and political discourse has been increasing, and increasingly obvious, for decades. The jewish debate over Hagel, which raged for years and only broke into the mainstream last December, has all along been based on conflicting opinions about what’s best for Israel. Hagel had to seek and win the endorsement of various senate jews and heavyweights in organized jewry before the puppets on the senate subcommittee even got their chance to give him any grief. When they did it was all about Israel.

Jews have enormous power. Though they argue incessantly about their best interests, ultimately enough of them decided that Hagel may just serve those interests well enough. Of course there are still many jews, like Steinlight, even this level of jewish domination fails to please, and who instead imagine America is dominated by sinister anti-jews.

If Steinlight’s ravings alienate and disgust you then it’s time to show some moral courage and face the facts about jewish power. You could start by tuning in to “The International Jew” Study Hour to hear what Ford and his writers had to say, supplemented by the insightful contemporary commentary of Carolyn Yeager and Hadding Scott.

6 thoughts on “The Hagelcaust: Confirmed”