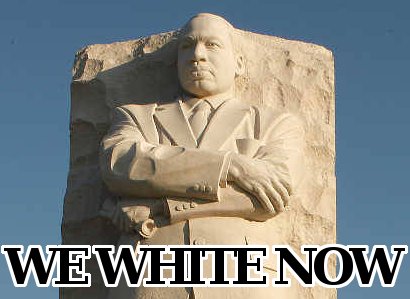 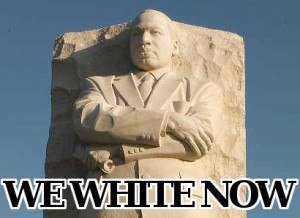 Many people know that Martin Luther King was not the virtuous saint the jewsmedia propaganda portrays him as. This is only the most blatant aspect of the fraud that has been perpetrated for the past fifty years. The more subtle yet far more significant apsect of this fraud has been the promotion and celebration of a short string of ambiguous words – a promise of hope and change disingenuously offered and naively accepted.

Here is just one perfectly typical example of the jewsmedia aiding and abetting the ongoing fraud, describing two starkly different perceptions of this string of words and attributing that difference to political partisanship rather than race.

“I have a dream that my four little children will one day live in a nation where they will not be judged by the color of their skin but by the content of their character.”

This sentence spoken by the Rev. Martin Luther King Jr. has been quoted countless times as expressing one of America’s bedrock values, its language almost sounding like a constitutional amendment on equality.

Yet today, 50 years after King shared this vision during his most famous speech, there is considerable disagreement over what it means.

For at least two of King’s children, the future envisioned by the father has yet to arrive.

“What my father is asking is to create the climate where every American can realize his or her dreams,” he says. “Now what does that mean when you have 50 million people living in poverty?”

Bernice King doubts her father would seek to ignore differences.

For many conservatives, the modern meaning of King’s quote is clear: Special consideration for one racial or ethnic group is a violation of the dream.

The quote is like the Declaration of Independence, says Roger Clegg, president of the Center for Equal Opportunity, a conservative think tank that studies race and ethnicity. In years past, he says, America may have needed to grow into the words, but today they must be obeyed to the letter.

“The Declaration of Independence says all men are created equal,” Clegg says. “Nobody thinks it doesn’t really mean what it says because Thomas Jefferson owned slaves. King gave a brilliant and moving quotation, and I think it says we should not be treating people differently on the basis of skin color.”

Last week, the RightWingNews.com blog included “The idea that everyone should be judged by the content of their character, not the color of their skin” in a list of “25 People, Places and Things Liberals Love to Hate.”

“Conservatives feel they have embraced that quote completely. They are the embodiment of that quote but get no credit for doing it,” says the author of the article, John Hawkins. “Liberals like the idea of the quote because it’s the most famous thing Martin Luther King said, but they left the principles behind the quote behind a long time ago.”

“To ignore color is to ignore reality,” says Lewis Baldwin, an Alabama native who marched in the civil rights movement and now teaches courses on King at Vanderbilt University.

“Dr. King understood that we all see we are different. You accept color differences, affirm them, celebrate them, but don’t allow them to become a barrier to human community,” said Baldwin, author of a new King book, “In A Single Garment of Destiny: A Global Vision of Justice.”

To reduce race to skin color, to the point of equating the two, is to willfully distort reality. Long before King’s speech this distortion and others were promoted by Franz Boas, whose followers included it in anti-“racism” propaganda they produced in the 1940s.

Fraud works to the extent that the lie it is based on appears plausible on the surface. In this case the thinking goes like this: Race is just skin color, and color is unimportant, therefore race is unimportant. The article excerpted above depicts “liberals”, i.e. blacks enabled and led by jews, as pimping this lie that they themselves don’t believe. “Conservatives”, i.e. Whites, are depicted as the only ones who have really taken King’s demagoguery to heart, misunderstanding its true meaning and intent.

Skin color is only the most obvious racial difference. The lie is that it is the only significant difference, which disguises the fact that the content of character is too. In this light, what King actually said is revealed as tautological nonsense:

I have a dream that my four little children will one day live in a nation (amongst those of common heritage, race) where they will not be judged by their race but by their race.

Taking King at his word is “racist”. The stark differences in understanding and reaction to what King said is itself a reflection of racial differences in character. Whites buy the lie. Non-Whites don’t. Whites have deliberately shared and conceded power, setting aside their racial identity and group interests. Blacks, in contrast, have followed the lead of white-skinned jews. They shamelessly promote their own identities and group interests. The fraud comes through clearly in the rhetoric. The supposed ideal is equality, which can supposedly only be attained by celebrating differences, with the most important difference being that Whites must continue to defer to the moral authority and superiority of non-Whites.

The differences are as much in each groups’ thoughts as in their genes.

It’s high time for Whites to recognize the fraud, to assess the terrible cost of the false belief that race is just skin color and doesn’t matter, to take heed of what non-Whites actually mean and do rather than blindly trusting what they say. Wake up. End the nightmare.