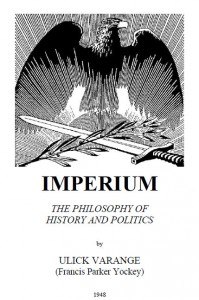 Yockey viewed liberalism as rooted in and a product of Western philosophy.

rationalism, in Western philosophy, the view that regards reason as the chief source and test of knowledge. Holding that reality itself has an inherently logical structure

Rationalism has long been the rival of empiricism, the doctrine that all knowledge comes from, and must be tested by, sense experience.

In the debate between empiricism and rationalism, empiricists hold the simpler and more sweeping position, the Humean claim that all knowledge of fact stems from perception. Rationalists, on the contrary, urge that some, though not all, knowledge arises through direct apprehension by the intellect. What the intellectual faculty apprehends is objects that transcend sense experience—universals and their relations. A universal is an abstraction, a characteristic that may reappear in various instances: the number three, for example, or the triangularity that all triangles have in common. Though these cannot be seen, heard, or felt, rationalists point out that humans can plainly think about them and about their relations.

Continuing with Ulick Varange (Francis Parker Yockey) — Imperium, p 205, the section titled, The Two Political Anthropologies (those which posit a “naturally good” human nature, like liberalism, and those which see human nature as it is):

The leading 17th century political thinkers, like Hobbes and Pufendorff, looked upon the condition of “nature,” in which States existed, as one of continual danger and risk, in which those engaged in action were driven by all the instincts and impulses of the beasts — hunger, fear, jealousy, rivalries of all kinds, desire. Hobbes observed that true enmity is possible only between men, that the friend-enemy disjunction is as much deeper between men than between animals as the world of men is spiritually above the world of the beasts.

The key difference is that man has language, history and culture – and thus can coordinate and organize more comprehensively, across time as well as space. Consider, as an example of the depth of true enmity, the jews’ dictum: Never forgive, never forget.

The two political anthropologies are illustrated in the story, found in Carlyle, of the conversation between Frederick the Great and Sulzer, in which Sulzer was explaining the new discovery of Rationalism that human nature was essentially good. Ach, mein lieber Salzer, Ihr kennt nicht diese verdammte Rasse, said Friedrich — “You don’t know this damned race.”

The assumption of the goodness of human nature developed two main branches of theory. Anarchism is the result of radical acceptance of this assumption. Liberalism uses the assumption merely to weaken the State and make it subservient to “society.” Thomas Paine, an early Liberal, expressed the idea in a formula that remains valid for Liberalism today: Society is the result of

our reasonably regulated needs; the State is the result of our vices. Anarchism is the more radical in proportion to the completeness of its acceptance of the human goodness assumption.

The idea of “balance of power,” a technic [technology or science] of weakening the State, is Liberal throughout. By this means the State is to be rendered subject to economics. It cannot be called a State theory, for it is a mere negative. It does not deny the State completely, but wants it decentralized and weakened. It does not want the State to be the center of gravity of the political organism. It prefers to think of the organism as “society,” a loose grouping of free and independent groups and individuals, whose freedom finds its sole limitation with the customary criminal law. Thus Liberalism has no objection to individuals being more powerful than the State, being above the law. What Liberalism dislikes is authority. The State, as the grandest symbol of authority, is hated. The two noble orders, as the symbols of authority, are likewise hated.

Yockey’s description of liberalisms symptoms fit, but his anthropomorphization of it – assigning it human-like motives and emotions – doesn’t. Rather than seeing liberalism as a philosophy about the meaning of humanity and society, he saw them both as integrally connected to liberalism, in contradistinction to politcal organisms and the friend-enemy disjunction, Law of Totality and Law of Sovereignty which define them.

Anarchism, the radical denial of the State, and of all organization whatever, is an idea of genuine political force. It is anti-political in its theory, but by its intensity it is political in the only way that politics can manifest itself, i.e., it can bring men into its service and range them against others as enemies. During the 19th century, anarchism was a force to be reckoned with, although it was nearly always allied with some other movement. Particularly in 19th and early 20th century Russia was anarchism a powerful political reality. It was known there as Nihilism. The local strength of anarchism in Russia was owing to its coincidental attractiveness for the tremendous anti-Western feeling under the thin Petrine crust. To be anti-Western was to be against everything, therefore anti-Western Asiatic negativism adopted the Western theory of Anarchism as its vehicle of expression.

“Petrine crust” refers to the influence of Peter the Great, emperor of Russia between 1682 and 1725.

Liberalism, however, with its compromising, vague attitude, incapable of precise formulation, incapable also of rousing precise feelings, either affirmative or negative, is not an idea of political force. Its numerous devotees, in the 18th, 19th and 20th centuries have taken part in practical politics only as the ally of other groups. It could not create an issue; it could not line up men as friends or enemies; therefore it was not a political idea, but only an idea about politics. Its followers had to be for or against other ideas as a means of expressing their Liberalism.

Anarchism was able to rouse men to sacrifice of life, not so Liberalism. It is one thing to die to wipe out all order, all State; it is quite another to die in order to bring about a decentralization of State power. Liberalism is in essence nonpolitical; it is outside of politics. It would like to have politics serve as the handmaid of economics and society.

Liberalism is a most important by-product of Rationalism, and its origins and ideology must be clearly shown.

The “Enlightenment” period of Western history which set in after the Counter-Reformation laid more and more stress on intellect, reason and logic as it developed. By the middle of the 18th century this tendency produced Rationalism. Rationalism regarded all spiritual values as its objects and proceeded to revalue them from the standpoint of “reason.” Inorganic logic is the faculty men have always used for solving problems of mathematics, engineering, transportation, physics and in other non-valuing situations. Its insistence on identity and rejection of contradiction are practicable in material activity. They afford intellectual satisfaction also in matters of purely abstract thought, like mathematics and logic, but if pursued far enough they turn into mere techniques, simple assumptions whose only justification is empirical. The end of Rationalism is Pragmatism, the suicide of Reason.

To unpack that last sentence requires some understanding of the history of philosophy.

pragmatism, school of philosophy, dominant in the United States in the first quarter of the 20th century, based on the principle that the usefulness, workability, and practicality of ideas, policies, and proposals are the criteria of their merit.

More on pragmatism can be found at the Internet Encyclopedia of Philosophy page on John Dewey:

John Dewey was a leading proponent of the American school of thought known as pragmatism, a view that rejected the dualistic epistemology and metaphysics of modern philosophy in favor of a naturalistic approach that viewed knowledge as arising from an active adaptation of the human organism to its environment.

“the light of reason,” without any mystical admixture of thought or tendency whatever. Descartes reasoned the animals into automata, and a generation or so later, man himself was rationalized into an automaton — or equally, an animal. Organisms became problems in chemistry and physics, and superpersonal organism simply no longer existed, for they are not amenable to reason, not being visible or measurable. Newton provided the universe of stars with a non-spiritual self-regulating force; the next century removed the spirit from man, his history and his affairs.

Reason detests the inexplicable, the mysterious, the half-light. In a practical problem in machinery or ship-building one must feel that all the factors are under his knowledge and control. There must be nothing unpredictable or out of control. Rationalism, which is the feeling that everything is subject to and completely explicable by Reason, consequently rejects everything not visible and calculable. If a thing actually cannot be calculated, Reason merely says that the factors are so numerous and complicated that in a purely practical way they render the calculation unfeasible, but do not make it theoretically impossible. Thus Reason also has its Will-to-Power: whatever does not submit is pronounced recalcitrant, or is simply denied existence.

Interesting. Here Yockey attributes the suppression of nationalism and racialism (which separate the poles of individualism and humanism) to rationalism/liberalism, rather than jewish influence. In this I think he was wrong.

8 thoughts on “Yockey on Liberalism – Part 3”