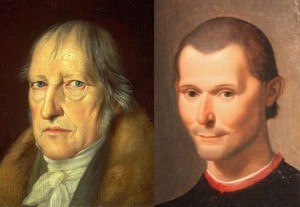 Hegel posited a three-stage development of mankind from the natural community through the bourgeois community to the State. His State-theory is thoroughly organic, and his definition of the bourgeois is quite appropriate for the 20th century. To him the bourgeois is the man who does not wish to leave the sphere of internal political security, who sets himself up, with his sanctified private property, as an individual against the whole, who finds a substitute for his political nullity in the fruits of peace and possessions and perfect security in his enjoyment of them, who therefore wishes to dispense with courage and remain secure from the possibility of violent death. He described the true Liberal with these words.

The political thinkers mentioned do not enjoy popularity with the great masses of human beings. As long as things are going well, most people do not wish to hear talk of power-struggles, violence, wars, or theories relating to them. Thus in the 18th and 19th centuries was developed the attitude that political thinkers — and Macchiavelli was the prime victim — were wicked men, atavistic, bloodthirsty. The simple statement that wars would always continue was sufficient to put the speaker down as a person who wanted wars to continue. To draw attention to the vast, impersonal rhythm of war and peace

showed a sick mind with moral deficiency and emotional taint. To describe facts was held to be wishing them and creating them. As late as the 20th century, anyone pointing out the political nullity of the “leagues of nations” was a prophet of despair. Rationalism is anti-historical; political thinking is applied history. In peace it is unpopular to mention war, in war it is unpopular to mention peace. The theory which becomes most quickly popular is one which praises existing things and the tendency they supposedly illustrate as obviously the best order, and as preordained by all foregoing history. Thus Hegel was anathema to the intellectuals because of his State-orientation, which made him a “reactionary,” and also because he refused to join the revolutionary crowd.

Since most people wish to hear only soporific talk about politics, and not demanding calls to action, and since in democratic conditions it matters to political technics what most people wish to hear, democratic politicians evolved in the 19th century a whole dialectic of party-politics. The idea was to examine the held of action from a “disinterested” standpoint, moral, scientific, or economic, and to kind that the opponent was immoral, unscientific, uneconomic — in fact — he was political. This was devilishness that must be combated. One’s own standpoint was entirely “non-political.” Politics was a word of reproach in the Economic Age. Curiously however, in certain situations, usually those involving foreign relations, “unpolitical” could also be a term of abuse, meaning the man so described lacked skill in negotiating. The party-politician also had to feign unwillingness to accept office. Finally a demonstration of carefully arranged “popular will” broke down his reluctance, and he consented to “serve.” This was described as Macchiavellism, but obviously Macchiavelli was a political thinker, and not a camouflageur. A book by a party-politician

does not read like The Prince, but praises the entire human race, except certain perverse people, the author’s opponents.

Yockey counterposed the liberal, i.e. someone who won’t take his own side, against the “political”, i.e. those who will. Today’s White politicians have “progressed” to the point where they are increasingly anti-White and openly take the side of the non-White Other.

Actually Machiavelli’s book is defensive in tone, justifying politically the conduct of certain statesmen by giving examples drawn from foreign invasions of Italy. During Macchiavelli’s century, Italy was invaded at different times by Frenchmen, Germans, Spaniards and Turks. When the French Revolutionary Armies occupied Prussia, and coupled humanitarian sentiments of the Rights of Man with brutality and large-scale looting, Hegel and Fichte restored Macchiavelli once again to respect as a thinker. He represented a means of defense against a foe armed with a humanitarian ideology. Macchiavelli showed the actual role played by verbal sentiments in politics.

One can say that there are three possible attitudes toward human conduct, from the point of evaluating its motives: the sentimental, the realistic, and the cynical. The sentimental imputes a good motive to everybody, the cynical a bad motive, and the realistic simply seeks the facts. When a sentimentalist, e.g., a Liberal, enters politics, he becomes perforce a hypocrite. The ultimate exposure of this hypocrisy creates cynicism. Part of the spiritual sickness following the First World War was a wave of cynicism which arose from the transparent, revolting, and incredible hypocrisy of the little men who were presiding over affairs at that time. Macchiavelli had however an incorruptible intellect and did not write in a cynical spirit. He sought to portray the anatomy of politics with its peculiar problems and tensions, inner and outer. To the fantastic mental illness of Rationalism, hard facts are regrettable things, and to talk about them is to create them. A tiny politician of the Liberal type even sought to prevent talk about the Third World War, after the Second. Liberalism is, in one word, weakness. It wants every day to be a birthday, Life to be a long party.

The inexorable movement of Time, Destiny, History, the cruelty of accomplishment, sternness, heroism, sacrifice, superpersonal ideas — these are the enemy. Liberalism is an escape from hardness into softness, from masculinity into femininity, from History to herd-grazing, from reality into herbivorous dreams, from Destiny into Happiness. Nietzsche, in his last and greatest work, designated the 18th century as the century of feminism, and immediately mentioned Rousseau, the leader of the mass-escape from Reality. Feminism itself — what is it but a means of feminizing man? If it makes women man-like, it does so only by transforming man first into a creature whose only concern is with his personal economics and his relation to “society,” i.e., a woman. “Society” is the element of woman, it is static and formal, its contests are purely personal, and are free from the possibility of heroism and violence. Conversation, not action; formality, not deeds. How different is the idea of rank used in connection with a social affair, from when it is applied on a battlefield! In the field, it is fate-laden; in the salon it is vain and pompous. A war is fought for control, social contests are inspired by feminine vanity and jealousy to show that one is “better” than someone else.

And yet what does Liberalism do ultimately to woman: it puts a uniform on her and calls her a “soldier.” This ridiculous performance but illustrates the eternal fact that History is masculine, that its stern demands cannot be evaded, that the fundamental realities cannot be renounced, even, by the most elaborate make-believe. Liberalistic tampering with sexual polarity only wreaks havoc on the souls of individuals, confusing and distorting them, but the man-woman and the woman-man it creates are both subject to the higher Destiny of History.

Yockey saw liberalism as springing from the White mind, Western philosophy and specifically Rationalism, originating with John Locke and Jean-Jacques Rousseau in the mid-18th century. More than once Yockey asserted that Rationalism, and thus liberalism, are based on the false premise that man is “good” by nature. He described liberalism as “Rationalism in politics”, a “mere negative” which weakens the State and makes it subservient to “society”, a loose grouping of free independent groups and individuals, a thoroughly liberal construct.

Yockey saw liberalism as “thinking about politics” rather than “political thinking”, opposed to Authority in any form, but most especially the State and the Church. He saw liberalism as outside and in violation of his Laws of Totality and Sovereignty, thus corrosive to political organisms and the friend-enemy disjunction which defines them. “[A]lways and only a disintegrating force”.

Yockey saw liberalism as individualistic, humanistic and materialistic. He noted Jeremy Bentham’s guiding principle, “the greatest happiness of the greatest number”. “The two poles of [Rationalism] are ‘the individual’ and ‘humanity.’ Anything separating them is ‘irrational.'” He deplored that liberalism enables wealthy individuals to become more important than political organisms, and to twist the “rule of law” to serve their own selfish interests. “In earlier times, war-peoples had subjugated trading-peoples, but no longer. Now trading-peoples step out as the masters of the earth.”

New (jewish) masters aside, Yockey saw a deluded sentimentalism in the liberal hope that elevating commerce and economics would end war, the harsh reality being that under this delusion wars had only become more devastating.

“The purest expression of the doctrine of Liberalism was probably that of Benjamin Constant.” Wikipedia contains some hints why Yockey saw Constant this way:

Constant’s repeated denunciation of despotism pervaded his critique of French political philosophers Jean-Jacques Rousseau and Abbé de Mably. These writers, influential to the French Revolution, according to Constant, mistook authority for liberty and approved any means of extending the action of authority.

Regarding the principle of freedom in liberalism Yockey wrote:

It is a mere critique, not a living idea. Its great word “freedom” is a negative it means in fact, freedom from authority, i.e., disintegration of the organism. In its last stages it produces social atomism, in which not only the authority of the State is combated, but even the authority of society and the family.

At the same time a team of jews were hard at work attacking the White family and producing social atomism with The Authoritarian Personality.

However, Yockey saw the influence of jews as distinct from liberalism:

In contrast to liberalism Yockey recommended Ethical Socialism, which Oswald Spengler called Prussianism. Spengler described the Prussian spirit as, “aristocratic virtue, of which few are possessed” and “a proud and exclusive Socialism for men of race, for the elect of life”. In other words the Aryan spirit, or the spirit of National Socialism.

Yockey described “true liberalism” as Hegel’s view of bourgeois – the individual against the whole, who values personal security over courage and a potentially violent death. Liberalism, in one word, is weakness. At the very end he connects liberalism to feminism, “an escape from hardness into softness, from masculinity into femininity”.

Yockey dedicated only 15 pages of his 619-page magnum opus to liberalism. In this series we have only barely probed his thoughts. Yockey’s words and style are deceptively simple. His ideas are rooted in and intertwined with historical and philosophical references which make true understanding difficult, even for those prepared to dig deeper. The effort is worth it, especially for thinkers looking for mental exercise and an excuse to trace through some of the vast history of European political thought. After having done so I can say that those less willing to embark on such excursions should feel no guilt or shame. There are more accessible works – e.g. by Kevin MacDonald or Revilo Oliver – from which one can learn more with less effort.