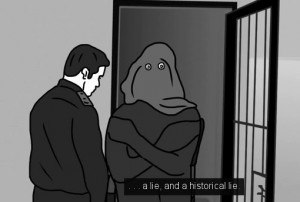 Holo-Heretic Hunters: The Faurisson File (press CC for English subtitles), a video by Bernamej, via The CODOH Revisionist Forum.

This is a brilliant short video, its wry satire all the more disturbing because it only slightly exaggerates the jew-dominated zeitgeist. The story is set in France, where even the slightest whiff of a challenge to the supposed moral superiority of the jews and their ridiculously one-sided historic narrative is met with swift state-backed force. Truth is indeed stranger than fiction. The truth is that in France truth seekers such as Robert Faurisson are demonized, and mere gestures of defiance, such as the quenelle, are criminalized.

During an interview in December 1980 with the French radio network “Europe 1,” Faurisson summarized the result of his historical research in one sentence of 60 French words. Here is that sentence, in English:

“The alleged Hitlerite gas chambers and the alleged genocide of the Jews constitute one and the same historical lie, which made possible a gigantic financial-political fraud, the principal beneficiaries of which are the State of Israel and international Zionism, and whose principal victims are the German people — but not their leaders — and the entire Palestinian people.”

That sentence, he declared 23 years later, “requires no changes.”

I would broaden “State of Israel and international Zionism” to “jews” and “German people” to “White race”, but Faurisson’s statement is only more specific, not incorrect. In addition, this particularly historic lie is rightly seen in perspective as only the most recent and monstrous imposition in a long series of anti-European libels which have been perpetrated by the jews. The jews have, as a collective, always and entirely blamed Europeans, as a collective, though the origin and perpetuation of the conflict is more properly attributed to the interloping, parasitic aliens rather than their unfortunate, indigenous hosts.