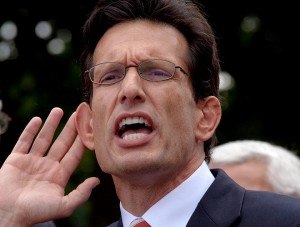 Lefties Drag Cantor’s Jewish Faith Into Shocking Loss, When They May Have Contributed to His Demise, Tom Blumer, NewsBusters:

Perhaps Cantor’s agreement to meet with a group which brazenly announced its intent “to play the Jewish card” to push “immigration reform” (read: illegal-immigrant amnesty), and who apparently have no problem with “wiggle-waggling the legal system” to get it done, sufficiently cemented a perception in GOP voters’ minds that he would inevitably sell out loyal constituents who had previously sent him to the House seven times.

If so, whose fault is that? Answer: Liberal Jews “playing the Jewish card” who thought that Eric Cantor was untouchable — and were emphatically proven wrong.

Cantor was – and for now, remains – the No. 2 Republican in a conference of 233 lawmakers. But for Jewish Republicans, Cantor is a singular figure, the only Jewish member of the House majority and the lone Jewish leader in a party that has strenuously courted the community in recent presidential elections, to little avail.

Now, with Cantor’s defeat, there’s no longer a point man to help organize trips to Israel for junior GOP lawmakers, as Cantor routinely did. Jewish nonprofits and advocacy groups have no other natural person in leadership to look to for a sympathetic ear. No other Republican lawmaker can claim to have precisely the same relationship with gaming billionaire Sheldon Adelson, a primary benefactor of both the Republican Party and the Republican Jewish Coalition.

And no other member can play quite the same role in promoting Jewish Republican congressional candidates, as Cantor did in one election after another.

As Democrats seek to cement a public perception of the GOP as an intolerant and homogenous party, the defeat of the nation’s leading Jewish Republican over his support for more relaxed immigration laws can only help.

Rabbi Jack Moline, executive director of the National Jewish Democratic Committee, called it an especially bitter pill that Cantor went down to a challenger running to his right on immigration – as Moline put it, that Cantor “has been undone by an issue that they didn’t make much progress on, but that is reflective of Jewish values.”

“From the point of view of a Democrat, I’m not disappointed to see him go,” Moline said, acknowledging: “There is always a pride in the Jewish community when one of our own makes good, as I think there is in every community.

If Cantor played a critically important symbolic role for Republican Jews, it’s unclear whether his defeat will bring immediate consequences for policy. The GOP is a staunchly pro-Israel party, even if many of its members may have never set foot in a synagogue.

Former White House press secretary Ari Fleischer, who serves on the RJC board, said that from a historical perspective Cantor’s defeat was “very sad – but my politics don’t revolve around my identity as much as they do my ideology.”

But it is the reference to Hitler’s Germany that is likely to turn heads during Mr. Brat’s first full day as a tea party star.

And in a year when the Republican establishment was supposed to finally conquer its Tea Party wing, the upstarts wound up with perhaps the biggest victory of any primary season.

David Wasserman, a House political analyst at the nonpartisan Cook Political Report, said another, more local factor has to be acknowledged: Mr. Cantor, who dreamed of becoming the first Jewish speaker of the House, was culturally out of step with a redrawn district that was more rural, more gun-oriented and more conservative.

“Part of this plays into his religion,” Mr. Wasserman said. “You can’t ignore the elephant in the room.”

“We’re all processing it,” said Matt Brooks, the president of the Republican Jewish Coalition. “He was an invaluable leader, he was so integral to the promotion of, to congressional support of the pro-Israel agenda. It is a colossal defeat not just for Republicans but for the entire Jewish community.”

Cantor’s Jewish involvement deepened as his days grew busier. Raised in a Conservative Jewish home, he started to keep kosher and take private classes with Orthodox rabbis. His three children with wife Diana, whom he met at Columbia University, were active in Jewish youth movements.

Confidants say his commitment to Israel intensified after a cousin, Daniel Cantor Wulz, was killed in a 2006 suicide bombing in Tel Aviv.

For Jewish leaders, Cantor was a critical address within the Republican Party for the Jewish community’s domestic agenda, said William Daroff, the Washington director of the Jewish Federations of North America.

“When there was a need for a heavy lift for much of our Jewish federation agenda, we could count on being able to call Eric and have him help us get to the finish line,” Daroff said.

Steve Rabinowitz, a publicist who represents Jewish groups as well as liberal and Democratic causes, said he was conflicted about Cantor’s departure. On the one hand, he couldn’t help but be amused that Cantor’s flirtation with the Tea Party came back to haunt him. On the other, Rabinowitz suggested that Cantor’s defeat was a minus for the Jewish community.

“Wearing my mainstream Jewish skullcap, it’s clear the community needs people like Eric Cantor,” Rabinowitz said. “This is a loss for the Jewish community. I have my disagreements with him, but he’s been there for the community.”

Over the course of his 14 years in Washington, Cantor never ignored that elephant—and often tried to exploit it. This was most evident when it came to fundraising, which was the foundation of the Cantor political operation.

Beyond fundraising, Cantor’s religion gave him that thing his fellow Republicans so often lack and desperately covet: a diversity chit. He’s the only Jewish Republican in Congress—“I make the Jewish Caucus in the House bipartisan every time I go in,” he likes to joke—and his quest to become speaker of the House was made to seem a little less grubby and sweaty by the fact that he was seeking to make history by becoming the first Jewish speaker.

None of this is to say that Cantor’s religion hasn’t caused him difficulties over the years. There was always something uncomfortable about hearing Cantor’s Republicans colleagues attribute his fundraising success to his Judaism. And their portrayals of Cantor as an awkward grind—as someone who was no fun to be around—carried a whiff of cultural stereotyping. I remember wincing when one of them told me a story of being nonplussed at encountering an anxious Cantor not long after he joined the House GOP leadership: “I was like, ‘Dude, you just got appointed chief deputy whip and made it onto the Ways and Means Committee. It’s Hanukkah every day for you!’”

A number of his allies and aides had told me that one of the reasons they believed Cantor was so despised on the left was because of his religion—and the expectation that, as a Jew, he should be a Democrat. When I asked Cantor during one of our interviews in his Capitol office if he agreed with that theory, there was a long, painful pause. “I don’t, I can’t imagine that,” he finally said, “but it could be.” He went on to recall the criticism he received from some Jewish groups for meeting privately with Benjamin Netanyahu after the 2010 midterms—“I remember they laid into me, in a way, accusing me of things as a Jew, which I couldn’t even imagine”—and how any time there was a sign about Hitler or the Holocaust at a Tea Party rally, he was asked about it by the press.

“I think the party is definitely going to be losing one of its top two fundraisers in the House,” said Jeff Burton, a consultant and lobbyist who previously led the National Republican Congressional Committee’s Young Guns program founded by Cantor.

Aside from Boehner, Burton said, no other member of Congress in the Republican Party comes to close to Cantor in terms of being a cash magnet and a fundraising draw.

“You’re entertaining donors that expect to be treated like royalty,” said Nick Nyhart, president of the group Public Campaign — a watchdog organization that advocates for publicly financed campaigns. “It’s another symbol that the big money fundraising system creates an out of touch Congress.”

“He’s a public official in an overtly non-Jewish world,” said Rabbi Gary S. Creditor of Temple Beth El in Richmond, which Mr. Cantor attended as a boy. “He didn’t flaunt being a Jew, and he did not highlight it, but he did not deny it, either.”

Now Mr. Cantor’s stunning primary loss on Tuesday — to a little-known economics professor, David Brat, who called his election “a miracle from God” — has raised questions about whether anti-Semitism was at work.

There were hints of anti-Semitism when Mr. Cantor first ran for the House in 2000 — a “whisper campaign,” Ms. Hoffman reported, portraying his opponent as “the only Christian” in the race. But there was nothing of that sort this time, said Richard Grossman, a Jewish lobbyist in Richmond and a Cantor supporter. “If there was an undertone or a hidden message somewhere, the Jewish community would have reacted,” he said, “and I would say our history has been that we may overreact.”

Nancy Belleman, who is active in Jewish affairs in Richmond, said she viewed Mr. Cantor with a mix of “pride and disappointment.” She said she and some other Jewish Democrats had long wished that Mr. Cantor would be voted out of office. Of Mr. Brat’s victory, she said, “It goes under the banner of, ‘Be careful what you wish for.’ ”

Whenever Eric Cantor is in a room with fellow Jews, the Republican often is the odd political-man out. But the shocking defeat of the highest-ranking Jewish member of the House had Jews across the political spectrum nursing some tribal pride on Wednesday.

Much of Cantor’s conservative domestic politics are anathema to Jews, 7o percent of whom say they are Democrats or lean that way. But he played a unique role by advocating in the areas where many Jews are more conservative, particularly around the security of Israel and in public support for Jewish institutions.

“The partisan in me can’t help but be amused,” said Steve Rabinowitz, a Democratic media strategist who worked in Bill Clinton’s White House and now serves many Jewish organizations. “But the Jewish communal professional in me thinks it’s not a good thing for the community.”

To many liberal, secular Jews, Cantor’s support for things like expanded public funding to religious institutions “is problematic,” Diament said.

“But from our perspective, we’re losing a real partner and real champion.”

The jew cries out in pain as he strikes you.

The reverberations triggered by Cantor’s unprecedented ouster reflect the thoroughly judaized nature of the current regime. The proverbial elephant in the room is the unrivalled power and influence of the jews – a group who, left or right, religious or secular, see themselves first and foremost as jews.

The standard left-vs-right partisan paradigm fails miserably to explain what’s happening here. Left and right against the tea party gets closer to the truth. Both lobes of the jew-led plutocratic media-financial-political complex are waging a genocidal war by mass immigration on a White population which is hopelessly divided, demoralized, in denial and in disarray.