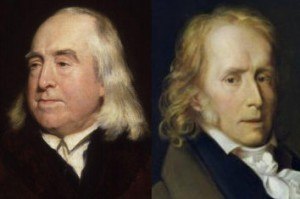 Getting now to the meat of what Yockey had to say about liberalism.

This branding of things as irrational is in fact correct. Rationalism must mechanize everything, and whatever cannot be mechanized is of necessity irrational. Thus the entirety of History becomes irrational: its chronicles, its processes, its secret force, Destiny. Rationalism itself, as a by-product of a certain stage in the development of a High Culture, is also irrational. Why Rationalism follows one spiritual phase, why it exercises its brief sway, why it vanishes once more into religion — these questions are historical, thus irrational.

Liberalism is Rationalism in politics. It rejects the State as an organism, and can only see it as the result of a contract between individuals. The purpose of Life has nothing to do with States, for they have no independent existence. Thus the “happiness” of “the individual” becomes the purpose of Life. Bentham made this as coarse as it could be made in collectivizing it into “the greatest happiness of the greatest number.” If herding-animals could talk, they would use this slogan against the wolves. To most humans, who are the mere material of History, and not actors in it, “happiness” means economic wellbeing. Reason is quantitative, not qualitative, and thus makes the average man into “Man.” “Man” is a thing of food, clothing, shelter, social and family life, and leisure. Politics sometimes demands sacrifice of life for invisible things. This is against “happiness,” and must not be. Economics, however, is not against “happiness,” but is almost co-extensive with it. Religion and Church wish to interpret the whole of Life on the basis of invisible things, and so militate against “happiness.” Social ethics, on the other hand, secure economic order, thus promote “happiness. “

This calls to mind Thomas Jefferson’s invokation of “pursuit of happiness”.

From the Internet Encyclopedia of Philosophy page on Jeremy Bentham:

Jeremy Bentham was an English philosopher and political radical. He is primarily known today for his moral philosophy, especially his principle of utilitarianism, which evaluates actions based upon their consequences. The relevant consequences, in particular, are the overall happiness created for everyone affected by the action. Influenced by many enlightenment thinkers, especially empiricists such as John Locke and David Hume, Bentham developed an ethical theory grounded in a largely empiricist account of human nature. He famously held a hedonistic account of both motivation and value according to which what is fundamentally valuable and what ultimately motivates us is pleasure and pain. Happiness, according to Bentham, is thus a matter of experiencing pleasure and lack of pain.

Bentham saw happiness in terms of pleasure and pain, not “economic wellbeing”. Back to Yockey:

Here Liberalism found its two poles of thought: economics and ethics. They correspond to individual and humanity. The ethics of course is purely social, materialistic; if older ethics is

retained, its former metaphysical foundation is forgotten, and it is promulgated as a social, and not a religious, imperative. Ethics is necessary to maintain the order necessary as a framework for economic activity. Within that framework, however, “the individual” must be “free.” This is the great cry of Liberalism, “freedom.” Man is only himself, and is not tied to anything except by choice. Thus “society” is the “free” association of men and groups. The State, however, is un-freedom, compulsion, violence. The Church is spiritual un-freedom.

All things in the political domain were transvalued by Liberalism. War was transformed into either competition, seen from the economic pole, or ideological difference, seen from the ethical pole. Instead of the mystical rhythmical alternation of war and peace, it sees only the perpetual concurrence of competition or ideological contrast, which in no case becomes hostile or bloody. The State becomes society or humanity on the ethical side, a production and trade system on the economic side. The will to accomplish a political aim is transformed into the making of a program of “social ideals” on the ethical side, of calculation on the economic side. Power becomes propaganda, ethically speaking, and regulation, economically speaking.

The more important polar opposites Yockey is trying to distinguish here are Liberalism and Authority.

The purest expression of the doctrine of Liberalism was probably that of Benjamin Constant. In 1814 he set forth his views on the “progress” of “man.” He looked upon the 18th century Enlightenment with its intellectualistic-humanitarian cast as merely preliminary to the true liberation, that of the 19th century. Economics, industrialism, and technics represented the means of “freedom.” Rationalism was the natural ally of this trend. Feudalism, Reaction, War, Violence, State, Politics, Authority — all were overcome by the new idea, supplanted by Reason, Economics, Freedom, Progress and Parliamentarism.

War, being violent and brutal, was unreasonable, and is replaced by Trade, which is intelligent and civilized. War is condemned from every standpoint: economically it is a loss even to the victor. The new war technics — artillery — made personal heroism senseless, and thus the charm and glory of war departed with its economic usefulness. In earlier times, war-peoples had subjugated trading-peoples, but no longer. Now trading-peoples step out as the masters of the earth.

Wikipedia’s page on Benjamin Constant gives us some idea why Yockey regarded him as the “purest expression” of liberalism:

One of the first thinkers to go by the name of Liberal, Constant looked to Britain rather than to ancient Rome for a practical model of freedom in a large, commercial society. He drew a distinction between the “Liberty of the Ancients” and the “Liberty of the Moderns”.[10] The Liberty of the Ancients was a participatory, republican liberty, which gave the citizens the right to directly influence politics through debates and votes in the public assembly.[10] In order to support this degree of participation, citizenship was a burdensome moral obligation requiring a considerable investment of time and energy. Generally, this required a sub-society of slaves to do much of the productive work, leaving the citizens free to deliberate on public affairs. Ancient Liberty was also limited to relatively small and homogenous societies, in which the people could be conveniently gathered together in one place to transact public affairs.[10]

The Liberty of the Moderns, in contrast, was based on the possession of civil liberties, the rule of law, and freedom from excessive state interference. Direct participation would be limited: a necessary consequence of the size of modern states, and also the inevitable result of having created a commercial society in which there are no slaves but almost everybody must earn a living through work. Instead, the voters would elect representatives, who would deliberate in Parliament on behalf of the people and would save citizens from the necessity of daily political involvement.[10]

Henri-Benjamin Constant was born in Lausanne to descendants of Huguenot Protestants who had fled from Artois to Switzerland during the Huguenot Wars in the 16th century.

The Huguenot Connection, at Jewish Ideas Daily, notes how Huguenots hid jews during World War II, and refers to “a long history of Huguenot affinity with the Jews, traceable to the origins of French Protestantism and ultimately to the biblically rooted theology of John Calvin, the “father” of Reform Protestantism”, and “the lasting Huguenot sympathy for the Jewish people”. The sidebar contains a link to another article, The Huguenots, the Jews, and Me, subtitled “A tale of French philo-Semitism”:

Although my language and culture are French, I often feel more comfortable—morally and intellectually—in Israel than I do in my own country.

Yet I do not (as far as I know) have a single drop of Jewish blood in my veins. Neither did I, nor any member of my family, convert to Judaism. But philo-Semitism, which often includes an emotional identification with the Jewish people, is part of the heritage of the community I was raised in: The French Huguenots, or Protestants.

“We are not many. But we French Huguenots . . . who know our own history are linked with the Jewish people by too many bonds of culture, history, and religious beliefs to betray that old alliance.”

The Huguenots and the Jews Entwined in the pathways of History indicates that the roots of this affinity are, at least in part, biological, owing to a substantial number of “conversions” by jews.