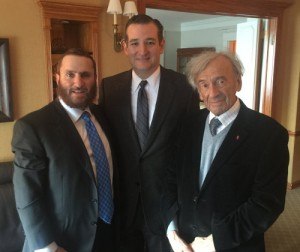 The article emphasizes the bipartisan mix of jews and their overarching concern for Israel.

Mr. Boteach said, “You are arguably the strongest US Senator when it comes to Israel. But if you run, can you win? You’re seen as a champion of the tea party. And the media tends to caricature.”

Mr. Cruz replied, “Historically, the media has had two caricatures of Republicans. We are either stupid or evil.”

“Sometimes both!” volunteered one of the lunchers.

Mr. Cruz laughed and continued. “Reagan was stupid, according to the media. George W. Bush, Dan Quayle, stupid. Nixon was evil, Cheney was evil. I sort of take it as a backhanded compliment that they’ve invented a new caricature for me – crazy.

The jewsmedia does indeed caricature Whites, pathologizing and demonizing even the mildest, most unconscious expression of White racial interests, like the tea party, as stupid/crazy/evil. Knowing this, Cruz went straight to the belly of the beast, the New York kehillah, to explain his plan to become president. Part one is to get jewish money and media backing by professing how ardently he identifies with them and their exclusive ethnostate. Part two is the brown masses, the “hispanics”, who he argues are already in his pocket out of quasi-racial solidarity. Part three is a phony rhetorical appeal aimed at cutting into Hillary’s White base. White conservative and tea party support is taken for granted.

A video of Cruz performing his “blue-collar” “working-class” shtick for all these slimy “heavy macher” “power jews” would be pure gold, and potentially sink Cruz. Of course, as with Mitt Romney’s “entitlement” scandal, if such a video did surface, and some kind of scandal erupted, the jewsmedia would “blur out” the jewy essence of the political schmoozing and transform it into a reason to whine about “anti-semitism” at the same time.