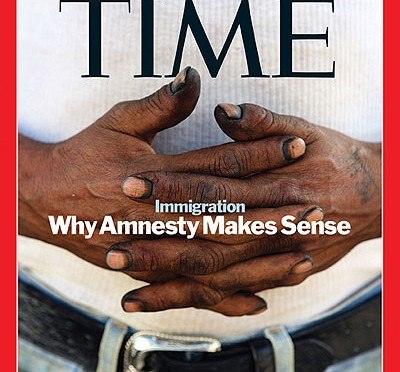 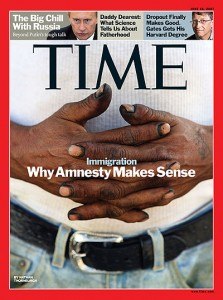 The MSM can’t help but report on the downfall of their maverick hero John McCain. After all, they’ve cheered him on all these years. Now that his campaign has gone kablooey they have a duty to explain why.

Despite the titles of their articles, which promise to unveil the secrets behind the McCain campaign’s “meltdown” and “chaos”, all you’ll find is whitewash. What virtually all the major media stories about McCain have in common is the way they tiptoe around immigration. They minimize McCain’s unbridled support for immigration, and they minimize how this might be connected to his fall in popularity. First and foremost they mention his position on Iraq, his “maverick” status, his temper – none of which is news. Then they focus on his finance problems and staff changes. Symptoms, not causes. Buried somewhere near the end they might mention immigration. In an oblique “who knows, this might have something to do with it too” sorta way.

Very odd isn’t it? McCain’s stand in favor of shamnesty and the citizenry’s overwhelmingly opposition to it both come into crystal clear focus just as he morphed from favored front-runner into bankrupt has-been. But for the open border pundits at Time, Newsweek, the Wall Street Journal, the New York Times, and Fox News the clear link isn’t notable, it is in fact hardly mentionable.

Observe the news carefully, from any mainstream source including Fox, and you can see clear signs of their immigration agenda. There is, for example, a never-ending flow of sob stories and sympathy plays, salted with the occasional hypocritical name calling by ethnocentrists and factually wrong wishful thinking.

We are constantly informed of the terrible conditions the immigrants are fleeing and the terrible suffering that enforcing our laws causes immigrants and their families. We hear repeated assertions that the opponents of immigration are a loud-mouthed minority who want to ship all the undocumented people off to concentration camps.

For more than a year now I’ve scrutinized the mainstream media for intelligent immigration debate. There isn’t any. From the Beltway Boys, to O’Reilly vs Geraldo, to NRO vs the WSJ, the discussion is dominated by open border advocates of various stripes who never acknowledge the costs of immigration and quickly dismiss any suggestion to stop or reduce it as unthinkable or impossible.

Likewise with our pols. The Grand Bargain, negotiated in secret, turned out to be ridiculously lopsided. Even as the public rejected it the Grand Bargainers pulled every trick they knew to limit debate and speed it down our throats.

So far the Republican presidential debates have hardly touched immigration, and the Democrat candidates unanimously favor immigration and so don’t discuss it at all. In the past months we’ve been informed by one pundit after another that it was absolutely critical to do something about immigration, but that if the Grand Bargain failed we wouldn’t be able to discuss immigration again until after the next presidential election.

Huh? This is how our media and politicians serve voter interests? The Senate phone system was so overloaded it crashed. How many times has that happened before? By all accounts both sides are intensely interested in debate. Let’s have it. Why shouldn’t the 2008 presidential election be a referendum on immigration? Why shouldn’t we talk about every aspect of immigration from now until 2009?

The main reason is that those who favor immigration know they would lose any honest, factual debate. They have until now provided nothing but irrational arguments based on emotion. Their advocacy for Ladeeenyo interests would be called bigotry if it were instead biased in favor of Americans, and their fervent desires to “diversify” America would be called genocidal if it were perpetrated on any other population.

The media does in fact provide plenty of information about the terrible consequences of immigration for Americans. They mix it in the daily firehose of facts and events, deliberately confusing the perfectly avoidable human disasters with unavoidable acts of nature. Their narrative consistently blames Americans for what are in fact the side effects of immigration. We use too much energy. We’re destroying our environment. Schools are failing. Crime and poverty are rising. Bad Americans. Shame on you.

An open and honest debate will reveal our media’s lies. We will see immigration’s contribution to virtually every problem our society suffers. You can see it now. Just open your eyes.

“Certainly not every community nationwide is seeing an increase in foreclosures, but foreclosed properties are becoming more commonplace and adding to the downward pressure on home prices in many areas.”

As with most stories covering the mortgage crisis there is no attempt to examine the possible causes. Just a pile of facts.

The default rates in the subprime segment of the U.S. mortgage market, which caters to borrowers with poor credit histories, have jumped in recent months as the housing industry has slowed and prices have fallen.

In English: the problem originates in the risky, low end of the market, i.e. mostly poor overextended borrowers.

California documented one foreclosure filing for every 308 households, which as more than twice the the national average.

Florida, Ohio, Arizona, Georgia, Michigan, Indiana and Connecticut were some of the other states with foreclosures rates ranking among the nation’s 10 highest in May.

Furious rates of home building and moving are signs of a booming economy, aren’t they? Well wouldn’t that depend on how much arises from white flight? One of the biggest reasons we supposedly need a constant influx of cheap unskilled labor is for construction, particularly home construction. It’s a circular argument. What fraction of our economy is simply the churn created by immigration?

America has all sorts of problems whose root cause is too many people: jail crowding, teacher shortages, police shortages, traffic congestion, hospital closings, et cetera, ad nauseum. Virtually none of the articles you’ll find in these news searches ever mentions how these problems are caused or exacerbated by permitting millions of indigent uneducated immigrants to flood into this country every year.

One very predictable consequence of all the crowding and poverty is strife.

Violent Crime Blazing Back in America

James Fox, a professor at Northeastern University, said part of the problem is that “gangs have made a comeback, and they are particularly well organized.”

Are the Lords of Flatbush back? Well no, the professor is probably talking about MS-13 and the Mexican Mafia. Conveniently the article doesn’t say.

“For years it has been very frustrating for those citizens and to the police when you hear all the press and media relations saying things are better, things are safer, and yet you have citizens still afraid to go to the grocery store,” Officer Kristopher Baumann, chairman of the Fraternal Order of the D.C. Police Labor Committee, told ABC News.

The new crime figures come as “no surprise to police on the beat or to citizens in dangerous neighborhoods,” Baumann said.

Attorney General Gonzales said there is only so much the federal government can do in fighting crime.

“We know that community-specific problems cannot successfully be tackled nationally,” he said, “because crime issues vary from city to city, and even between neighborhoods in a single city.”

We might try building the fence and deporting the criminals. It wouldn’t be community-specific, but it would probably be pretty effective. Who can tell, the article doesn’t really say the rise in violence has anything to do with immigration, so maybe it’s just the xenophobe in me that imagines these things.

See how wonderful immigration is? The luckiest of us get to move to “nice places” with “good schools” and “friendly people”. Aren’t we privileged? What happened to the old neighborhood? Don’t ask.

UPDATE 21 Jul 2007: Not every news source is coy about immigration. Here’s something to think about the next time the media lays on a guilt-trip about America’s broken health care system:

“We have a terrible, absolutely vicious, law called EMTALA: the Emergency Medical Treatment and Active Labor Act, which is really the culprit that requires every emergency room, and every physician of an emergency room, to treat illegal aliens for free,” she said.

Cosman said 84 hospitals in California have been forced to close because of the high cost of treating illegal aliens with only 50 percent of all treatments reimbursed by government.

“Even physicians in those emergency rooms don’t fully get the point that by being compassionate, and generous, and gracious, they are, in essence, destroying their own livelihoods as well as their own hospitals,” she said.

While politicians often mention there are 43 million without health insurance in this country, Cosman’s report estimates that at least 25 percent of those are illegal immigrants. The figure could be as high as 50 percent.

Not being insured does not mean they don’t get medical care.

Keep this in mind if you’re unfortunate enough to see Michael Moore’s “funniest movie yet”, his crockumentary Sicko.

Free heath care? The illegals call their system No Hablo. Guess who pays the bills?

4 thoughts on “It’s the Invasion Stupid”