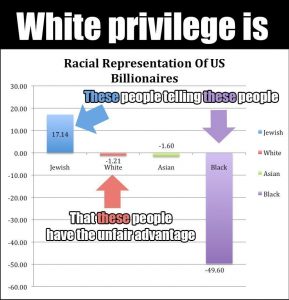 Eric Weinstein, who organized and gave the Intellectual Dark Web cabal its name, and who, like his brother Bret, has generally tried to downplay his jewy identity, had an epic meltdown over #jewishprivilege trending on Twitter.

This is noteworthy because Weinstein and his cabal have for several years made a point of publicly posturing as if they oppose “identity politics” and “tribalism”, supposedly because they regard these things as a violation of their “liberal” principles. Yet the inclusion of full-time full-throated jew-firster Ben Shapiro in the IDW made it clear from the beginning that their “liberalism”, like all “liberalism”, is just a swindle, an indirect way for jews to advance their collective interests while advising Whites to abandon ours.

Shapiro has always been the most flamboyantly out jew most directly connected to the cabal, but IDW-orbiting jewess Bari Weiss is comparable. Most of the rest of the cabal has instead followed the lead of the Weinstein brothers, mostly leaving the “as a jew” part out of their (public) moralizing. It is there, burning furiously, driving their words and deeds. They just pretend it isn’t.

I first noticed Weinstein beginning to crack and reveal the significance of his inner jew in February 2019, when kinda-sorta down-low fellow tribemate Glenn Greenwald called Dave Rubin in particular and the IDW in general “self-serving, tribalistic frauds”. This prompted Weinstein to respond with an odd ramble he titled Glenn Greenwald, @IlhanMN, the Rosenbergs, Anti-semitism, Progressives, Silence, Speech and the IDW: a thread. His key point: “I’m pretty sure we are moving to normalize anti-semitism through clear support for BDS in the Democratic Party”.

In this Weinstein revealed that he is animated by the same consciously jewy concerns as any other jew. They just disagree over how the current two-party system, which is effectively controlled by jews, might better serve their tribe. The more blatant and thorough-going jew control gets, the more shrilly jews screech as if uppity goyim are the real problem. Though many jews pretend that being a jew has nothing to do with their politics, they give the game away when they start screeching about “anti-semitism”. The “liberal” mild-mannered Clark Kent jew suddenly transforms into Superjew, the messiah swooping in to fight for his tribe.

Anyway, I’ve previously noted that Weinstein’s older, more subtle form of “liberal” jewing led directly to the newer, more explicitly anti-White BLM/”wokeness” form of jewing. Many jews are already on board with the new program, but a substantial subset are like Weinstein – deeply, deeply concerned that the non-White goyim waging open war on the White goyim might not be the best thing for the jews right now.

Bret Weinstein expressed his concerns along these lines in June 2017, and that led to the formation of the IDW cabal. Bret has always been painfully careful in choosing his words, and became even more so over time. His brother Eric is much less reserved. Like so many other jews, Eric Weinstein was pushed over the edge by uppity goyim talking about jew privilege on his internet. He literally began his rant with MUH HOLOCAUST:

My #JewishPrivilege: I’ve never spent a night hungry. There was always a roof over our heads. Never went to jail or onto food stamps. First cousin froze to death escaping Babi Yar. Attended the top school in Los Angeles. My cousins Eva & Miriam Kor were a Mengle Twin experiment.

Weinstein made several more posts in this vein, making it very clear that he equates being a jew with being a victim, with being oppressed. What’s more, he conveys this view in a deeply personal way, recounting a string of stories he and his extended family have been stewing over and passing along for generations. He specifically cites supposed oppression of his family by Russians, Germans, and Americans. He airs his hostility shamelessly, revealing not just his own tribalist mentality, but his understanding that this hostile attitude is shared and regarded as perfectly normal by his brother, his family, and his tribe.

The outburst gets really eye-opening when he tries to jewsplain that jews like himself support BLM/”wokeness” to the extent it is anti-White, but oppose it splashing over onto the jew ethnostate:

So, if you want to know where this cashes out: We have *finally* become mildly well to do. Precarious, but more fortunate than many.

The word “Privilege” makes me laugh however. Every person who has Jews they know and love, knows the truth: we are always simply between pogroms.

Anyone who refers to Jews as having “White Privilege” as in “above the real problems” is either:

Yes, some of us are now doing ok.

Yet it’s never for long.

And this is why so many of us Left leaning Jews are so confused by our black brothers and sisters. We see your pain. We see the invisible bigotry against you. We saw the FBI’s war on your community. We fought along side you based on your reasoned grievances. For almost 100 years.

But as you see we are open that things have gotten much better for us. As they have for you. Yes 1865 is more recent than others imagine. So is 1945. Yes lynchings are horrific. So are pogroms. You face structural oppression. So do we. Your pain is invisible to many. Ours too.

Cards on the table: I‘m in awe of Black *achievement* and am shocked by desires to tell others like us that we‘re all fine because we are pink and may finally have 2 sheckles to rub together. Our two communities don’t belong in the oppression Olympics. We‘re both superachievers.

Why do I oppose #BlackLivesMatter when I am committed to Black Lives Mattering and an end to structural oppression? Because you can’t call a community more vulnerable than even Blacks “genocidal” in your platform. Israel has issues, but “genocide” is like modern blood libel.

So let’s cut the crap. We have a deeply flawed country to fix & you can count on my support. But it isn’t as bad as it once was for Blacks or Jews & money doesn’t do as much as folks think in the face of murderous rage. Let’s all ease up on “Privilege” as a way of avoiding this.

This is so much solid gold that it makes me wonder if he’s trolling. I don’t follow him closely, but I don’t think so. I’m pretty sure he’s completely serious.

“we are always simply between pogroms” (t.jew)

“our black brothers and sisters . . . We fought along side you” (against Whites)

“Yes 1865 is more recent than others imagine. So is 1945. Yes lynchings are horrific. So are pogroms. You face structural oppression. So do we. Your pain is invisible to many. Ours too.” (“hello my fellow victims of Whites”)

Weinstein is making a tribalist appeal. He’s not arguing as an individual, as a “liberal”, or even as a leader of the IDW cabal. He’s speaking to blacks as a member of The Tribe. He’s saying that blacks who mistake jews for Whites are A) stupid, B) stupid, or C) crazy. He sees blacks and jews as more similar, and thus as natural allies against Whites.

Myron Wallik may have been better known, but Weinstein’s mask drop is more comprehensive.

Israel has issues, but “genocide” is like modern blood libel.

There’s the rub. First, you can see that jews regard their own oppression narrative as a weapon in the way they sneer and hiss when it’s aimed at themselves. Second, to jews the black goyim are still just goyim, and though most jews wouldn’t spell it out as clearly as Weinstein does, they all think the goyim must never forget that jews make the rules.