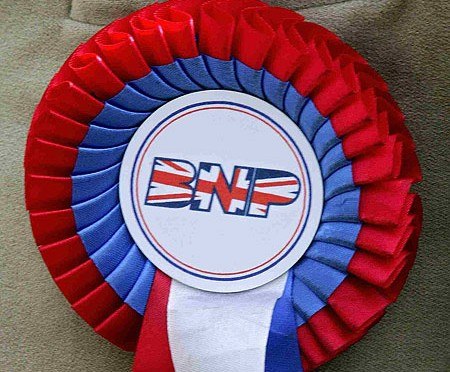 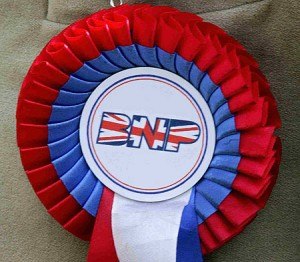 Just in advance of election day in Britain both the political and media wings of the anti-White regime have pulled out all the stops in their reality-inverting propaganda. Discarding their masks as sober statesmen and unbiased journalists, as well as their usual lip-service in support of democracy, they are shamelessly, hypocritically resorting to the most extreme and prejudicial language to gin up fear and loathing against those they accuse and condemn for doing the same.

They’re projecting their own guilty minds of course. The difference between the BNP and the anti-White bastards in control is that the BNP don’t currently control anything. It is the anti-White anti-BNP forces who have made all the failing policies and who control and censor all the established megaphones with iron fist.

The thrust of the anti-BNP propaganda campaign is that voters should fear what the BNP might be and might do, even though much of the scare-mongering is fabricated from whole cloth. Repeated often enough they hope their snide smears will make White voters forget what they can see with their own eyes: the imported anti-White hate and violence wreaking havoc all around them, and the traitorous leaders who brought it, rejoice in it, and have themselves attacked native Britons in order to defend it.

If any part of what I’m writing seems like an exaggeration, review for yourself the media’s own product.

We love Britain precisely because of its tolerance and diversity. The British National party and its allies are a threat to everything that makes us proud of this country we love. The BNP is working hard to conceal its extremism because it knows that people in Britain totally reject the politics of racism and hatred.

This statement, signed by Prime Minister Gordon Brown, amounts to: “We love aliens more than we love native Britons, it is the aliens who make Britain great.” With native leaders like this, who needs alien enemies?

Fears have been raised that the far-right party could win seats on Hampshire and West Sussex county councils because voters have lost faith in mainstream parties.

Fears are being raised alright. By the media. Only in far-wacko minds is the simple act of voting your interests considered “far-right”.

In some of Manchester’s bleakest neighborhoods where unemployment is rife and anxiety about an immigration influx is palpable, one of Prime Minister Gordon Brown’s worst fears is unfolding before Thursday’s European Union elections.

The British National Party, which doesn’t allow nonwhites as members and is against membership in the European Union, is gaining ground in former Labour Party strongholds that once threw their support behind Brown and his predecessor, Tony Blair.

Most anti-BNP articles won’t even admit that reaction to the regime’s support for genocidal immigration is a well-spring of support for the BNP. This article does but inverts reality, painting opposition to genocide as “extremist”. The suggestion is that the BNP incites racial hatred, though the reality is that mass immigration bringing in other races is the more proximate cause.

Mr Miliband, whose Jewish father fled Belgium before the Nazi invasion, added: “This is the country that flew the flag of freedom against fascism in the 1940s.

“It will be a day of shame if we send fascists to the European Parliament.”

David Miliband has no ground on which to stand. He should be ashamed for trying to shame native Britons for voting their own interests in their own homeland. He should bugger off to Belgium, or better, to israel, if he doesn’t like that the British people today still wish to defend their homeland from being overrun by outsiders as their forefathers did. That was, after all what the Battle of Britain and the larger carnage of World War II was about, wasn’t it? Or was it all, then and now, really about doing what’s best for jews? Miliband’s idea of shame assumes the latter.

The extremist BNP are thick, as well as nasty, thugs.

Please don’t be conned into voting for this vile, racist, incompetent mob tomorrow.

This is a prime specimen of the kind of pure hypocrisy published by major media outlets. Though it is an opinion/editorial rather than “journalism”, it’s easy to see how the one colors the other. No major media outlet would publish a similarly worded piece about any other political party, never mind anything like the continuous stream of vile, nasty, thuggish “opinion” aimed at smearing the BNP.

As a Briton, enjoying our rich and diverse country. As a mother, wondering what future my children will grow up in.

And as a woman, because the BNP isn’t just a racist, homophobic, xenophobic party, it’s a sexist party too. Whatever they pretend, they just aren’t a normal party.

And don’t forget, they beat their spouses, molest children, lay about, and drink blood too! The media really knows no bounds when it comes to smearing anyone who stands up for White interests.

Even if any of the trash talk is true, the BNP’s saving grace is that they aren’t guilty of genocide. They don’t want Britain flooded with surly hostile aliens. They’re against that. So if it’s really all about your children then stopping the genocide should be your first priority. If you favor the aliens, well then be honest, for you it’s really all about their children, isn’t it?

A CONVICTED racist is boasting about his leading role in the British National Party’s campaign to win votes in this week’s European elections.

Roy West, from Dukinfield, pleaded guilty to racial harassment at Tameside Magistrates’ Court in February after telling his German next-door neighbour to ‘go back to Krautland and kill some more Jews.’

Astounding. The media normally (see Miliband’s comment above) see self-righteous speech that puts jews on a pedestal as virtuous, but here they’ve managed here to turn it into racist hate. It’s amazing to see the kind of contradictions created when all pretense at being consistent is discarded, except the rock solid consistent hatred for Whites standing up for their interests.

The BNP claims to have modernised, but its championing of British jobs for British people cannot hide its insistence that its members are white

Hide? The BNP is quite open about who they represent. You’ll find it in their Mission Statement:

The British National Party exists to secure a future for the indigenous peoples of these islands in the North Atlantic which have been our homeland for millennia.

We use the term indigenous to describe the people whose ancestors were the earliest settlers here after the last great Ice Age and which have been complemented by the historic migrations from mainland Europe.

It’s the first thing anyone who’s at all curious about the BNP find out. Logically a party so organized would restrict membership to the very people it purports to represent. It is not morally or ethically wrong, nor is it hidden.

Accusations otherwise are the projections of people who hide their hatred for Whites behind a false love of aliens.

Denial is opening the door to the extremists, Alice Miles, Times Online, 3 June 2009:

These were not skinhead thugs that I met on Monday. We should not stand, fingers in ears, pretending that such views do not exist on some of the ordinary housing estates of Britain.

Some anti-BNP articles are more subtle, being aimed at the regime’s thought-leaders rather than voters. This one admits the “hate” rhetoric isn’t working, arguing against pretense that it is, while pretending that the regime has simply not been listening. The reality is that the regime has been actively squelching and pathologizing any and all dissent to their genocidal policies on immigration and “diversity”.

The regime is far more likely to continue its denial, to the point of denying legitimacy to the BNP by outlawing opposition to immigration. To accept opposition to immigration would be a dangerous step toward admitting past wrong-doing. To do that, when the wrong-doing is genocide, would be suicidal, and the regime knows it. Those at the top are not in any way noble enough to stand down now.

The BNP was on course to win a seat in the North West, [Spokesman Simon Darby] said, and attract up to 12% of the vote in some regions.

Mr Darby said BNP candidates attracted unparalleled hostility from the media, campaigners, celebrities and other political parties – who accuse it of being racist and divisive – but said the election of a BNP MEP would “change the rules of the game”.

Native Britons on the fence should clearly see who their enemy is by comparing the hysterical anti-BNP smears and slander passed off by the media as news and opinon with the language used and positions taken by The British National Party itself.

Here are the anti-BNP headlines above gathered together to better illustrate the poison the media is trying to place in every readers’ mind:

Go to the polls to fight BNP hate
Voters urged not to support BNP in poll
Europe braces for extremist gains in elections
Shameful day if BNP wins seat, says David Miliband
Why you should not vote for the BNP
BNP bigots are racist AND sexist
Racist campaigning for BNP
How BNP tries to hide its racist core
Denial is opening the door to the extremists

48 thoughts on “The Surreality of Anti-BNP Propaganda”