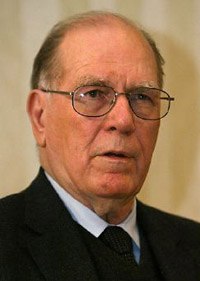 By way of preface I’ll admit that like other deracinated, mainstream White Americans, most everything I have ever read or heard about Lyndon LaRouche has come from people, mainly via TV or in print news, who don’t like him and take for granted that everyone should think LaRouche and the people who agree with him are insane clowns, fools, morons, losers, etc. I don’t remember any specific reasons being offered to justify this attitude, but not wanting to waste time understanding something marginal and not wanting to be considered insane was enough reason for me, until recently, to simply ignore him.

Relatively late in life however I’ve come to understand that, at least some of the time, certain people get heaped with opprobrium not because what they’re saying is wrong or insane, but because they pose a threat to people who have power. Incorrect, insane things can be said, even things that pose a threat, as long as they’re said about powerless people.

I only recently stumbled on this book about LaRouche. Once again the view is hostile, in fact extremely hostile, but unlike the vague smears I’ve encountered in the past this author explicitly details just what it is about LaRouche that he sees as a threat.

Lyndon LaRouche and the New American Fascism, by William Dennis King, published in 1989. The excerpts below are taken from the Revised online HTML edition, 2007. OCR errors have been left intact. Emphasis added.

Taken off Kings website, this is the most substantial mainstream book on the LaRouche movement. Has a definite anti-Larouche bias

From the beginning King makes it clear that he considers LaRouche not a “kook” to be dismissed but a serious threat, and refers frankly to the mechanisms by which such threats are usually contained.

Why did society’s containment system miss this “problem-case”? How did LaRouche break out of quarantine? Did powerful people know all along who and what he was, deciding simply to use him for their own purposes? Why did he remain invulnerable to prosecution for so many years? How did he inspire so much fear in those who should have led an early fight to drive him back into quarantine?

LaRouche apparently opposes “the oligarchy”, but that’s not who he really threatens.

The lynchpin of LaRouchism, as of more primitive systems of paranoia, is the fear and hatred of an evil and secretive force. Although LaRouche calls this force the oligarchy, he really means the Jews. Given the total paranoia of the system, the fear and hatred veers into neo-Nazism.

The latter is not an acceptable ideology in today’s America and so must remain partially disguised to evade the “donkey censor.” LaRouche’s conspiracy theory therefore becomes a double system: First, it extends the NCLC’s paranoia and hatred into every aspect of thought; second, it attacks the supposed forces of evil in a euphemistic manner. This dual nature of the theory should be kept in mind as we step by step “decode” the bizarre formulations in which it is couched.

If LaRouche had been a traditional anti-Semite, he might have based his conspiracy theory on the Protocols of the Elders ofZion, the infamous forgery that purports to document a nineteenth-century conspiracy to establish a Jewish world government through various diabolical intrigues. But the Protocols is too narrow in scope for the purposes of total paranoia and also is too thoroughly discredited by scholars for practical use among most educated people. LaRouche hesitated, however, to reject out of hand one of the most effective Big Lies of the first half of the twentieth century. So he compromised: The Protocols, he said, has a “hard kernel of truth” but is only of limited significance-it represents only a small piece of the real conspiracy of the “oligarchy.”

LaRouche’s oligarchy makes the Elders of Zion seem mild. It supposedly has dominated the world for tens of thousands of years with unremittingly evil motives. Indeed, LaRouche accuses it of periodically killing off a large portion of the human race through famines and plagues. Today it is supposedly plotting a New Dark Ages, which will include nuclear holocaust, the massive spread of AIDS, Zero Growth, and total bestial heteronomy.

“The Secrets Known Only to the Inner Elites” is LaRouche’s most thorough account of his version of world history. Apart from his schema of oligarchs versus humanists, this work and other NCLC pseudo-historical treatises appear to borrow heavily from the anti-Semitic “classics”: Houston Stewart Chamberlain’s Foundations of the Nineteenth Century {^ 899), Oswald Spengler’s Decline of the l/Vesf (1918-22), Hitler’s Mein Kampf {^ 925-26), Alfred Rosenberg’s Myth of the Twentieth Century {^930), and Francis Parker Yockey’s Imperium (1948), as well as assorted British and American Nazi tracts from the interwar years.

LaRouche’s attacks on the evil “Babylonians,” for instance, strongly resemble theories found in Chamberlain, who claimed that the Jews of the Babylonian Captivity rose to great influence over their captors, and that Babylon rather than Jerusalem was the real headquarters of the ancient Jews. Chamberlain even remarked on the “Rothschilds” of Babylon. This theory is popularized for American white supremacists in pamphlets sold by the Louisiana-based Sons of Liberty~for instance. The l/lerchants of Babylon by Rev. Bertrand L. Comparet, which features a photograph of four bearded rabbis on the cover. When LaRouche denounces the “Whore of Babylon,” the Ku Klux Klan knows exactly what he means.

King sure knows exactly what he means.

It can be said that LaRouche’s version of history not only begins with Nazi and proto-Nazi ideas (the Atlanteans from the North) but ends with them. His theory of the contemporary struggle between parasitic bankers and productive factory owners is suspiciously similar to the views of Hitler’s early economics adviser, Gottfried Feder. The latter likewise urged the crushing and expropriation of speculative capital on behalf of industrial capital. Oswald Spengler, in a somewhat different version, hailed the “mighty contest between the two handfuls of steel-hard men of race and of immense intellect-which the simple citizen neither observes nor comprehends.” Like LaRouche, SpengJer claimed that the “battle of mere interests” between capitalists and workers is insignificant in comparison.

With all the above, it is still a long step to the conclusion that LaRouche’s historical writings are genuine neo-Nazism. He does discuss the “British” as the racial enemy of humanity that must be crushed, destroyed, eliminated. But is he clearly referring to the Jews when he uses the word “British”?

When LaRouche says the Queen of England pushes drugs or that Britain is the chief enemy of the United States, he is not merely indulging in eccentricity or a Freudian dislike of female authority figures. These statements have a serious meaning to anti-Semites and neo-Nazis in West Germany and the United States. They are eccentric only to those who have not studied the history of modern anti- Semitism, in which the theme of Jewish-British race mixing and Jewish domination of the British Empire looms large.

The original Nazis popularized this theory. In Mein Kampf, Hitler complained that the Jews in England exert an “almost unlimited dictatorship” through their manipulation of public opinion. Heinrich Himmler speculated in his unpublished notebooks on the “Jewish blood” of the English and Scots. Alfred Rosenberg’s Myth of the Twentieth Cen^L/ry discussed the alleged identity of the policies of “Jewish high finance” with those of Great Britain and claimed that the British government had “handed over control of all financial transactions to Jewish bankers such as Rothschild, Montague, Cassell, Lazard, etc.” Expressing a theory that the LaRouchians later would repeat in Dope, Inc., Rosenberg said that England had “allowed the opium trade to fall increasingly into Jewish hands.”

Once Nazi Germany and Britain were at war, the Nazis developed a more exaggerated version. World-Battle, an official propaganda organ, depicted “English high finance” as Judaism incarnate. England’s aggression against innocent Germany, it said, was the result of the Jews buying Churchill with piles of gold. Meanwhile Hitler’s propaganda chief, Joseph Goebbels, came to regard the Jews and the British upper classes as virtually one racial entity. He wrote in his diary in 1 942: “Rothschild. ..took the floor [of the British House of Commons] and delivered a tearjerker bemoaning the fate of the Polish Jews….AII members of Parliament rose from their seats as a silent tribute to Jewry. That was quite appropriate for the British House of Commons, which is really a sort of Jewish exchange. The English, anyway, are the Jews among the Aryans. The perfumed British Foreign Minister, Eden, cuts a good figure among these characters from the synagogue. His whole education and his entire bearing can be characterized as thoroughly Jewish.”

Those who would project a political role onto law enforcement, hoping it will do what political leaders are unable or unwilling to do, only prove that the moral flabbiness on which demagogues thrive is still with us. Given this fact, the lessons of LaRouche’s rise and apparent fall are important. If we study them seriously and act on them, it may turn out that the LaRouche phenomenon was a blessing in disguise — a dry run, under relatively safe conditions, that revealed our hitherto unsuspected weaknesses without our having to pay a heavy price for this knowledge. One thing seems certain: America is too violent and diverse — and too vulnerable to economic crisis — to avoid forever a major internal challenge from some form of totalitarian demagoguery. When that test comes, the story of Lyndon LaRouche may provide the key to an effective and timely response.

King’s bio, from his blog:

William Dennis King was born (1941) in Durham, N.C. and raised in Chapel Hill, N.C. He graduated from the University of North Carolina at Chapel Hill in 1965. He has lived in New York City for over 40 years.

King is the author of two books, Lyndon LaRouche and the New American Fascism (Doubleday, 1989) and Get the Facts on Anyone (Third Edition, Macmillan Reference USA, 1999) (the latter book is widely used as a manual by investigative journalists). He has written scores of articles for local and national newspapers and magazines, the majority relating to the LaRouche network and other political cults and anti-Semitic groups.

I’m reminded by this subject matter of Henry Ford’s THE INTERNATIONAL JEW – THE WORLD’S FOREMOST PROBLEM, published in the 1920s, one of history’s more prominent threats to “the oligarchs” and “parasitic bankers”, which as per King, everybody ought to know really means “the jews”.

9 thoughts on “Lyndon LaRouche: Bad for “The Jews””