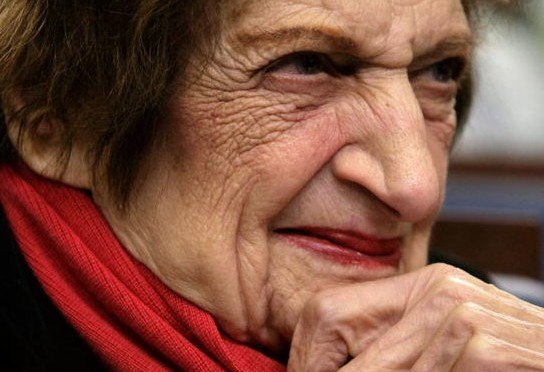 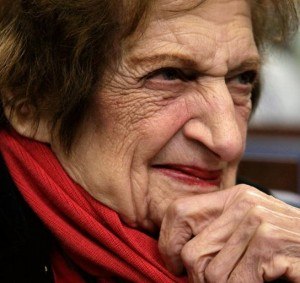 From this day forward, Ms. Thomas will no longer be a part of the White House Press Corps. While I expect nothing less than than a fawning send off from her adoring colleagues in the media, to much of America she will be long remembered, not for her reporting and breaking of the glass ceiling for women in journalism, but for her irrepressible anger and hatred for Israel and the Jews. It’s a pathetic way to end a career, but in Helen Thomas’s case, a fitting one.

For me, Helen’s words brought back memories from my tour of the National Holocaust Museum in DC. It’s important to note that the Nazis didn’t just suddenly round up and gas the Jews out of nowhere. It was part of a long and effective strategy of government sanctioned anti-Jewish text books, children’s storybooks, public posters, and print and radio propaganda designed to generate enough public distrust of and anger toward the Jews that it caused the German people, unaware of the Nazi government’s ultimate goal, to marginalize them.

Priestap is so concerned for jews that she hasn’t noticed that today it is Whites who are targeted for marginalization by virtually all Western governments.

Helen Thomas’s comments that Jews should leave Israel and go back to Poland and Germany were especially weighty for me, as I’ve spent the last couple of weeks reading and watching documentaries about WWII and the Holocaust. I guess she forgot that Jews fled Poland and Germany to escape Nazi death camps, and suggesting they “go back” invoked Holocaust images.

I was sad and enraged when I saw a photo of naked Jewish women walking to a mass grave to be shot, and one carried a newborn. I’ve seen lots of Holocaust photos, but that one in particular brought the tragedy into focus. According to a book on the subject, Nazi’s sometimes buried the babies alive with their dead mothers, instead of shooting them.

The moral of this token’s little testimonial: jewish propaganda even works on blacks.

Priestap also links Leftists Cheerfully Defend Helen Thomas’ Anti-Semitism, which embeds a longer version of the Thomas interview, Helen Thomas Complete (original). Thomas uses the same argument as the jews who have accused her of being ignorant of history: “Why push people out of there who have lived there for centuries?” The leftist “defense” is that Thomas is offering friendly advice to young jewish journos – she probably thought it was safe to speak her mind because, “some of my best friends are jews” and “after all, some of them have said the same thing”.

The right’s Helen Thomas hypocrisy, by Gabriel Winant at salon.com:

In much the same way that some of us on the left are fond of calling out racism among conservatives, right-wing commentators love little more than lobbing the accusation of anti-Semitism back our way. Normally, they aim way too wide, and wing a bunch of people who are plainly just reasonable critics of Israel. (As someone who’s unmistakably Jewish in person, but lacks a particularly Jewish last name, I especially enjoy blogging about Israel and getting called a Jew-hater in the comments. On the Internet, nobody knows you’re a Heeb.)

For once, though, conservatives are piling up on someone who really did cross some kind of line.

Oddly enough, when jews aren’t nervously trying to pass they’re shoving their jewishness in your face.

Helen Thomas: When An Icon Disappoints, by Irin Carmon at Jezebel, “an Israeli-born Jew, whose European grandparents and great-grandparents were among the few in their families to survive Nazi genocide because they were Zionists in what was then known as Palestine”:

There may be only one Helen Thomas — who refused to follow the script for a woman, who has pushed back at every single president since Eisenhower, and who has now disappointed a lot of us. But maybe we’ve moved to a point where she no longer has to stand in for all loudmouthed, fearless women. There have been plenty of firsts and seconds and thirds since then, so even though she is harder for me to admire now, I hope that we no longer need her as badly.

No longer need her as badly? I think we all know what that really means is Carmon wants to ship Thomas to a concentration camp.

Why Helen Thomas and Not Rush Limbaugh? (crossposted at HuffPo), by Joanne “PunditMom” Bamberger:

I don’t condone in any way what she said about calling for the Jewish people to get out of Palestine or the way that she said it. It was a horrible and thoughtless comment and there should be consequences when someone who is supposed to be an objective journalist not only inserts themselves into a news story, but also does it in an offensive and inexcusable way.

But I have to ask — why does Helen have to “resign” but others who have done similar things get to keep their jobs?

If forced resignation is good enough for someone who’s actually contributed to real journalism, then it ought to be good enough for those who work for “news” organizations with an agenda when they cross that kind of not-so-fine line of offensiveness.

But I suppose in this day and age of opinion news, as long as the offenders are making money for their bosses, it will get excused. If Helen Thomas had been working for FOX News, she’d probably still have a job.

Sure, because in PunditMom’s fevered imagination Limbaugh, Hannity, Beck, O’Reilly, and FOX are clearly “anti-semitic”. Why might she imagine that? Well here’s PunditMom on Surviving My Mixed Marriage:

My husband and I are very different in many ways.

The Helen Thomas media blitz: She got fired for WHAT?!, by Meryl Yourish:

It’s a rare person that actually came out and criticized Thomas without pretending that she made her remarks because she’s old or angry. The remarks are sheer Jew-hatred, nothing less. Jews’ millennia-old ties to the land of Israel are utterly discounted by Thomas, who chooses to use the fiction that Israel was a country created specifically by and for Holocaust survivors.

a former New Jerseyan who now resides in Virginia. She is a former liberal who now considers herself center-left, and has been the SNN token woman and token feminist since almost the beginning of the podcast.

Since moving to Virginia she has voted twice for Republican presidential candidates, purchased a handgun and a rifle (and knows how to shoot them), and spends most Fourth of July holidays at Fort Lee in Petersburg. Zionism and finding media bias are Meryl’s two specialties, as well as delivering as much juvenile scorn as a subject will stand. Meryl blogs about Jewish and Israeli issues at yourish.com.

Losing Helen Thomas, by Rachel Sklar at Mediaite (whose alter ego, when she’s in a lighter mood, is Lady Jew-Ga whose “biggest hit” is Bad Shiksa):

It’s not enough to have spent a lifetime being an awesome, trailblazing journalistic and feminist icon. Because longer still than the shadow cast by such a great career is the one cast by the Holocaust.

The verdict is in. People who love Israel and love jews hate Helen Thomas.

15 thoughts on “More Bile for Helen Thomas, From Women”