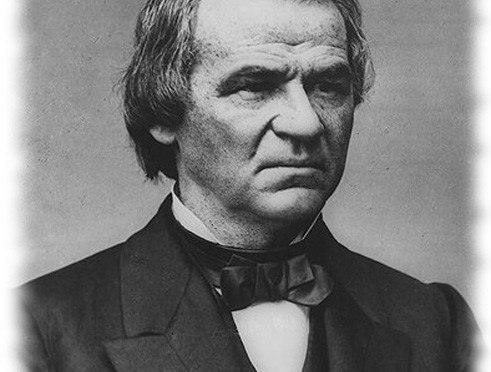 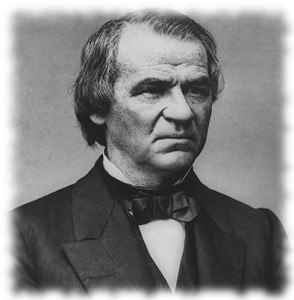 Jamie Kelso’s March 1st podcast brought to my attention the article “Andrew Johnson Reconsidered”, which was published in the March 1998 issue of Wilmot Robertson’s Instauration.

Though Johnson’s oratory was noted for its style, the substance was equally impressive. An outspoken man, to put it mildly, today he would be consigned to the ranks of the insensitive at best or the bigoted at worst. Some of his most amusing outbursts were downright racist. In terms of bombast, he could have given any black preacher a run for his money. Of a pro-black voting rights bill, he said:

It would place every splay-footed, bandy-shanked, hump-backed, thick-lipped, flat-nosed, woolly headed, ebon-colored Negro in the country upon an equality with the poor white man.

This is a country for white men, and by God, as long as I am President, it shall be a government for white men …. This whole vast continent is destined to fall under the control of the Anglo-Saxon race-the governing and self-governing race.

His reasons for feeling as he did are well-documented:

[The] black race of Africa were inferior to the white man in point of intellect-better calculated in physical structure to undergo drudgery and hardship-standing, as they do, many degrees lower in the scale of gradation that expressed, the relative relation between God and all that he had created than the white man.

The following statement, made in 1866, cannot be easily dismissed today, 135 years after Negro emancipation:

The peculiar qualities which should characterize any people who are fit to decide upon the management of public affairs for a great state have seldom been combined. It is the glory of white men to know that they have had these qualities in sufficient measure to build upon this continent a great political fabric and to preserve its stability for more than ninety years, while in every other part of the world all similar experiments have failed. But if any­ thing can be proved by known facts, if all reasoning upon evidence is not abandoned, it must be acknowledged that in the progress of nations Negroes have shown less capacity for government than any other race or people. No independent government of any form has ever been successful in their hands. On the contrary, wherever they have been left to their own devices they have shown a constant tendency to relapse into barbarism.

Johnson didn’t mince words about the Negro problem. Even though there wasn’t much of a Jewish problem in the U.S. in those days, he was not loath to speak up whenever a Hebrew was in need of a dressing-down. Florida’s David Levy Yulee, the first Jew to serve in the U.S. Senate, was berated as a “contemptible little Jew.” Of Louisiana Senator Judah Benjamin (later to become Attorney General, Secretary of War and ultimately Secretary of State in the Confederacy), Johnson said, “There’s another Jew –­that miserable Benjamin! He looks on a country and a government as he would on a suit of old clothes. He sold out the old one; and he would sell out the new if he could in so doing make two or three million.” Benjamin was further lambasted as being of “that tribe that parted the garments of our Savior and for his vesture cast lots.” In pre-ADL days, however, such bold comments were not career killers. Of course, if we had speeches like that in Congress today, C-Span would be a real ratings puller.

As a baseborn white, Johnson instinctively distrusted the Southern planter class, which wielded so much power in western and central Tennessee. Johnson represented the mountainous, eastern part of the state, where the residents tended towards yeomanry. He found that no matter how high he rose in politics, no matter how prosperous he was in his private life, he was never accepted by his “betters.” His particular brand of populism may have been inspired as much by his own experience as by his reverence for the Constitution:

The aristocracy in this district know that I am for the people….They know that I love and desire the approbation of the freemen of this State….The fact of a farmer or mechanic stepping out of the field or shop into an office of distinction and profit, is particularly offensive to an up­ start, swelled headed, iron heeled, bobtailed aristocracy, who infest all of our little towns and villages, who are too lazy and proud to work for a livlihood [sic], and are afraid to steal.

Though easier said than done, his recommendations for a robust republic still resonate:

I want no rabble here on one hand, and I want no aristocracy on the other. Lop off the aristocracy at one end, and the rabble at the other, and all will be well with the republic.

His antipathy to the plantation aristocracy was not just class envy. Johnson blamed it for fanning the flames of secession for its own benefit-certainly not for the benefit of the poor whites who formed the core of his constituency and had to bear the brunt of battle after secession.

I am for a government based on and ruled by industrious, free white citizens, and conducted in conformity with their wants, and not a slave aristocracy. I am for this government above all earthly possessions, and if it perish I do not want to survive it. I am for it though slavery be struck from existence and Africa be swept from the balance of the world … .If you persist in forcing this issue of slavery against the government, I say, in the face of heaven, give me my government and let the Negro go!

In other words, the welfare of the country is more important than the status of the Negro, be he slave or free man. In Johnson’s time, as in our own, too many people of influence and power have these priorities reversed.

It isn’t clear from the article which of Johnson’s quotes came before, during, or after his term as president in the wake of America’s most fratricidal, uncivil war. At the very least readers today can see that 90-odd years after Thomas Jefferson asserted the “self-evident truth” that “all men are created equal” there were still White leaders at the very top who believed Whites could and should govern Whites “to ensure the blessings of liberty to ourselves and our posterity”. You know, the kind of thing recent US presidents believe about jews.