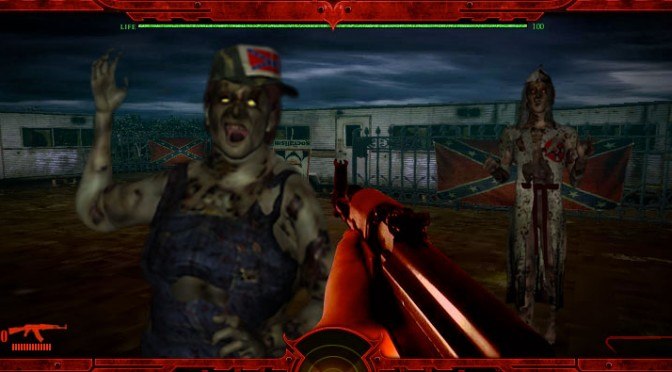 TEA PARTY ZOMBIES MUST DIE! (TPZMD can be accessed for free using any Flash-enabled browser.)

A new online video game company has come up with a controversial new twist on the traditional zombie-killing gaming concept: The zombies targeted for kill are prominent figures in the Tea Party movement.

The game, “Tea Party Zombies Must Die,” features a handful of Tea Party members – including Sarah Palin, Mike Huckabee, Newt Gingrich, and a blood-spattered, bra-clad Michele Bachmann – who the gamer is instructed to kill with either a “melee weapon” (in the first level, at least, it’s a crowbar) or a gun.

Other featured Tea Party targets include: “Generic pissed off old white guy zombie,” “Pissed off stupid white trash redneck birther zombie,” “Factory made blonde Fox News Barbie who has never had a problem in her life zombie,” and “Glenn Beck Zombie (Back from the dead!).”

Upon the player’s death, one is told, “You got Teabagged! P.S. You didn’t have health insurance, so you died. P.P.S. There’s no such thing as God, so you died for eternity.”

Lesser-known targets include “factory made blonde Fox News Barbie who has never had a problem in her life zombie” or the “Koch industries Koch Whore lobbyist pig zombie.” Fox News logos and a recreation of its studios can be seen in blood-spattered screengrabs posted on the company’s website.

Attention to the game’s release has heightened after violent rhetoric from Teamsters President James P. Hoffa, who in a speech over the weekend told President Obama that his supporters would “take out the son-of-a-bitches” in the Tea Party who were waging “war” against unions.

“The liberal media have been preaching for years that conservatives are the ones who invoke violent imagery and rhetoric. Yet in the space of two days, the radical, pro-Obama left calls us ‘son-of-a-bitches’ and says they want to ‘take us out.’ And they follow that with a hideously violent game where they do just that — depicting ways of shooting prominent conservatives, presidential candidates and journalists,” said Brent Bozell, president of the Media Research Center. “The news media would be in an uproar if violence had been incited against liberals. Their silence disgusts me.”

To describe TPZMD as targeting “prominent figures in the Tea Party movement” is to miss the point. All the targets are White. White media figures, White politicians, and most tellingly, poor, powerless, ordinary Whites. Indeed, the Tea Party haters feel righteous about venting their fear and loathing exactly because they see the Tea Party as White. Beside that, their animus is not at all confined to the Tea Party or to prominent media or political figures.

Here’s how TPZMD characterizes who it targets for death:

These are the bugbears of the contemporary anti-White narrative. These are the people the anti-White elite delights in slurring, scapegoating and demonizing. These are the hard-working tax-paying law-abiding citizens they regularly malign as stupid and evil. TPZMD is just one product of their relentless dehumanizing anti-White propaganda.

To describe their propaganda in terms of partisan politics, as media reports do, or as class warfare, as their narrative does, is to be willfully blind to the key point these anti-Whites themselves continually hammer on: The nature of the conflict, as well as their animus, is racial. They distrust and dislike Whites, rich or poor. To top it off they’re dishonest about it. They justify their animus by offering a variety of lame excuses that they wouldn’t consider valid reasons to hate anyone but Whites. They imagine that painting Whites as stupid, religious, or duped makes it OK not only to hate us, but to fantasize about bludgeoning, hacking, and shooting us dead.