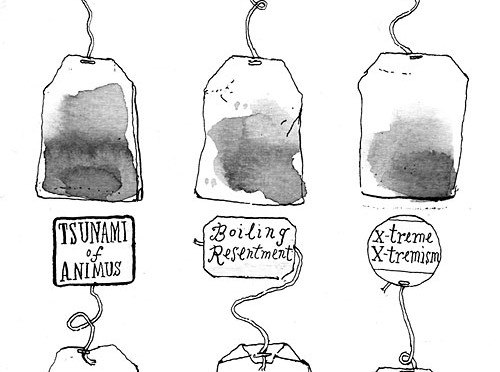 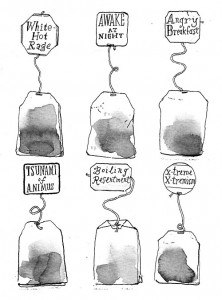 For more than a year media pundits and celebrities and an army of lesser-known left-leaning editorialists and bloggers have ridiculed and dehumanized Tea Party protesters as “teabaggers” and “racists”. With the recent surge in anti-White sentiment openly expressed in the “liberal” media it must be dawning on more and more Tea Partiers that the problems with their country go beyond taxes, healthcare, or socialism.

At the immigration rally, you saw a wide spectrum of races and ethnicities. Those attending were mostly Latino, but the rally also welcomed the participation of Whites, Asians, and Blacks who support a path to citizenship, reuniting families, and providing opportunities to students and veterans.

At the Teabagger rally, the monochromatic masses were spitting and yelling racial and homophobic slurs at Black, Latino, and openly gay congressional reps.

At the immigrations rally, the participants were expressing hope – hope that reform would reunite them with their families. Hope that they would be given the opportunity to fully contribute to society, and the hope that their sacrifices, including the sacrifices of those who have served in the military or have lost their lives defending this country, will not be in vain.

I highlight these opposing images because soon enough, these two groups will collide. The national debate on immigration reform will come soon, and if the Teabaggers act as they have against health care reform, we can expect more vitriol, fear mongering, harassment and acts of violence. These so-called “Americans” will feel even less restrained against people they consider to be “foreign” or “illegal,” deserving even less respect than they gave to our elected officials.

In Whose Country Is It? – NYTimes.com, Charles Blow writes:

The far-right extremists have gone into conniptions.

The bullying, threats, and acts of violence following the passage of health care reform have been shocking, but they’re only the most recent manifestations of an increasing sense of desperation.

It’s an extension of a now-familiar theme: some version of “take our country back.” The problem is that the country romanticized by the far right hasn’t existed for some time, and its ability to deny that fact grows more dim every day. President Obama and what he represents has jolted extremists into the present and forced them to confront the future. And it scares them.

Even the optics must be irritating. A woman (Nancy Pelosi) pushed the health care bill through the House. The bill’s most visible and vocal proponents included a gay man (Barney Frank) and a Jew (Anthony Weiner). And the black man in the White House signed the bill into law. It’s enough to make a good old boy go crazy.

Hence their anger and frustration, which is playing out in ways large and small. There is the current spattering of threats and violence, but there also is the run on guns and the explosive growth of nefarious antigovernment and anti-immigrant groups. In fact, according to a report entitled “Rage on the Right: The Year in Hate and Extremism” recently released by the Southern Poverty Law Center, “nativist extremist” groups that confront and harass suspected immigrants have increased nearly 80 percent since President Obama took office, and antigovernment “patriot” groups more than tripled over that period.

Politically, this frustration is epitomized by the Tea Party movement. It may have some legitimate concerns (taxation, the role of government, etc.), but its message is lost in the madness. And now the anemic Republican establishment, covetous of the Tea Party’s passion, is moving to absorb it, not admonish it. Instead of jettisoning the radical language, rabid bigotry and rising violence, the Republicans justify it. (They don’t want to refute it as much as funnel it.)

There may be a short-term benefit in this strategy, but it’s a long-term loser.

A Quinnipiac University poll released on Wednesday took a look at the Tea Party members and found them to be just as anachronistic to the direction of the country’s demographics as the Republican Party. For instance, they were disproportionately white, evangelical Christian and “less educated … than the average Joe and Jane Six-Pack.” This at a time when the country is becoming more diverse (some demographers believe that 2010 could be the first year that most children born in the country will be nonwhite, less doctrinally dogmatic, and college enrollment is through the roof. The Tea Party, my friends, is not the future.

You may want “your country back,” but you can’t have it. That sound you hear is the relentless, irrepressible march of change. Welcome to America: The Remix.

In The Rage Is Not About Health Care – NYTimes.com, Frank Rich writes:

That a tsunami of anger is gathering today is illogical, given that what the right calls “Obamacare” is less provocative than either the Civil Rights Act of 1964 or Medicare, an epic entitlement that actually did precipitate a government takeover of a sizable chunk of American health care. But the explanation is plain: the health care bill is not the main source of this anger and never has been. It’s merely a handy excuse. The real source of the over-the-top rage of 2010 is the same kind of national existential reordering that roiled America in 1964.

If Obama’s first legislative priority had been immigration or financial reform or climate change, we would have seen the same trajectory. The conjunction of a black president and a female speaker of the House — topped off by a wise Latina on the Supreme Court and a powerful gay Congressional committee chairman — would sow fears of disenfranchisement among a dwindling and threatened minority in the country no matter what policies were in play. It’s not happenstance that Frank, Lewis and Cleaver — none of them major Democratic players in the health care push — received a major share of last weekend’s abuse. When you hear demonstrators chant the slogan “Take our country back!,” these are the people they want to take the country back from.

They can’t. Demographics are avatars of a change bigger than any bill contemplated by Obama or Congress. The week before the health care vote, The Times reported that births to Asian, black and Hispanic women accounted for 48 percent of all births in America in the 12 months ending in July 2008. By 2012, the next presidential election year, non-Hispanic white births will be in the minority. The Tea Party movement is virtually all white. The Republicans haven’t had a single African-American in the Senate or the House since 2003 and have had only three in total since 1935. Their anxieties about a rapidly changing America are well-grounded.

In Too much tea party racism – Salon.com, Joan Walsh writes:

The tea party movement is disturbingly racist and reactionary, from its roots to its highest branches.

The psychological device they’re using in the battle over healthcare is the same one that’s been used against anyone opposed to immigration. They call Whites “racist” for objecting to anything we don’t believe is in our best interests, trying to guilt-trip us and implying that we’re somehow morally or mentally defective. As we can see from the full-throated anti-White reaction to even the largely deracinated Tea Partiers, whether we think or speak in explicitly racial terms is irrelevant. Our “anti-racist” antagonists are hyper-sensitive to race and any conflict with their own racial interests, or as in the case of Joan Walsh, act as a self-righteous proxy for such interests. White leaders perversely reject and profess distaste for our group interests even as we see an increasing number of non-White leaders who openly and unabashedly advocate in favor of theirs.

White fears are justified. We had a country of our own and still want one, organized to our tastes and run for our benefit. What sane group of people does not? In 1965 we were told that the changes to the immigration laws would not alter the ethnic makeup of our country. Anyone who foresaw that it would was smeared as an insane “racist”. Today it’s clear that immigration has in fact radically changed the ethnic makeup of the country. Now we’re told it’s irrepressible, irrevocable, and the country is no longer ours. Anyone angered by this situation or the duplicity used to produce it is smeared as an insane “racist”.

We are being displaced and dispossessed by genocidal levels of immigration and concomitant inter-racial transfers of wealth and power. This is foisted on us by liars and hypocrites whose deceptions, self-interests, and disdain for us becomes more transparent every day. They control all the major channels of education and discourse, and thus shape the terms of debate, defining and denigrating practically anything we have to say about any of this as “hate”. Their moralizing invokes injustices decades or centuries past, while they disregard and even celebrate the injustices being done to Whites right here, right now. They project onto us and decry their own malign motives and guilty deeds, shamelessly broadcasting a never-ending stream of race-based vitriol and fear mongering from myriad well-funded, high-profile sources, attacking us for peaceably expressing legitimate political interests. We have accommodated and appeased them for too long. For decades we have demonstrated our good faith, which they have taken advantage of and not reciprocated. The harder they try now to scapegoat us and the louder they insinuate that our calls for self-determination portend violence, the more they reveal their malevolent intent.

32 thoughts on “Who Hates the Tea Party and Why”