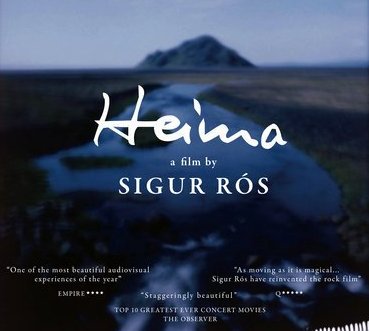 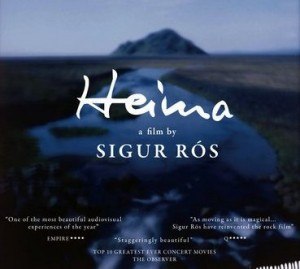 Last year, in the endless magic hour of the Icelandic summer, Sigur Rós played a series of concerts around their homeland. Combining both the biggest and smallest shows of their career, the entire tour was filmed, and now provides a unique insight into one of the world’s shyest and least understood bands captured live in their natural habitat.

The culmination of more than a year spent promoting their hugely successful ‘Takk…’ album around the world, the Icelandic tour was free to all-comers and went largely unannounced. Playing in deserted fish factories, outsider art follies, far-flung community halls, sylvan fields, darkened caves and the hoofprint of Odin’s horse, Sleipnir*, the band reached an entirely new spectrum of the Icelandic population; young and old, ardent and merely quizzical, entirely by word-of-mouth.

The question of the way Sigur Rós’s music relates to, and is influenced by, their environment has been reduced to a journalistic cliché about glacial majesty and fire and ice, but there is no doubt that the band are inextricably linked to the land in which they were forged. And the decision to film this first-ever Sigur Rós film in Iceland was, in the end, ineluctable.

Shot using a largely Icelandic crew (to minimise Eurovision-style scenic-wonder overload), ‘Heima’ – which means both “at home” and “homeland” – is an attempt to make a film every bit as big, beautiful and unfettered as a Sigur Rós album. As such it was always going to be something of a grand folie, but one, which taking in no fewer than 15 locations around Iceland (including the country’s largest ever concert at the band’s Reykjavik homecoming), is never less than epic in its ambition.

Material from all four of the band’s albums is featured, including many rare and notable moments. Among these are a heart-stopping rendition of the previously unreleased ‘Gitardjamm’, filmed inside a derelict herring oil tank in the far West Fjords; a windblown, one-mic recording of ‘Vaka’, shot at a dam protest camp subsequently drowned by rising water; and first time acoustic versions of such rare live beauties as ‘Staralfur’, ‘Agaetis Byrjun’ and ‘Von’.

* The huge horseshoe canyon at Ásbyrgi was, according to legend, formed by the hoofprint of this mythical beast.

It was voted by users of the Internet Movie Database (IMDB) as the best documentary of all time. During this tour they played two big open-air concerts at Miklatún – Reykjavík (30th July) and Ásbyrgi (4th August), as well as small scale concerts at Ólafsvík (24th July), Ísafjörður (26th July), Djúpavík (27th July), Háls, Öxnadalur (28th July) and Seyðisfjörður (3rd August) and a protest concert at Snæfellsskála (3rd August). The documentary also includes footage of an acoustic concert played for family and friends at Gamla Borg, a coffee shop in the small town Borg, on 22nd April 2007.

In the summer of 2006, Sigur Rós returned home to play a series of free, unannounced concerts for the people of Iceland. This film documents their already legendary tour with intimate reflections from the band and a handful of new acoustic performances.