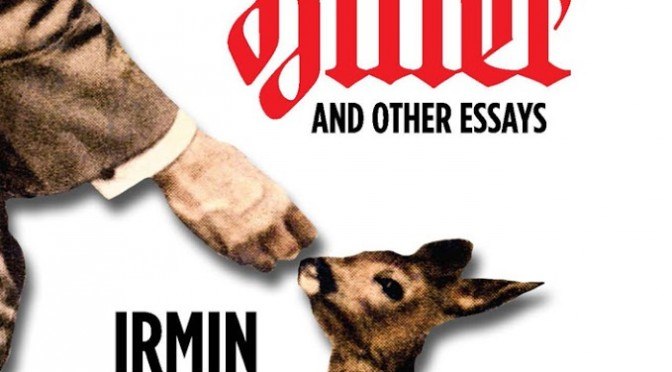 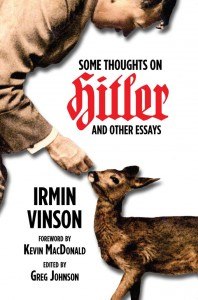 I bought a new book last weekend. While I have not yet finished it, what I have read so far is absolutely wonderful – a clear, sensible examination of topics that many White advocates consider difficult or imprudent to discuss.

The book is Irmin Vinson’s Some Thoughts on Hitler & Other Essays. The promotional blurb reads:

Why are we subjected to more anti-Hitler propaganda today than during World War II?

Why are white nations blanketed with Holocaust memorials, even countries where the Holocaust did not take place?

Why do most people know how many Jews died during World War II but have no idea how many non-Jews died?

Irmin Vinson’s Some Thoughts on Hitler and Other Essays is a book about propaganda. Vinson explains how the organized Jewish community uses the memory of Adolf Hitler and the Holocaust as weapons to stigmatize the patriotism and ethnic pride not just of Germans, but of all whites, including those who fought against Hitler.

Vinson explains how this spurious white guilt and self-hatred has been used to break down white resistance to multiculturalism, miscegenation, affirmative action, and the invasion and colonization of white homelands by non-white immigrants—trends which, if not reversed, will lead to white extinction.

In these clear, rational, and highly readable essays, Irmin Vinson exposes and demolishes this insidious propaganda, clearing the way for the reemergence of white pride and patriotism. Some Thoughts on Hitler will change more than your view of the past; it will also change your understanding of the present—and of our destiny

Vinson’s long essay titled Holocaust Commemoration forms the core of the book. I do not recall reading this essay previously, but passages like this one made me wonder if I must have:

The public discourse of the Jewish Holocaust is incoherent: it speaks in the universalist language of tolerance and inclusion, while justifying Jewish particularism in Israel; it claims to find in stories of Jewish wartime suffering distinctively Jewish humanitarian lessons, applicable to everyone everywhere, while borrowing them from the historical religion of the West; it teaches human brotherhood, while elevating the suffering of Jews far above all other suffering; it commemorates Jewish powerlessness, while demonstrating Jewish power. But beneath all its deceptions and contradictions lies the message of broad Western responsibility for German mistreatment of Jews, a special culpability which Rabbi Eliezer Berkovits, a self-styled Holocaust theologian, has called “the measureless Christian guilt toward the Jewish people.” [6]

Institutionalized Holocaust commemoration in the United States presupposes that White Americans are notably deficient in the various moral qualities that Holocaust remembering purportedly inculcates, whereas Jews, owing to their group experience of nazi persecution, are the appropriate teachers of necessary lessons in racial tolerance. Those peculiar meanings did not, needless to say, arise unaided from stories of German atrocities against European Jewry. The truth of our collective guilt required an aggressive reinterpretation of the Second World War, an assault on the moral legitimacy of the Western nations that fought and won it. Through a remarkable transformation, the Allied victors have become co-agents in the crimes and alleged crimes of the regime they defeated, and the war itself has been reimagined as a Judeocentric moral test, which all of us conspicuously failed. Our measureless guilt, together with the entire edifice of Holocaust commemoration erected upon it, is a doctrine of moral equivalence projected back into the past in order to shape the present.

Vinson fleshes out and hammers home the points I only tersely outlined in A White Guide to the Jewish Narrative. Beside jewish morality and the holocaust narrative, touched on above, Vinson identifies an early example of the generalization of the jewish narrative to “minorities” and the racial aggression behind it:

In 1944, as the war in Europe was drawing to a close, Jewish playwright Arthur Miller, then in his late twenties, sat down to write Focus, his first and only novel. [7] It would be a critical moral fable about his fellow Americans, for Miller did not share the heroic self-image and traditional patriotism that characterized most other Americans during the war years. Focus, published in 1945, would be an imaginative elaboration of a very simple thesis: being a Jew in Roosevelt’s America was like being a Jew in Hitler’s Germany. In their irrational hatred of the Jewish Other, White Americans, the same White Americans who were then fighting fascism in Europe and the Far East, were no different from nazis.

Lawrence Newman, the novel’s WASP protagonist, is a corporate personnel manager whose quiet bourgeois world is permanently disrupted after he begins to wear eyeglasses, which strangely make him look Jewish, a dangerous liability in the America of Miller’s fertile imagination. Without glasses Newman is a gray-flanneled Episcopalian, a normal White American, despite his ethnically ambiguous surname; with glasses he is perceived and treated as a despised Jew, persecuted and even attacked by other normal White Americans, all of whom are racist and anti-Semitic, as Newman had been before he gained his factitious Jewishness. The novel’s organizing narrative conceit, that eyeglasses can turn an anti-Semitic Gentile into a Jew, conveys an obvious Judeocentric meaning: Lawrence Newman, in his culpable blindness to the intolerance that surrounds him, must first be seen as a Jew in order to see clearly. Thus in his new role as a reluctant Jew, now seeing and experiencing the world through the Jewish lenses conferred by his racial marginalization, Newman gradually discovers that his homogenous New York neighborhood, which had once seemed a benign social environment of communal amity, is in reality, beneath its placid surface, a seething caldron of xenophobia and hate, at least for anyone with the misfortune to be different, or in his case merely to appear different. “Behind these snug, flat-roofed houses,” Newman now perceives, “a sharp-tipped and murderous monster was nightly being formed, and its eyes were upon him.”

The novel’s historical context is central to its subject. In Focus the European war, depicted in our propaganda as a titanic struggle of good against evil, seems little more than a distant contest between two rival groups of pogromists, each nurturing its own “murderous monster” of racial hatred. In Europe German nazis conduct mass hangings of Jews, while at home angry anti-Semites, organized into the Christian Front, part of a large network of patriotic organizations spread across the country, beat Jews and rape Puerto Ricans as they await the return of the American military, who will then assume the lethal role of storm troops in driving Jews from America, beginning first in New York, the center of Jew-hatred. White America’s cleansing war against Jewry will begin, as an activist neighbor informs Newman, “when the boys come home,” since American combatants in the European war are at one with their German enemies in their implacable anti-Semitism.

In the political environment we now all inhabit, nothing in Focus is startling, nothing would be out of place in a sensitivity workshop or an anti-racialist educational exercise. The novel’s vision of a virulently racist America would have appeared radical in 1945; now it is commonplace, especially for young Whites immersed in a rigorous program of multicultural miseducation. Miller, alarmed by the failure of non-Jews to comprehend “the threatening existence of Nazism,” and unimpressed by the fact that many men of his age cohort were then dying in Europe fighting Germans, took it upon himself to teach an early version of what would eventually become the most insidious of the Jewish Holocaust’s numerous lessons, namely that pathological (“nazi”) hatreds lurk behind the West’s superficially civilized exterior. Whereas American wartime propaganda had, naturally enough, presented NS Germany as the moral antonym of the United States in particular and of the democratic West in general, Miller substituted a much different contrastive structure, placing innocent Jews on one side and lethally malevolent Whites on the other, with racial minorities like Blacks and Puerto Ricans in ancillary roles as occasional victims of White intolerance. This structure, which Miller may have been the first to discover, conflated Germans and their enemies in order to nazify White Gentiles as a whole. Focus was a thorough defamation of Euro-America for its endemic anti-Semitism and racial hatred, the purpose of which was to efface any significant moral distinction between ourselves and the propaganda image of the Nazi. Miller’s nazification required the Nazi as the acknowledged representation of evil, but his concrete targets were White Americans, who had not yet seen their own visible racial pathologies.

From this Vinson boldly infers:

An imaginative Jew writing before the liberation of the German concentration camps could arrive at nazifying Holocaust propaganda without the Holocaust, which suggests that the Holocaust does not represent events during the Second World War but rather reveals Jewish attitudes toward their benefactors. The Holocaust, as an idea, was latent Jewish racial aggression awaiting both a symbol and an opportunity to express itself.