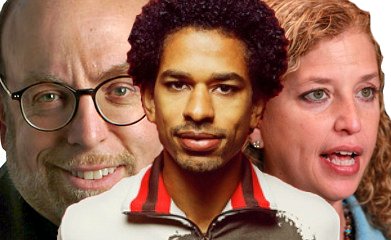 During a discussion on MSNBC’s The Cycle concerning Mitt Romney‘s assertion that President Obama should “take [his] campaign of division and anger and hate back to Chicago”, Touré, the program’s co-host and designated angry black man, got angry:

“That really bothered me,” he said. “You notice [Romney] said anger twice. He’s really trying to use racial coding and access some really deep stereotypes about the angry black man. This is part of the playbook against Obama, the ‘otherization,’ he’s not like us.”

“I know it’s a heavy thing, I don’t say it lightly, but this is ‘niggerization,’” Touré said to the apparent shock of his co-panelists. “You are not one of us, you are like the scary black man who we’ve been trained to fear.”

Naturally this led to a battle between Touré and conservative co-host S.E. Cupp. She took particular issue with the fact that Touré admitted that VP Joe Biden‘s “chains” comments were divisive, but is now calling Romney a “racist” for saying the Obama campaign is “angry.”

“Do you see how dishonest that is?” she asked.

Touré denied calling anyone a racist, which prompted Cupp to say, “Certainly you were implying that Mitt Romney and the base will respond to this dog-whistle, racially-charged coding, and hate Obama, the angry black man?”

“That’s so irresponsible,” Cupp answered back.

“This is not a revolutionary comment,” Touré later said. “This is a constituency all-white party that rejects the black vote.”

Indeed, anti-White rhetoric in media and politics is a long-term trend. Touré’s comments call to mind Cassandra Jackson’s Huffington post article from June, Why the War on Affordable Health Care is a War on Blacks and Latinos, which I discussed in a podcast titled Guilt-Tripping.

Niggerization, if the term has any meaningful sense, describes a political environment such as we have today, whereby race-conscious blacks like Touré freely project their own racial fears and animosities onto hopelessly deracinated Whites like Romney. This niggerization was preceeded and is enabled by judaization, whereby race-conscious jews lecture and lord over deracinated Whites. For example, in faulting the Republican party for being too White, Touré is simply aping the attitudes and tactics of race-conscious jews. As Harold Meyerson wrote in 2008:

Republican conventions have long been bastions of de facto Caucasian exclusivity, but coming right after the diversity of Denver, this year’s GOP convention is almost shockingly — un-Americanly — white. Long term, this whiteness is a huge problem.

There is a reason that the Democratic Party is far more diverse than the Republican Party, because the natural home, politically on major issues to Hispanics, to women, to Jews, to Asian-Americans, the diverse spectrum — to African Americans.

The entire spectrum of diversity is comfortable in the Democratic Party because we stand up for the issues that matter to those communities and Republicans shun them.

Non-Whites who participate in the discourse hosted by the thoroughly judaized corporate media are expected to wear their racial identity on their sleeve and regularly present their race-based grievances against Whites. Any White who might respond from a perspective explicitly favorable to Whites has already been excluded or removed. The deracinated Whites who remain can only sputter helplessly about how “divisive” and “irresponsible” their unrestrained racial antagonists are, the pretense being, despite constant reminders otherwise, that the only responsible divide is ideological.

The most notorious icons of Whiteness – Romney, Ann Coulter, Rush Limbaugh, Sean Hannity – are strictly judeo-conservative, afforded their limelight only so long as they profess love and respect for jews and Israel. Tellingly, it is these deracinated, pro-jew Whites who are most often identified as “nazis”, accused of using dog-whistles to appeal to Whites, while secretly hating jews.

What we see here are the reality-inverting, guilt-tripping tactics I referred to in my discussion of Jackson. Non-Whites are using the jewish playbook, passively-aggressively accusing Whites of sneakily conspiring to stereotype, scapegoat, and even war on them. One clear marker is how they unapologetically assert their Otherness even as they pathologize and demonize Whites for noticing. It taps into decades of cultural marxism and anti-White propaganda, and is ultimately based on a centuries-old jewish blame-shifting narrative that put Whites on the defensive back when blacks were still in chains.

The simple fact is that non-Whites are waging and currently winning a war against Whites. It is a war the vast majority of Whites will not think or speak of, much less fight. The more Whites concede, the more non-Whites demand. Their chauvinists fight more or less openly for the interests of their people, allying with each other against Whites. All Whites get in the judaized, niggerized mainstream is indirect, ineffective code-speak.