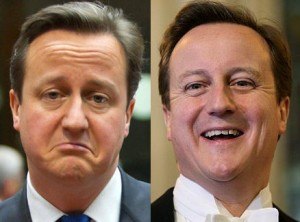 The anti-White/pro-jew regime in action in Britain.

MPs do not represent the people of Britain properly because they are too white, David Cameron has said.

The Prime Minister said there is “much more to be done” to encourage more people from ethnic minority backgrounds to enter Parliament.

Mr Cameron made the comments in a preface to a book, “Rainbow over Westminster”, which charts the increasing number of MPs who are black or from ethnic minority backgrounds.

In the preface, Mr Cameron said that the book “serves as a reminder – that there is much more to be done.

“Our Parliament is still nowhere near representative enough of the country we live in today.

“We should not presume that this will simply correct itself over time. History isn’t written for us: it is written by us.”

There are so many Jews at the top of Britain’s Conservative party, Prime Minister David Cameron once quipped, that it should be known as the Torah party rather than the Tory party.

With the announcement last Wednesday that Ian Livingston was selected as trade and investment minister and elevated to the House of Lords, Cameron has appointed to the government possibly its most committed Jew yet, and certainly its most outspoken supporter of Israel — which Livingston has called “the most amazing state in the world.”

Three years ago The Jewish Chronicle published a list of Jewish MPs in Britain’s parliament, naming 24. The Jewish population in the UK at that time was – and probably still is – around 280,000 or just under 0.5%. There are 650 seats in the House of Commons so, on a proportional basis, Jews could expect 3 seats. But with 24 they were 8 times over-represented. Which meant, of course, that other groups were under-represented.

The UK’s Muslim population is about 2.4 million or nearly 4%. Similarly, their quota would be 25 seats but they had only 8 – a serious shortfall. If Muslims were over-represented to the same extent as Jews (i.e. 8 times) they’d have 200 seats. Imagine the hullabaloo.

Over-representation in the House of Commons is only part of the picture. Many more Jews have been inserted into the House of Lords and other non-elected and unaccountable positions. An even bigger worry is the huge number of non-Jewish Zionists that have infiltrated every level of political and institutional life. They swell the pro-Israel lobby to such an extent that it is believed to account for 80% of the Parliamentary Conservative Party, which now rules with the Liberal Democrats as their junior coalition partner.

The Jewish Chronicle, in its 2006 special report ‘Team Cameron’s big Jewish backers’, revealed the support that enabled Cameron to suddenly burst into the political limelight, almost unknown, to take the Conservative leadership. With no significant achievement under his belt he was then able to manoeuvre, with the help of his backers, into Britain’s PM slot.

One thought on “Cameron: Too White = Bad, Too Jew = Good”