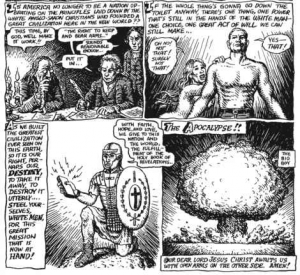 See Voice of Albion: Simon Sheppard of The Heretical Press (Download), at Renegade Broadcasting. Sheppard comes at the War on Whites, nationalism, racialism and sex differences with a focus on behavior, psychology and Darwinism. It’s a stimulating two-hour discussion, well worth the listen.

The work Sheppard posted at The Heretical Press, and especially the essays of his accomplice in heresy Stephen Whittle (under the penname Luke O’Farrell), helped educate and bring me up to speed. Their arrest and persecution was a gut check, a glimpse of what the judaized justice system can do to anyone who stands, or even simply speaks, against them. I’m glad he was willing to speak to Paul, and glad to hear that he has not recanted.

Procedural Analysis: The DSoD Theory is an example of Sheppard’s original psychological theorizing, mentioned in the discussion. The image above is the “punchline” of the R. Crumb cartoon Sheppard refers to, When the Goddamn Jews Take Over America, a fantastic inversion of the Samson Option reality.

One thought on “Simon Sheppard Interviewed by Paul Hickman”