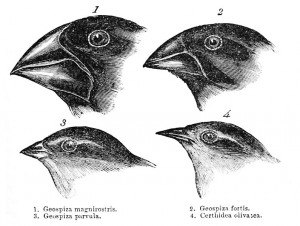 More on Yockey’s critique of Darwinism, consciousness, evolution and life.

Yockey saw everything in terms of Grand Dichotomies, anthropomorphized forces utterly opposed. He saw Darwinism as an outgrowth of Rationalism, like Liberalism, and thus felt compelled to deconstruct Darwinism using sophmoric strawman arguments.

The easiest refutation is the palaeontological. Fossil deposits — found in various parts of the earth — must represent the possibilities generally. Yet they disclose

only stable specie-forms, and disclose no transitional types, which show a species “evolving” into something else. And then, in a new fossil hoard, a new species appears, in its definitive form, which remains stable. The species that we know today, and for past centuries, are all stable, and no case has ever been observed of a species “adapting” itself to change its anatomy or physiology, which “adaptation” then resulted in more “fitness” for the “struggle for existence,” and was passed on by heredity, with the result of a new species.

This is denial, not refutation. The palaeontological record is incomplete, full of holes, yet even a puzzle missing pieces can convey information.

Calling Culture-man a “higher” animal still treats him as an animal. Culture-man is a different world spiritually from all animals, and is not to be understood by referring him to any artificial materialistic scheme.

Yockey rejected the reality that man is animal. What he identifies as spirit can be just as well understood as consciousness, awareness. Culture-man is conscious-animal. Culture springs from consciousness.

If this picture of the facts were correct, species ought to be fluid at the present time. They should be turning into one another. This is, of course, not so. There should actually be no species, but only a surging mass of individuals, engaged in a race to reach — man. But the “struggle,” again, is quite inconclusive. The “lower” forms, simpler — less fit? — have not died out, have not yielded to the principle of Darwinian evolution. They remain in the same form they have had for — as the Darwinians would say — millions of years. Why do they not “evolve” into something “higher”?

Yockey rejected speciation, the name and details of the theory were irrelevant. Thus the silly strawmen. Individual species appear stable, the whole is in tumult.

The utilitarian aspect of the picture is also quite subjective — i.e., English, capitalistic, parliamentarian — for the utility of an organ is relative to the use sought to be made of it.

The naive, tautological, doctrine of utility never asked “Utility for what?”

Utility for survival, of course. “Fitness”, in an evolutionary sense, is defined as objectively as possible, in terms of survival. Yockey, however, seemed determined not to see it this way.

This primacy of the spiritual inverts the Darwinian materialism on the doctrine of utility.

Yockey asserted the “primacy of the spiritual”, placing his own mysticism over and above material reality. It’s far easier to assert the primacy of material reality, because whatever anyone has to say, it’s right there just waiting to be probed and tested – this is the rationalism we call science.

The whole grotesquerie of Darwinism, and of the materialism of the entire 19th century generally, is a product of one fundamental idea — an idea which happens also to be nonfactual to this century, even though it was a prime fact a century ago. This one idea was that Life is formed by the outer.

And yet, in a purely factual sense, what is Life? Life is the actualizing of the possible. The possible turns into the actual in the midst of outer facts, which affect only the precise

way in which the possible becomes actual, but cannot touch the inner force which is expressing itself through, and, if necessary, in opposition to, the outer facts.

“Life is the actualizing of the possible” sounds Darwinian, e.g. adaptive radiation.

Life is the unfolding of a Soul, an individuality.

Darwinism, to Yockey, was of a kind with two jewish intellectual movements, Marxism and Freudianism.

As Socialism [i.e. Spengler’s Prussianism, Aryanism, National Socialism] creates the form of the Future, Marxism slips into the Past with the other remnants of Materialism. The mission of Western man is not to become rich through class-war; it is to actualize his inner ethico-politico-Cultural imperative.

There is another view of life and evolution which embraces a rational, Darwinian understanding of reality, rather than rejecting it. In his July 2014 broadcast, William Pierce: Cosmotheism’s Hard Way, Kevin Strom quotes Don Kaiser’s Life is Evolution:

THE SOLE CHARACTERISTIC that ultimately distinguishes living from non-living matter is classical Darwinian evolution. Life is simply matter that evolves.

The two are inseparable. Given the fact that all life forms die, how do they persist through time and changing environments? Every environment harboring life forms must change, simply because of their existence, so evolution is the only way life forms can persist through time. Not only did Charles Darwin discover what makes life possible despite the fact that all life forms eventually die, he unwittingly discovered the sole feature that distinguishes living from non-living matter. Charles Darwin defined life.

To the Cosmotheist, Nature is God. And science, logic, observation, reason, and the deepest stirrings of our race-soul are the means of apprehending God … Mathematics, physics, and genetics are the real words of God.

Cosmotheism asserts that we are matter and energy become conscious — and, more than that, that we are the Universe become conscious, that we are Nature become conscious of itself and all that that implies. It further shows us that we have reached a radically new stage in the evolution of the Universe — as significant, perhaps, as the evolution of non-living matter into living beings — as significant as the first rise of consciousness itself – as significant as the faltering steps of the first amphibians on the surface of the Earth. This new stage has come only recently, when European man first grasped the concept of evolution, and discovered the principles of genetics and heredity. It is the stage of conscious evolution — of the ability of living beings to direct, and vastly accelerate, the future course of their own evolution.

To the extent jews have outcompeted Whites it is by being more conscious of themselves and their survival as a people. In contrast, and in large part due to the efforts of jews, Whites have been relatively unconscious. Thus we seek to awaken, to inform and educate ourselves and others. The study of previous attempts, like Yockey’s, is part of this process.

7 thoughts on “Yockey on Culture and Race – Part 6”