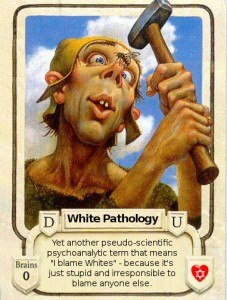 I argued in the last installment, Pathology and Pathogen, that jewish psychoanalytic theories of “anti-semitism”, as a form of inborn mental disorder that afflicts non-jews, are not just a pseudo-scientific fraud, a one-sided view of jews as blameless dressed up as disinterested and authoritative science, but that behind that fraud, driving it and enabling it to work effectively, are real racial differences in consciousness and mentality.

In short, the jews deliberately psychopathologize Whites to manipulate Whites. And they generally get the defensive, demoralized, ennervated reaction they seek. As an example, even some Whites who have a greater than average understanding of race and the jews pay lip service to a vaguely defined “white pathology”, a loaded term which to a degree adopts the jewish view, seeing Whites as afflicted with a congenital mental disease which is the ultimate source of any problem we complain about.

Andrew Joyce’s article, which I was responding to, at least implied a connection between White pathological behavior and the jews. I only drew a line connecting those dots. In many other cases, however, the use of the term “white pathology” seems to have the effect if not intent to distract anyone from making a connection to anyone but Whites. The very idea of pointing a finger at anyone besides Whites is seen as irresponsible, as a sign of stupidiy or insanity, or even “white pathology”. It is in these more blatant examples that the solipsistic and tautological nature of the term “white pathology” becomes clear.

I didn’t know until today that when you google “white pathology” the top two hits are to Tim “White Like Me” Wise, a jew who literally makes a living at psychopathologizing Whites. I’ll leave it to the pro-White people who continue to use the term “white pathology” to try and distinguish their thinking and purpose from Tim Wise’s.

One response I got to Pathology and Pathogen reminded me of an important point, another connection, which I’ve neglected to mention.

Tanstaafl is still caught up in his monocausal explanation of White pathology : it’s all the fault of the Jews. … There must exist some congenital weakness in Whites, but Tanstaafl refuses to acknowledge that. In this he is remarkably similar to the Jews themselves : the own group is never at fault.

This kind of comment is an illustration of the jewish psychopathologization I’m talking about. The term “monocausalism” is another way of saying “anti-semitism”. It’s more psychoanalysis. The implication of the term in either case is that it’s stupid and even crazy to find fault with the jews – the only difference is in how much fault.

I took this comment as an attempt to use the very psychological mechanism, the weakness I described Whites as having relative to jews. Jews exploit the White tendency to objectivity and even-handedness by cultivating a truly pathological fear, the fear that siding wholeheartedly with our own race against its enemies is stupid or crazy.

At the root of all this, and the point I’m trying to emphasize this time, is the comforting delusion that Whites don’t have any real problems or enemies but ourselves. In fact, this term “monocausalism” was actually coined a few years ago by someone who was upset that I had identified and criticized the promotion of this delusion, which I called the “suicide meme”. What I had noticed is that certain pundits use the term “white suicide” as a way of blaming Whites and excusing the jews. The idea is that something’s wrong. What’s wrong? Whites are killing themselves! Therefore, not the jews. This kind of thinking is particularly popular with pundits and in forums which allow some limited expression of racial awareness but more or less actively suppress criticism of the jews.

There’s a connection between “white suicide” and “white pathology”. They operate on the same psychological mechanism. The rationale is that we’re supposedly smart and sane if we take responsibility, if we DON’T blame someone else, or at least as long as we don’t blame the jews. So instead we’re encouraged to do something truly stupid and insane, and blame our own race. Not ourselves personally, mind you. That’s a key part of the trick. It’s an appeal to SELF-esteem as opposed to GROUP-esteem. This idea is that our poor race is ill, but not we individuals who are capable and enlightened and accept “white pathology”.

Seeing these mind games and finger-pointing as part of a “conflict of interest” between Whites and jews is a way to explain what’s happening objectively. It’s accurate enough. But perception of the conflict really shifts when you shake off the urge to stick to an objective view, above and outside the conflict. When you recognize jewish manipulation and fraud and take it personally rather than detaching yourself from it. When you recognize the insidiously stealthy and consciously aggressive hostility of an implacable racial enemy. Once you see it this way it’s impossible to justify inaction. When you see the asymmetric relationship between Whites and jews as essentially parasitic, when you realize it has gone on for millenia, then attempts to excuse and shift blame become beside the point. Do you side with your own kind, or with the parasite, the pathogen afflicting them?

Here is another reason why recognizing the long-term, parasitic, asymmetric racial conflict for what it is is more useful than any amount of demoralizing hand-wringing about “white pathology”, “white suicide”, or “monocausalism”. The inevitable fallback, the next false fear that gets played up whenever the “not the jews” trick fails, is that Whites will become “just like the jews”, “as bad as the jews”. The host will turn into a parasite? Wouldn’t that be a neat trick. It’s based on the same premise as Boasianism – the jewish fraud that racial characteristics are superficial and plastic. Who would Whites parasitize even if we could start thinking and behaving like parasites? The other parasites? How would that be worse than being preyed upon and blaming ourselves into extinction?

The nonsense of the “suicide meme” really comes out when compared and contrasted with the more apt term, genocide. I ran across an excellent example this week on Twitter.

Bronze Age Pervert: “When you use made-up words like “genocide” remember to whose tune you’re dancing, http://en.wikipedia.org/wiki/Raphael_Lemkin there’s a reason word didn’t exist”

Indeed, let’s never forget and never forgive the jews for coining and promoting the word “genocide”, which like “racism” they have used to guilt-trip and psychopathologize Whites. But at least “genocide” captures the essence of the phenomenon, the group conflict, and doesn’t let anyone else off the hook like “suicide” does. I’d be happy to use another word. We could call it “jewicide”, death by jewing. That would fit the toxic effect jews have even on non-White groups. But there’s no good reason for Whites to care about any other genocide more than White genocide. Decrying White genocide is an appeal to White sanity, not a plea for mercy from the jews.

Bronze Age Pervert: “You don’t have to be Frankfurt skrewl Marxist pro-diversity/whatever to be turned off by silliness of “white genocide”/”love your race” bs”

Here’s the pervert’s real problem. He doesn’t identify positively as White. He doesn’t love his race. Even overhearing somebody else saying they do “turns him off”. It’s somebody else’s fault that he’s a narcissist.

Bronze Age Pervert: “@caseysuperstar It’s trite stuff savages do, other races with no history of achievements. White people who need this boosterism are fucked.”

Only “savages” have the good sense to cheer for their own team. “Civilized” folk sneer at their own team. Deny they even have a team. This is how rootless cosmopolitans actually think.

That’s the crux of it: “sappy victimology, gives comfort to enemy, worst of all false”. Stupid, stupid, stupid. But that same criticism applies just as well to calling it “suicide”.

Casey, a self-professed national socialist, didn’t see it my way – he liked the pervert’s twits, and retwitted that last one, which is how I found the rest. Casey summed up his own rationale this way:

Casey: “@eurorabbit @BronzeAgePerv If you want all the good men to run away, don’t take responsibility for anything and create a victim complex.”

“Victim complex”! Psychoanalysis again. We might turn into jews!

I’ll wrap up this installment with a few minutes from a recent podcast by Bill Rhyes (“Anders Behring Breivik 2”, 12:12-16:50, 6 Feb 2015). Rhyes addresses the importance of getting our heads straight and offers a clear, unblinking view of the harsh reality of our situation. For that very reason his attitude is an inspiration to good men, good White men.

Fear of genocide. Fear that you’re responsible for not doing anything about it, that you won’t even recognize it for what it is. These are legitimate fears for good White men to have.

18 thoughts on “Fear and Genocide”