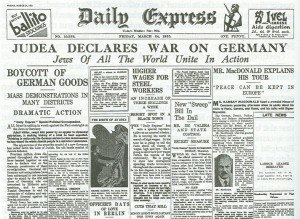 This documentary tells the tale that the victors still do not want you to know. Learn the terrible truth about the rape, torture, slavery, and mass murder inflicted upon the German people by the Allied victors of World Word II. This is the biggest cover-up in world history.

The words and images in this film are deeply disturbing, yet something Whites must confront.

In the judaized “mainstream” the sick celebration of “The Good War”, as the jew Studs Terkel called it, is increasingly supplanted by ever louder and more frequent hand-wringing about “The Holocaust”. This is no coincidence. The tragedy then was in the animus and violence White Americans, Britons and Russians, minds full of jewish poison, could be incited to direct against their racial cousins, the Germans, exactly because their leaders had properly identified the poison’s jewish source. The tragedy now is that so few Whites see it this way.

In this sense Hellstorm is a corrective, an antidote for the jewish poison which flows more freely now than ever before.

The film has it’s own website at http://www.hellstormdocumentary.com/. There is also a Hellstorm page at IMDb.

The film is based on the book Hellstorm: The Death of Nazi Germany, 1944-1947, by Thomas Goodrich.

Hunt and Goodrich have discussed the thoughts and intentions behind their work several times in the past nine months. They appeared together in October 2014 and May 2015 at Renegade Broadcasting.

They were also interviewed together in December 2014 with Adam and Garth at The Crazz Files, and again in May 2015 with Henrik Palmgren on Red Ice Radio, whose description of the conversation is:

We look at the relevance of unmasking the accepted history of WWII, a narrative that fundamentally excludes the truth about the horrific slaughter of tens of millions of innocent German civilians by Soviet communists. We talk about the massive amount of money that has been dumped into Israel as a result of the “crimes” for which Germany has been forced to pay reparations. Then, we consider why the success story of Hitler’s Nazi Germany was so dangerous to the rest of the world.

Hunt also provided a written Q&A with Dan Poole at Detroit Political Buzz, where he talked about how the war relates to White identity.

Some excepts from Goodrich’s books have been published under the title “Good War . . . Better Peace”, at The Occidental Observer.

Hunt and Goodrich on Spingola and Friends 05/14.