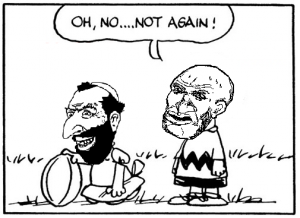 Based on what Conway says at Harvard, and what Forbes writes about the Kushner-orchestrated electoral college strategy, it is evident the Trump campaign did discreetly but deliberately go after the White vote. This is the big jew taboo team Trump violated. Thus team Clinton’s strategy was, for the entire campaign, to screech that this violation alone disqualified Trump. And they still are.

All the political insiders understand that dog whistling – saying what White voters want to hear – is taboo. They all know it is a jew-created, jew-enforced taboo. The Trump campaign took the attitude, “screw this, we love jews but we need these White votes, so we’re going to use dog whistles”. They did it only because they were determined to win, not because they genuinely intended to serve White political interests. Wanting to serve Whites as Whites would be unacceptably “racist”, on this point the Trump and Clinton teams agree.

In fact, the White voters never get what the dog whistling politicians promises – that’s the other, less recognized half of what dog whistling means. The first half, the pandering, the yids screech and flip their lids about. The second half, the betrayal, the jews only concern troll (as they did before the election) or cackle and gloat about (as they’re doing now).

The jewsmedia could have done more to counter Trump’s Rust Belt strategy. They could have put him on the spot about White genocide, forcing him to take a position on this specific “conspiracy theory”, as they did with David Duke and the KKK. They could have called attention to Trump’s old mentor, Roy “McCarthyite” Cohn, or his good friend, Jeffrey “underage pussy-grabber” Epstein. They didn’t. Why not? Because even though any of it would have likely diminished Trump in the eyes of White voters, it would have done so only by exposing just how thoroughly jewed Trump and the current regime is and always has been.

19 thoughts on “On Dog Whistling”