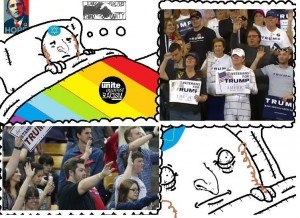 “It is a fascist gesture,” Foxman said. “He is smart enough — he always tells us how smart he is — to know the images that this evokes. Instead of asking his audience to pledge allegiance to the United States of America, which in itself would be a little bizarre, he’s asking them to swear allegiance to him.”

Despite Foxman’s fears, the ultimate taboo remains unbroken by Trump and the bulk of his White supporters, who have so far demonstrated little explicit recognition that jews are the driving force behind the “political correctness” they so despise. Indeed, though Trump knows the elites are thoroughly jewed and hostile to Whites, and could expect applause for speaking that truth, he has not done so and likely never will, because his family is very much a part of that jewed, hostile elite.

The irony is that jews are doing what Trump won’t. In reaction to his rise they have provided several pointed op-eds expressing their alienation and antipathy in explicit in racial terms, specifically against Whites. Here are three examples.

In other words, Trump’s base tends to be white, male, undereducated, and struggling financially. But that doesn’t necessarily explain Trump’s appeal. After all, if economic self-interest were their only motivation, such voters might well support Bernie Sanders, who blames big business and crony capitalism for the inequality that has suppressed wages and decimated the working class.

But put it all together, and you get a chunk of the electorate for whom the New America is hardly America at all. If you were to create a composite from the Pew stats, you’d have a white guy who has almost nothing in common with the kinds of characters in Master or Transparent — that is, brown, Jewish, nontraditional, college-educated, pluralistic. These shows don’t represent to him what’s new about America, but what’s wrong with America. And worse, the seeming success of these characters, he feels, comes at the expense of “real” Americans like him.

Trump’s real ideology is murky, but his targets are clear: Immigrants bring problems and take away jobs. Muslims represent the worst kind of threat: an internal one. America is corrupt and fallen, and by opening its doors to foreigners, tolerating difference, and insisting upon “political correctness,” it has suppressed the very people — that is, middle-class white families — who once made the country great.

Noam Chomsky, the renowned scholar and MIT professor emeritus, says that the rise of Donald Trump in American politics is, in part, fueled by deeply rooted fear and hopelessness that may be caused by an alarming spike in mortality rates for a generation of poorly educated whites.

“He’s evidently appealing to deep feelings of anger, fear, frustration, hopelessness, probably among sectors like those that are seeing an increase in mortality, something unheard of apart from war and catastrophe,” Chomsky told The Huffington Post in an interview on Thursday.

“[They] are sinking into hopelessness, despair and anger — not directed so much against the institutions that are the agents of the dissolution of their lives and world, but against those who are even more harshly victimized,” he said. “Signs are familiar, and here it does evoke some memories of the rise of European fascism.”

The Jews will run away from Trump because he scares them. Because his demagoguery is ominous, his willingness to slash and burn anyone standing in his way is disturbing, his tendency to incite his supporters against other ethnic groups from rapist Mexicans to terrorist Muslims, is a source of deep anxiety. Beneath the great wave of popular support for Trump one can make out with increasing clarity the dark undercurrents of rage and resentment and xenophobia that is often seen morphing into White supremacism and abhorrence of African Americans and then, on the outskirts, bad old hatred of the Jews. The allusions to Germany in the 1930’s are absurd, no doubt, but nonetheless surfacing with ever-increasing frequency.

49 thoughts on “In the News: Screeching Jews and Their Taboos”