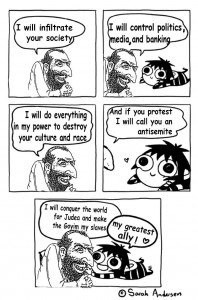 From Rome to Charlottesville, a statue is never just a statue, Steven Fine, The Times of Israel:

In modern times, the Arch of Titus became a symbol both of newfound Jewish rootedness in Europe and a place of pilgrimage where Jews, religious and not, could proclaim, “Titus you are gone, but we’re still here. Am Yisrael Chai.” Or as Freud put it, “The Jew survives it!” Where once Mussolini had celebrated the Arch as part of the heritage of fascism, Jews after the war assembled there to demand a Jewish state. Others imagined exploding the Arch and thus taking final retribution against Titus for his destruction of Jerusalem. Instead, the State of Israel took the Arch back unto itself, basing the design for its state symbol on the menorah carved into its surface.

I tell these stories of Paris, Rome and Jerusalem as parallels to debate that which has been intensified following the horrible events in Charlottesville.

The march of the neo-Nazis, the texts they recited, the torches and flags they carried, and the violence they instigated are essential to understanding who these people are and what values they see in the statue of Robert E. Lee in Charlottesville.

Reading this event, one can tease out their entire worldview — and it is horrifying.

The jew infiltrates, manipulates, exploits, and destroys it. And that requires keeping the goyim informed about the jew version of history, the jew narrative, per Freud and the American Jewish Committee. ‘The Jew Survives It’:

The story of the Jews is a series aimed at non-Jews. Elegantly filmed and directed, with a crisp script that succeeds in handling the historical facts with both sufficient rigor and appropriate emotion, it is tempting to believe that Schama had a specific type of non-Jew in mind as the series went into production: the academics, journalists, and artists whose eyebrows arch in irritation when the subjects of Zionism and Israel are raised at dinner parties.

From the outset, Schama, who is not a religious Jew, explains the persistence of Jewish identity through the lens of peoplehood. Investigating why modern Jews felt so intimately tied to their biblical forebears, he turns up at the London house where Sigmund Freud resided after fleeing the Nazi conquest of Vienna. Among the ancient artifacts collected by the author of Moses and Monotheism, a work in which the atheistic Freud essentially deconstructs the Bible, Schama finds a small menorah. “The Jews had given themselves an extraordinary possibility of enduring not just as a faith, but as a people, when everything else had been lost—land, kingdom, power,” he says. “That was the meaning of the menorah.”

Schama also displays a postcard Freud sent to a colleague while visiting Rome in 1913. The picture on the front showed the Arch of Titus, decorated with representations of the Romans plundering the Second Temple after the fall of Jerusalem. On the back, Freud had written simply: “The Jew survives it!”

Louis Beam: YES – The REAL Problem (WHITE People) – “there is no such thing as jewish domination”. Movement Critic = Rodney Martin.

Similar theme, other side of the pond. Same decade? John Tyndall – The White Problem.

Whites just have to stand tall, be positive, assert ourselves. It’s an appealing idea. But you can’t defend yourself from an enemy, much less defeat them, by pretending their actions don’t matter.

Beam explicitly acknowledged the jews’ existence, but only to dismiss their toxic influence. Tyndall felt that influence – the “race hate” laws the jews were already imposing on Britons – knew the source, censored himself. Pathology is caused by a pathogen.

Norm Macdonald on Bill Cosby. Good point. The worst thing is the harm, the virulence, the parasitism – not the hypocrisy.