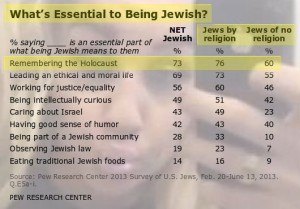 Nothing new or profound here, just another expression of the jewish narrative, specifically their holocaust narrative, a testimony to its utter pervasiveness. In this dominant, jewish view of history and morality, Germans and jews are distinct and unequal – it is the Germans, and Whites generally, who are less than the jews, with subordinate identity and interests.

Hitler and the national socialists offered German leadership to the German people, who naturally resented being ruled and harmed by jews. The jews have always thought less of the goyim. How many Germans were killed? How many Whites have been killed by Whites who have been tricked into war by the jews? The jews don’t care how many Whites died. All they care about is how many jews died. What’s more, they think that’s all anybody else should care about.

Last year’s Pew poll of jews reveals telling aspects of jewish identity. The table in the image above comes from the complete report. It indicates that the jews realize that the essence of being jewish is their persecution narrative, not religion.

The poll results were initially greeted by the jews in stereotypical fashion, as if the sky were falling on the jews. The truth is that the survey and their collective response highlight just how obsessesed jews are with their identity and interests, and those who aren’t are simply no longer counted as jews.

… a reanalysis of the data in last year’s Pew Forum survey … focus mainly on worrisome family patterns of non-Orthodox Jews. Fewer marry, those who marry have fewer children and those with children give them less Jewish education. The likely result — the signs are already visible — is that each successively younger age cohort is smaller than the one before, less Jewishly attached and less likely in turn to give their children a strong sense of Jewish identity.

The process produces degenerates such as Amanda Bynes, who melt into the White host.

Their calculations don’t include the Orthodox community, they note parenthetically, “because its overall family patterns are so different.”

“If Pew tells us anything,” Wertheimer and Cohen write, “it is this: judged by their ability to retain the allegiance of their young, foster a commitment to the group life of Jews at home and abroad, or even meet the elementary needs of survival, American Jews, whatever stories they continue to tell about themselves, no longer constitute a great community.”

Their solution: First of all, get more kids into Jewish day schools, which are depicted as the one sure fix for dissolving Jewish identity. They call it “tragic that day schools at every level have become largely the preserve of Orthodox Jews, with only small percentages of others choosing an immersive Jewish education for their children.”

This is common sense about education and its importance to group identity. The fact is that jews do teach their kids who they are, who their enemies are, to think of themselves as part of a group, to be loyal and committed to that group.

Another fact is that the jewiest jews have high birth rates and group consciousness:

It’s not that the Haredi streams are gaining popularity and attracting more Jews. Chabad, the Hasidic group that reaches out to non-Hasidic families, is the exception, so distinct that it’s listed as its own category with just 12,000 students, half of whom aren’t Hasidic. No, the streams of Judaism that are bursting at the seams are growing through high birthrates and strict self-segregation from everyone else.

How fast are they growing? Consider: Orthodox Jews comprise about 11% of the total American Jewish population of about 6 million, but they’re 27% of the 1 million children under 18. In New York City that figure is 60%. And nearly all that growth is in the black-hatted Hasidic and Yeshivish communities, not the Modern Orthodox.

Judaism probably isn’t at risk, but the worldly, liberal Jewry that emerged from the Enlightenment could be.

Jews in America have been whining about their persecution and impending demise for more than a hundred years. To understand why, we return again to Eric Goldstein’s book, The Price of Whiteness: Jews, Race, and American Identity, page 19:

The Uses of Race

Under the pressure of the shifting social boundaries of the 1870s, the language of race became an attractive vehicle for self-expression among American jews and was used liberally in the weekly jewish press, in popular novels and magazines, and in the pronouncements of jewish leaders. The great appeal of racial language was its unique ability to capture the strong attachment of jews to jewish peoplehood, a feeling heightened during a time when many of the familiar markers of jewishness were receding. Because jews could no longer count on clear social boundaries to set them off from non-jews, they looked to race as a transcendent means of understanding and expressing the ties that held them together as a group. In short, racial language helped them express their ongoing attachment to the social dimension of jewishness even as the social distinctiveness of jews began to weaken.

In similar fashion, racial language also allowed jews to maintain their self-image as a persecuted people as they rose on the economic ladder and attained an unprecedented level of social acceptance. For Cyrus Sulzburger, editor of the American Hebrew, jewish racial identity could not be understood apart from the history of jewish oppression, which had deeply shaped the group’s character and bound its members more closely together. The racial distinction between “Semite” and “Aryan” had been “more clearly marked by reason of the….persecution which we have undergone,” he explained. “The story of those persecutions form us a peculiar legacy which stirs the blood and touches the heart of every Hebrew in a way that it can stir none else.” Many jewish commentators of the period developed this theme by arguing that jews’ experiences with persecution had imbued them with a heightened morality, a clearer sense of justice, and a greater appreciation for the suffering of others. While the “Aryan has stood for pillage,” editorialized the American Hebrew in 1884, “the Semitic race has stood for peace.”

The opposition between White/Aryan versus jew/semite/hebrew is clear here. A century ago jews saw “the language of race” as good for the jews, as an “attractive vehicle” that captured “the strong attachment of jews to jewish peoplehood”. Ironically, as part of their infiltration and manipulation of White Americans, jews embraced their racial distinctiveness to help assert their moral authority. Yet even then, decades before Hitler or their “holocaust”, the foundation of jews’ identity and claims to superiority was their persecution narrative. Then, as now, the “persecuted” jew moralizes, lecturing his White “persecutor” about how to serve the best interests of the jews.

Skipping ahead to CHAPTER 4: “WHAT ARE WE?”: JEWISHNESS BETWEEN RACE AND RELIGION, page 108:

In defending endogamous marriage and opposing the government’s racial classification schemes, American Jews often relied on diversionary tactics. By trying to change the topic from race to religion, they aimed to protect their status as white Americans without having to directly deny their cherished “racial affinities.” As Simon Wolf’s appearance before the Immigration Commission demonstrated, however, such tactics fell flat in the face of direct questions about Jewish racial identity. This was precisely the problem American Jews confronted as questions began to arise among scholars and scientists about Jewish racial origins. In clarifying their place in American life, Jews had to have a coherent explanation as to how they fit into the larger story of human racial development. Yet the story of Jewish origins to which most jews of the period subscribed had significant potential to mark them as racial outsiders in white America.

During the nineteenth century the claim of “Semitic” origin had become something of a badge of honor for American Jews, allowing them to trace their heritage back to the dawn of civilization and take credit for laying the ethical foundations of Western society. By the early twentieth century, however, some Jews had become alarmed at the tendency of scientists, scholars, and popular commentators to attribute an African origin to the Semites.

Simon Wolf’s dissembling and its significance is better described in Henry Ford’s The International Jew. Wolf was a professional lobbyist for the jews who had been in contact with every president from Lincoln to Wilson.

Though dedication to the story of Semitic origins remained strong among many Jews, Jewish leaders did begin to see the importance of establishing their claim to whiteness scientifically. At the height of the controversy over immigrant classification in 1909, Jewish notables exchanged letters expressing concern about the increasing reliance of government policy on the work of race scientists, whom they feared were dangerously close to pronouncing the Jews a non-white race. While they had confidence that they could continue to dispute the racial classification of Jews on a political level, they were less certain of their ability to contest the authoritative voice of racial science. As Cyrus Adler of the American Jewish Committee wrote to his colleague Mayer Sulzburger, Jewish leaders needed to enlist the help of an anthropologist in order to get “a very strongly worded declaration as to the practical identity of the white race,” one that would presumably leave no doubt as to the whiteness of Jews.

The very title of Goldstein’s book, The Price of Whiteness, is another small lesson in jewish mentality. The implication is that jews paid in any way for their deliberate conspiracy to infiltrate, manipulate and exploit White Americans. The fact is that mistaking jews as “white” has cost Whites.