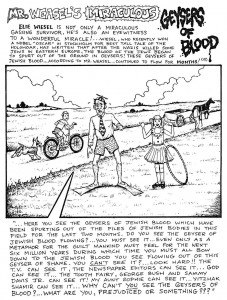 It’s overwrought, as jewish political rhetoric usually is, but this Haaretz op-ed gives a truer view of the extent and nature of jewish rule, and jewish consciousness of it, than is ordinarily visible in the mainstream jewsmedia. Beware: Republican Jews on the warpath:

Now it’s no longer a “crisis in the relationship” that they try to paper over; now it’s no longer just “tensions with the White House” that they’re making every effort to reduce in between meetings; now, it’s an open war with the United States. It’s Sheldon Adelson versus Barack Obama, and Israel is caught in the cross-fire.

After Vice President Joe Biden, our greatest friend over there, announced an unspecified trip abroad that will prevent him from being in Congress at the fateful hour, Republican Jewish organizations launched a campaign of intimidation against those lawmakers who had already announced their intent to skip the joint session: Their political fate will be bitter.

Nothing like this has ever happened in the history of nations.

God, save us from our Jews; we can handle the non-Jews ourselves. How easy it is to stir up the highest institutions of democratic America, and how difficult to bomb Iran’s underground nuclear facilities. Ask the heads of your intelligence agencies, or ours, and they’ll whisper it in secret.

From Israel, the land you love so much and are so far away from, we’d like to tell you American Jews, regardless of your opinions and party affiliations – all those of you who won’t openly wash your hands of these risky gambles – that our fate is in our own hands.

Don’t play with fire that will burn us alone, or perhaps you as well: Because of your silence, you’ll be accused of dual loyalty.

In these very moments, the protocols are being rewritten. Rich Jews are writing them in their own handwriting. They, in their wealth, are confirming with their own signatures what anti-Semites used to slander them with in days gone by: We, the elders of Zion, pull the strings of Congress, and the congressmen are nothing but marionettes who do our will. If they don’t understand our words, they’ll understand our threats. And if in the past, we ran the show from behind the scenes, now we’re doing it openly, from center stage. And if you forget our donations, the wellspring will run dry.

The advertisement quotes Wiesel as saying he plans to attend Netanyahu’s address ‘on the catastrophic danger of a nuclear Iran,’ with the author asking Obama and lawmakers: ‘Will you join me in hearing the case for keeping weapons from those who preach death to Israel and America?’

The high-profile ad campaign puts pressure on the White House and congressional Democrats to rethink their plans to skip the address.

Speaking to Reuters by phone, Boteach said: ‘There’s no personality more respected in the global Jewish community and few in the wider world than Elie Wiesel. He is a living prince of the Jewish people.’

‘He is the face of the murdered 6 million (Jews killed in the Holocaust). So I think that his view on the prime minister’s speech sounding the alarm as to the Iranian nuclear program carries a unique authority that transcends some of the political circus that has affected the speech,’ Boteach said.

Iran’s Plan for the Jews, Ancient and Present

Many centuries ago a wicked man in Persia named Haman advised: “There exists a nation scattered and dispersed among the others… It is not in our interest to tolerate them.”

And the order went out to all the provinces, to “annihilate, murder and destroy the Jews, young and old, children and women.”

Now Iran, modern Persia, has produced a new enemy. The Ayatollah Khamenei has been as clear as his predecessor in declaring his goal: “the annihilation and destruction” of Israel. He is bent on acquiring the weapons needed to make good on the deadly promise.

The disaster of ages past was averted, but the event is remembered in the holiday of Purim. On March 5th, Jewish children in synagogues around the world will shout down the name of Haman when it is pronounced in the Book of Esther. They understand a simple truth that at times eludes world leaders: When someone in power threatens your destruction, you must loudly condemn him.

On the day before Purim the Prime Minister of Israel will address Congress on the catastrophic danger of a nuclear Iran. I intend to be there. Should we not show our support for what might be the last clear warning before a terrible deal is struck? Santayana wrote that those who cannot remember history are condemned to repeat it. I believe that those who deny history – specifically the Holocaust – are determined to repeat it.

President Obama, Vice President Biden, distinguished members of Congress, I ask you – As one who has seen the enemies of the Jewish people make good on threats to exterminate us, how can I remain silent?

As Queen Esther said when addressing her King: “How can I behold the destruction of my people?”

I plead with you to put aside the politics that have obscured the critical decisions to be made. Surely it is within your power to find a solution that will permit Israel’s Prime Minister to deliver his urgent message.

Will you join me in hearing the case for keeping weapons from those who preach death to Israel and America?

In traditional Jewish families we close the Sabbath with the lighting of the Havdalah candle and a quote from the Book of Esther retelling how danger was replaced by light and happiness, and the blessing: “And so may it be for us.”

Wiesel is demonstrating how the jewish narrative, from the Purim tale to the “6 million” tale, is used as a weapon. Specifically he is using it to instigate a war which will be waged by others for the benefit of jews. He’s being especially brazen (and typically jewish) to invoke Purim, in effect announcing what he’s doing, though in a way that virtually none of the ignorant goyim will understand. As I noted in Jewish Crypsis – Religion – Part 4:

In a nutshell Purim is the celebration of the triumph of jews over their enemies. Specifically, it is a victory achieved by means of deception, seduction and exploitation of others – whereby a single wiley crypto-jewess [Esther] manipulates one group of goyim into warring on another group of goyim in the service of jewish interests. The moral of the story and righteousness of it all rests upon the jewish license noted above: proactively exterminating “mortal dangers” “by any means necessary”.

These three things [Purim, Kol Nidre and Moser] have little or nothing to do with God, or serving God, unless God is understood as the people who are being served, the jews themselves.

When Wiesel concludes by referring to, “how danger was replaced by light and happiness”, he and every jew knows that this means getting goyim to slaughter goyim for the jews. Like World War II. They also know that most goyim don’t know. We must change this.