MakeApp Shows What Women Look Like Without Makeup, by Madison Malone Kircher:

Clearly, my gelled brows and tinted lips were intended to con some schmuck of the opposite sex into thinking I am extremely good-looking and then make him buy me six iPhone X’s.

Women and jews, and particularly jewesses, go to great expense to hide what they are. The effort to disguise themselves cosmetically extends beyond makeup into nose jobs and name changes. This effort does not change their essence, but instead ironically reveals it. The mask makes plain their bad faith, their willingness to deceive and defraud. And their lie revealed, they inevitably shift blame to the “schmuck” unmasking them. 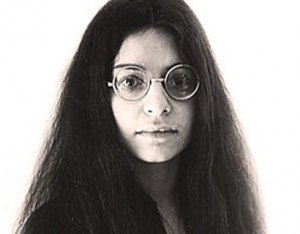 Jewish female jealousy of the shiksa trophy wife isn’t as strong a factor as Jewish daughters’ rage at Orthodox Jewry.

Shulamith Firestone is a classic Jewish feminist head case who projected her daddy-rage on America and persuaded more civilized gentile women that they were oppressed.

Think of her famous book “The Dialectic of Sex” as “Yentl” with a paranoid schizophrenic edge projected large on Christian America … and gentile America is still paying a huge feminist price for Shulie’s daddy issues. Not just jealous Jewish ex-wives, but apoplectic Jewish daughters, too. Pity they projected their rage on us.

Big Bill linked the obituary, Death of a Revolutionary, by Susan Faludi, The New Yorker, 15 April 2013:

Shulamith Firestone helped to create a new society. But she couldn’t live in it.

There was no food in the apartment, and one theory is that Firestone starved, though no autopsy was conducted, by preference of her Orthodox Jewish family. Such a solitary demise would have been unimaginable to anyone who knew Firestone in the late nineteen-sixties, when she was at the epicenter of the radical-feminist movement

Most of all, Firestone is remembered for “The Dialectic of Sex,” a book that she wrote in a fervor, in a matter of months.

In some two hundred pages, “Dialectic” reinterpreted Marx, Engels, and Freud to make a case that a “sexual class system” ran deeper than any other social or economic divide. The traditional family structure, Firestone argued, was at the core of women’s oppression. “Unless revolution uproots the basic social organization, the biological family—the vinculum through which the psychology of power can always be smuggled—the tapeworm of exploitation will never be annihilated,” Firestone wrote. She elaborated, with characteristic bluntness: “Pregnancy is barbaric”; childbirth is “like shitting a pumpkin”; and childhood is “a supervised nightmare.” She understood that such statements were unlikely to be welcomed—especially, perhaps, by other women. “This is painful,” she warned on the book’s first page, because “no matter how many levels of consciousness one reaches, the problem always goes deeper.” She went on:

Feminists have to question, not just all of Western culture, but the organization of culture itself, and further, even the very organization of nature. Many women give up in despair: if that’s how deep it goes they don’t want to know.

But going to the roots of inequality, Firestone believed, was what set radical feminism apart from the mainstream movement: “The end goal of feminist revolution must be, unlike that of the first feminist movement, not just the elimination of male privilege but of the sex distinction itself: genital difference between human beings would no longer matter culturally.”

Emphasis on Western and privilege in original.

Firestone was buried, in a traditional Orthodox funeral, in a Long Island cemetery, where her maternal grandparents are interred. Ten male relatives made up a minyan. None of her feminist comrades were invited. “At the end of the day, the old-time religion asserted itself,” [Firestone’s sister] Tirzah said. [Her brother] Ezra gave a eulogy. [words words words] Then he lamented Shulamith’s “tragic” failure to make a “good marriage” and have children “who would be devoted to her.”

When Tirzah’s turn came to give a eulogy, she addressed Ezra. “I said to him, ‘Excuse me, but with all due respect, Shulie was a model for Jewish women and girls everywhere, for women and girls everywhere. She had children—she influenced thousands of women to have new thoughts, to lead new lives. I am who I am, and a lot of women are who they are, because of Shulie.’ ”

In the end the traditional jewish obsession with the best interests of jews comes into view. While Firestone’s siblings agree on that metric, they differ on the scope and context to apply it. Her brother, thinking narrowly, considered his sister a personal failure. Her sister, thinking more subtly, regarded the loathsome harmful influence (the brunt of which was aimed at and borne by Whites) a model for good jewess soldiers everywhere to emulate.