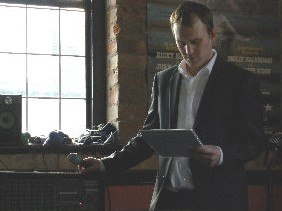 The team at the BM Sunwheel Office were saddened to hear of the death of West Midlands racial Nationalist and activist Paul Hickman. Paul Hickman was the broadcaster behind the on-line radio ‘Voice of Albion’ and operated on the internet as ‘Birmingham Nationalist’. Ruthlessly hounded by self-styled anti-fascists, Paul lost his job and struggled to find work, his political activism also drew on to him the unwanted attentions of the State and its agencies. From what little information coming to us here, we are led to believe that Paul Hickman took his own life. A sad situation for someone still in their thirties and a loss to British Nationalism.

Also, from the sidebar at Renegade Broadcasting:

After 2 years of restrictive bail for posting non-PC stickers, being harassed and doxed by antifa and losing his employment, former Renegade host Paul Hickman took his life. RIP.

This is sad news. I first spoke with Paul Hickman a little over four years ago when he was starting his program Voice of Albion at the White network. I had the pleasure of joining him on air on two occasions, in February and April of 2014.

I did not know Paul well, but had hoped to meet him in person someday. He helped educate me in several ways. He was a somber and perceptive man. He could clearly see the horror unfolding in Britain specifically but also for the White race more generally. He had been increasingly openly active in the British National Party, but by 2014 had became dissatisfied with the leadership of Nick Griffin. In response Paul became more radical, in the best possible sense, shifting his attention and support to British Movement and National Action.

At tWn Paul focused mainly on the life and work of BNP founder John Tyndall, whom he clearly held in high esteem. He moved his program to Renegade in April of 2014 and while there interviewed a variety of bright contemporary European nationalists. Paul’s conversation with Simon Sheppard is a favorite.

At Renegade Paul also produced a three-part series on Arnold Leese’s book My Irrelevant Defence being Meditations Inside Gaol and Out on Jewish Ritual Murder, originally published in 1938. Leese was a brilliant writer, a learned student of the jew problem, not nearly as well known as he should be. I recommend Paul’s reading and discussion of Leese’s book as a way to get to know both of them.

Paul Hickman was an intelligent and articulate man, an activist who tried to help his nation and his race, at great cost to himself. He will be missed.