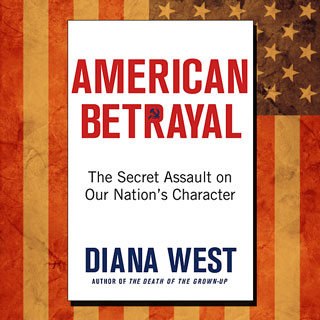 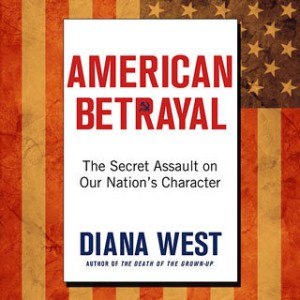 A new book is sparking controversy amongst judeo-cons. Laura Wood calls it The War over “American Betrayal”. Baron Bodissey describes it as Cordon Sanitaire: FAIL.

Jewess Diana West’s book, American Betrayal, is subtitled “The Secret Assault on Our Nation’s Character”. The synopsis at Amazon begins:

In The Death of the Grown-Up, Diana West diagnosed the demise of Western civilization by looking at its chief symptom: our inability to become adults who render judgments of right and wrong. In American Betrayal, West digs deeper to discover the root of this malaise and uncovers a body of lies that Americans have been led to regard as the near-sacred history of World War II and its Cold War aftermath.

The argument began when a fellow “conservative” jew, Ron Radosh, wrote McCarthy On Steroids, criticizing West’s book. The thrust of it was to accuse West of conspiracy theorizing, to compare her to judeo-communist bugbears Senator Joseph McCarthy and the John Birch Society, and to pick nits about whether this or that individual was actually a Soviet spy. All very jewish in character.

Radosh’s primary concern comes through in his description of West’s thesis:

She argues that during the New Deal the United States was an occupied power, its government controlled by Kremlin agents who had infiltrated the Roosevelt administration and subverted it. Like McCarthy, whom West believes got everything correct, she believes a conspiracy was at work that effectively enabled the Soviets to be the sole victors in World War II and shape American policies in the postwar world.

Writing sixty years later, she claims that the evidence that has come to light in the interim not only vindicates McCarthy’s claims but goes well beyond anything he imagined. Throughout American Betrayal, West uses the terms “occupied” and “controlled” to describe the influence the Soviet Union exerted over U.S. policy through its agents and spies. She believes she has exposed “the Communist-agent-occupation of the U.S. government” during the Roosevelt and Truman eras, and that her discoveries add up to a Soviet-controlled American government that conspired to strengthen Russia throughout World War II at the expense of American interests, marginalize anti-Communist Germans, and deliver the crucial material for the Atomic Bomb to Stalin and his henchmen. It also conspired to cover up the betrayal. In West’s summation: “The Roosevelt administration [was] penetrated, fooled, subverted, in effect hijacked by Soviet agents… and engaged in a “‘sell-out’ to Stalin” that “conspirators of silence on the Left…would bury for as long as possible, desperately throwing mud over it and anyone who wanted the sun to shine in.” According to West, it was only because Washington was “Communist-occupied” that the United States aligned itself with the Soviet Union against Nazi Germany.

West has evidently seduced conservatives who are justifiably appalled by the left’s rewriting of history, its denials that Communists ever posed a threat, and its claim that Communist infiltration was a destructive myth created by witch-hunters intent on suppressing dissent. For these readers, West’s credibility derives from her aggressive counter vision.

In her effort to paint the Roosevelt administration as a puppet of Soviet intelligence, she argues that towards the end of the war, the American government turned down the opportunity to arm German soldiers willing to form a new army to go to war against the USSR. American leaders were so pro-Soviet, in other words, that they missed one final opportunity to halt the Red Army’s advance into Eastern Europe, thereby delivering these countries to Stalin’s tender mercies and precipitating the Cold War.

West tries to explain the Anglo-American war-time alliance with the Soviets and subsequent setbacks and concessions during the Cold War as a result of infiltration, occupation and betrayal by communists. McCarthy made a similar argument in America’s Retreat From Victory, published in 1951. He decried a series of apparently deliberate missteps, from the point of view of an anti-communist patriot at least, and pinned most of the blame on George Marshall.

Radosh, spooked by this image of Western leaders as puppets, quotes Laurence Rees in defense of the no-betrayal-required explanation he prefers:

If the Western allies had fought alongside the Germans and then reached some kind of uneasy peace with the Soviets — who would, of course, have felt betrayed by the West, probably fueling a future conflict — who would then have disarmed the German army? Germany would have been unoccupied by the Western Allies and still immensely powerful. So, thankfully, Roosevelt filed Earle’s plan in the bin.

This is the consensus of every historian of the war. The decision not to consider an entente with Hitler’s army against Stalin was a clear-headed affirmation of U.S. interests, not a betrayal, as West virtually screams.

West is trying to “diagnose the demise of the West”, to explain the “assault” Western rulers have been making on their “own nations” since the war. West’s thesis is that the enemy then was communists and traitors, and furthermore, that the enemy today remains “leftist” traitors. Radosh show little sign that any of this concerns him. His fear is that West puts too much emphasis on betrayal. He doesn’t like where this line of thinking leads.

Where it leads is to an examination of interests and who/whom. It invites one to wonder who constitutes “our nation”, who has been harming us, and why.

It helps to know that in the decades before the war the jewish role in the bolshevist revolution and consequent bloodbath was openly acknowledged and discussed. Powerful White Americans regarded jewish infiltration and betrayal a threat to US interests. I doubt West mentions any of this. She’d likely join Radosh in demonizing and pathologizing anyone who cites this history, as I do here, as evidence that the larger threat was jews and judaization.

Yet the jewish infiltration and occupation of European societies and governments did in fact proceed, in fits and starts, in various places, at various times, with the aid of a variety of traitors. Communism was but one vehicle. Today the jewish dominance of finance, media and academia amounts to hegemony over “the West”. It is the tremendous harm their rule has caused, “the demise of the West”, which compels these “conservative” jews to argue. They’re arguing about how to explain it in a way that doesn’t implicate their tribe.

Whereas West thinks it’s safe enough to finger communists and leftists, Radosh thinks the evil “nazi” consensus suffices. The irony is that even a contemporary leftist traitor speaks more clearly to the consequences of jewish power and influence.