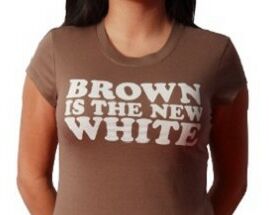 I just returned from a brief trip to scout out a new home in a different state. A friend asked how it went. I said, "It was great. It’s still America there." He laughed. It isn’t funny.

My family and I will be uprooting our lives and leaving Aztlan soon. We don’t know where exactly we’ll end up, but for sure it won’t be anywhere in CA, AZ, NM, TX, NV, or CO. We don’t want to live under Ladeeenyo rule. Does that make me a racist?

I don’t give a fuck.

What I know is we’re tired of the endless Ladeeenyo demands for special treatment for "their people". They talk and act like a harmless oppressed minority even though they are more and more clearly growing into a spiteful vindictive majority. Like a horde of locusts they’ve descended on my once sleepy American town and are busily transforming it into a crowded, dangerous, Tijuana-like shithole of a slum. The value of my property is evaporating even while the values in more distant "nice" neighborhoods continue to climb. SoCal is balkanizing into ever more sharply divided ethnic enclaves, and my house is on the wrong side of the divide.

Our schools, once among the best in the state, now rate amongst the worst. Their funds and a ridiculous amount of teacher time are consumed by more and more kids who speak no English. Why don’t they put all the ESL kids in their own class? Because then we wouldn’t get to celebrate diversity together. One painfully bilingual word at a time.

The local government’s every attempt to pass ordinances that might reduce the massive illegal population have been met by loud-mouthed bigots screaming for "rights" for "their people". As in Hazleton, MALDEF and the ACLU lawyers happily work pro bono to keep the ordinances from going into effect. Their absurd argument: only the federal government can enforce immigration law. Wonderful. When an illegal alien hurts someone they love I dearly hope that argument haunts them.

So my once lovely town is going down the toilet. As is the rest of southern CA, and the rest of Aztlan. El Presidente Bush will do nothing to stop the invasion. He’s the one who threw it into high gear.

We don’t need a fence. We don’t need 20 million handcuffs. What we need is a president who feels enough loyalty to America to actually defend it. We can fantasize about something like Eisenhower’s Operation Wetback. Perhaps something better. With a loyal American president we could surely work out the details and solve our problems. Without a loyal American president none of the details matter.

Since the invasion will surely continue I can see only one course of action. Dunkirk it out of here. To find other people like myself and my family. To find some place that is still America, where American traditions and culture are still valued and celebrated. Where American history and heroes haven’t been replaced with Mexican history and heroes, or some equally thin gruel of multicultural utopian double-talk. Where there are no gangs and the police and government are not controlled by ethnocentric bigots who brazenly do everything they can to benefit their own kind at the expense of everyone else.

One of America’s greatest strengths has always been taking in immigrants from cultures around the world, and assimilating them into our country as Americans. By being citizens of the U.S. we are Americans first, and only, in our national loyalties.

This is totally opposed by MEChA for the hordes of illegal immigrants pouring across our borders, to whom they say:

"Chicano is our identity; it defines who we are as people. It rejects the notion that we…should assimilate into the Anglo-American melting pot…Aztlan was the legendary homeland of the Aztecas … It became synonymous with the vast territories of the Southwest, brutally stolen from a Mexican people marginalized and betrayed by the hostile custodians of the Manifest Destiny." (Statement on University of Oregon MEChA Website, Jan. 3, 2006)

MEChA isn’t at all shy about their goals, or their views of other races. Their founding principles are contained in these words in "El Plan Espiritual de Aztlan" (The Spiritual Plan for Aztlan):

"In the spirit of a new people that is conscious not only of its proud historical heritage but also of the brutal gringo invasion of our territories, we, the Chicano inhabitants and civilizers of the northern land of Aztlan from whence came our forefathers, reclaiming the land of their birth and consecrating the determination of our people of the sun, declare that the call of our blood is our power, our responsibility, and our inevitable destiny. … Aztlan belongs to those who plant the seeds, water the fields, and gather the crops and not to the foreign Europeans. … We are a bronze people with a bronze culture. Before the world, before all of North America, before all our brothers in the bronze continent, we are a nation, we are a union of free pueblos, we are Aztlan. For La Raza todo. Fuera de La Raza nada."

That closing two-sentence motto is chilling to everyone who values equal rights for all. It says: "For The Race everything. Outside The Race, nothing."

I’ve had recent conversations with a few other local Anglo/Guero/Pilgrims and mentioned that I’m leaving.

"Because we don’t want to live in Aztlan", I say.

"Aztlan? What’s that?" When I explain they screw up their face. "What? That’s not true. You believe in conspiracy theories? What are you, an ignorant racist?"

It’s easy to see how they don’t know about Aztlan, or MEChA, or how CA Lt Governor Cruz Bustamonte and LA Mayor Tony Villaraigosa and untold numbers of other powerful Ladeeenyos belong to it and support its reconquista agenda. Because our fair and balanced ever vigilant watchdog media finds such facts unworthy of note.

Why is that? I know. Because Aztlan is a conspiracy theory. And I’m a racist for believing it. Unfortunately for me that doesn’t mean the reconquista isn’t really happening.

So my family and I, like so many other despicable closet racists before us and so many more sure to come, are looking to move to a "nice place" with "good schools" and "friendly people". If such a place still exists.

If we were Ladeeenyos the media would spew endless epic verse about our plight, how our family is "migrating" and being "torn apart" by "oppressive racists" as we "seek a better life". Instead, the invasion has cost us dearly and it will cost us even more now as we try to get back to the quality of life we once had. And for noticing this injustice we are labeled filthy racists.

The sudden realization that we are only one of many families faced with this dim reality brings new understanding to headlines that I previously perceived as nothing more than disjoint babble. What I see is that a large fraction of our societal woes result directly from massive immigration. And a large fraction of our supposedly booming economy (notably real estate and construction) arises from the senseless displacement caused by people fleeing those societal woes.

Please read this if you’re still convinced that immigration is wonderful and necessary. The problem is not that nobody sees what is happening. The problem is that not enough people see. Or too many are afraid of being called racist. That’s changing, but it’s too little too late to save SoCal.