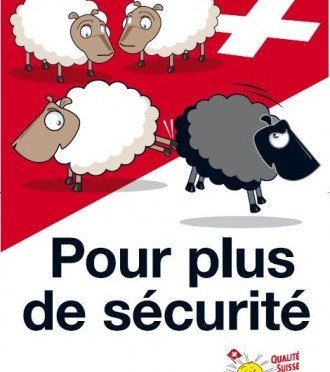 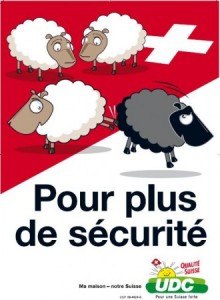 The poster is, according to the United Nations, the sinister symbol of the rise of a new racism and xenophobia in the heart of one of the world’s oldest independent democracies.

A worrying new extremism is on the rise. For the poster – which bears the slogan “For More Security” – is not the work of a fringe neo-Nazi group. It has been conceived – and plastered on to billboards, into newspapers and posted to every home in a direct mailshot – by the Swiss People’s Party (the Schweizerische Volkspartei or SVP) which has the largest number of seats in the Swiss parliament and is a member of the country’s coalition government.

Racism, xenophobia, and extremism! According to the UN! Oh my! The tone of the article is so overwrought I could hardly keep from laughing. To the author, the idea that a nation and its people might have the temerity to act in their own self interest is obviously heretical – why it completely violates multicultural dogma!

The PC police have terrorized us for decades with their grim tone and scary names. Sippenhaft is something the Nazis did, huh? Well then, maybe they had some other good ideas. Give the scaremongering a rest you liberal twits. Some of us are wise to your treasonous tricks and we’re conscious of a real threat. You invite barbarian invaders to walk among us and then propose we simply act natural, not panic, and hand over everything with a smile? Jam it.

This article is a very long but informative read. What it makes clear, from a Muslim point of view, is why the Swiss are smart not to follow the path of the Dutch, the path to suicide the preachers of multiculturalism and diversity urge us all to follow.

Update, 15 Sept 2007: Here’s the homepage of the Schweizerische Volkspartei, which links to some Swiss alien crime statistics:

From the Independent article:

* More than 20 per cent of the Swiss population, and 25 per cent of its workforce, is non-naturalised.

The aliens, who are only one fifth of the population, are committing more than half the crime!

Wouldn’t it be wonderful if the US had a political party, or even one candidate for president, who would face the similar unpleasant reality we have here? Google state most wanted, or sheriff most wanted for a sobering illustration of that problem (thanks to Katie’s Dad 2.0).