Power to the Swiss people and the Schweizerische Volkspartei (SVP). The image caption reads, “Swiss quality, the middle class’ party”.

The government must now draft a supporting law on the ban, a process that could take at least a year and could put Switzerland in breach of international conventions on human rights.

Apparently even the mildest, most indirect attempts to resist genocidal levels of immigration can put Whites in breach of “international conventions on human rights”.

Of 150 mosques or prayer rooms in Switzerland, only 4 have minarets, and only 2 more minarets are planned. None conduct the call to prayer. There are about 400,000 Muslims in a population of some 7.5 million people. Close to 90 percent of Muslims in Switzerland are from Kosovo and Turkey, and most do not adhere to the codes of dress and conduct associated with conservative Muslim countries like Saudi Arabia, said Manon Schick, a spokeswoman for Amnesty International in Switzerland.

Nothing to see here. Only 5 percent of Switzerland’s population is muslim, close to 100 percent of them cultural and genetic aliens.

“Most painful for us is not the minaret ban, but the symbol sent by this vote,” said Farhad Afshar, who runs the Coordination of Islamic Organizations in Switzerland. “Muslims do not feel accepted as a religious community.”

The kosovars, turks, and other muslims can go home, feel accepted, and build as many minarets as they like. Most painful for the Swiss is that if “international human rights” prevail it’s only a matter of time before the Swiss will be entirely dispossessed of their one and only homeland.

To the consternation of anti-White internationalists resistance is beginning to come not just from the “nativist”, “xenophobic”, “racist”, “nazi” SVP – but also from leftist feminists. 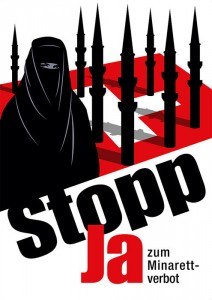 A right-wing campaign to outlaw minarets on mosques in a referendum being held in Switzerland today has received an unlikely boost from radical feminists arguing that the tower-like structures are “male power symbols” and reminders of Islam’s oppression of women.

A “stop the minarets” campaign has provoked ferment in the land of Heidi, where women are more likely than men to vote for the ban after warnings from prominent feminists that Islam threatens their rights.

This resistance is “right-wing” with “an unlikely boost” only if seen from an anti-White internationalist cheerleading point of view. Media bias isn’t “liberal”, it’s anti-White.

Socialist politicians have been furious to see icons of the left joining what is regarded as an anti-immigrant campaign by the populist Swiss People’s party, the biggest group in parliament.

One of them, Julia Onken, warned that failure to ban minarets would be “a signal of the state’s acceptance of the oppression of women”. She has sent out 4,000 emails attacking Muslims who condone forced marriage, honour killings and beating women.

Normal, healthy people don’t like being replaced by aliens who look, think, and act alien, obliterating their precious homeland and traditions before their very eyes, forever. Apparently, neither do radical feminists.

Swiss business is horrified. There are fears of a reaction against Swiss products similar to the one suffered by Denmark over the publication of cartoons depicting the prophet Muhammad in 2005.

“The brand ‘Swiss’ must continue to represent values such as openness, pluralism and freedom of religion,” said Hanspeter Rentsch, a member of the board of Swatch, the watchmaker. 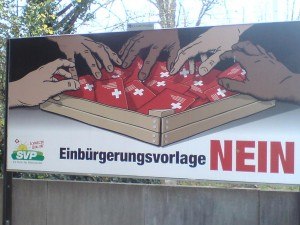 It’s more horrorifying that Swiss businessmen feel free to favor “brand ‘Swiss'” over people Swiss. The irony is that openness and pluralism will eventually destroy the Swiss and all their “brands”, and the freedom to build minarets will ultimately be very, very bad for business.

Can you guess who else thinks openness, pluralism and freedom of religion are more important than Swiss self-determination?

Push to ban minarets in Switzerland a ‘threat’:

Switzerland’s biggest Jewish groups said Wednesday that a far-right push to ban the construction of minarets here was a “threat” to religious harmony and hindered the integration of Muslims.

– The referendum infringes religious freedom, a concept enshrined in the constitution – said the Swiss Federation of Jewish Communities and the Platform of Liberal Jews in Switzerland in a statement.

It – also poses a threat to peaceful relations between the religions and inhibits the integration endeavours of Muslims in Switzerland – they added. 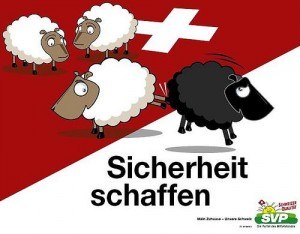 This is pure double-talk. Immigration brings the threat to harmony. The Swiss citizenry, who to the extent they’ve been informed and consulted have expressed their disfavor for immigration, muslim or otherwise, and should not be forced to suffer it, whether the immigrants wish to “integrate” with them or not. It is their very existence which is being infringed. What gives “jewish communities”, who have not integrated after more than two millenia among Europeans, any standing to lecture anyone about immigration or integration? They consider themselves jews first, not Swiss, so they can STFU or move to israel and lecture their own tribe about immigration and integration.

The two Jewish groups said they – take seriously the fears of the population that extremist ideas could be disseminated in Switzerland. –

– But banning minarets is no solution — it only creates in Muslims in Switzerland a sense of alienation and discrimination – they said.

If creating a sense of alienation is the concern then surely the alienation the native Swiss feel at the sight of minarets in their homeland trumps the senses of migrant muslims and jews, who after all are only guests. What the Swiss and all other Whites should take seriously is how jews and muslims do not hesitate to “discriminate”, i.e. identify with and advocate in favor of their own groups, even as they pathologize Whites for any attempt to do so. 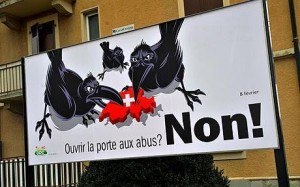 It’s true that banning minarets is no solution. Deporting aliens would be better, but even that wouldn’t solve the problem. The problem is “international human rights”. What horrifies Swiss business is the precedent for internationalist punishment that has already been set by organized jewry. See The Jewish Declaration of War on Nazi Germany: The Economic Boycott of 1933.

Why would any normal, healthy people want to see the dysfunctional middle east recreated inside their country’s borders? In part because we’re constantly told, as we’re reminded here in this case, that it harms peaceful relations, harmony, and integration to see it this way. And in part because if we set that concern aside and persist then we’re threatened – all the double-talk about peaceful relations, harmony, and integration aside – with open war.

Some pundits characterize what’s happening to every White country, and only White countries, as “suicide”, or “self-destruction” caused by “liberalism”. This story of resistance from Switzerland, among others, puts the lie to that poisonous, blame-shifting meme.

Banning minarets is treating symptoms, not the disease.

The disease is the idea, which produced its most fateful results during the Enlightenment in the service of emancipating jews, that Whites, and only Whites, must not “discriminate” against “minorities”. Since this meme took root it has been fed and twisted to genocidal proportions. Whites everywhere now live under a regime which subsidizes, supports, and even directly imposes “discrimination” against Whites, defending the interests of interloping aliens over the interests of the native-born citizenry.

The banning of minarets by popular vote strikes only obliquely at this idea, but it is a blow against the disease itself. Organized jewry roundly condemns it for exactly this reason. “Liberal” feminists played a prominent part in the minaret ban, putting the lie to the corollary meme, pimped constantly by faux-White pro-jews and others, that “suicidal” White “liberalism” is to blame for all that ills us. Even “liberals”, it turns out, resist when their “suicide” becomes too blatant. The genocide is inflicted in the name of “liberal” “non-discrimination” in name but not in fact, and it is inflicted by “the international community” – which means the plutocrats, their media, their jet-setting cosmopolitan courtiers, jewish groups, muslim groups, and the treaonous costume clowns who serve their interests in their governments.

“Treating symptoms” is more fairly applied to much of what conservatives do here in the US – for example, to their focus on the transfer of wealth via taxes or healthcare, never identifying who the wealth is transferred from or to; or to the “culture war”, never identifying who’s at war with whom.

41 thoughts on “Switzerland Minus Minarets”