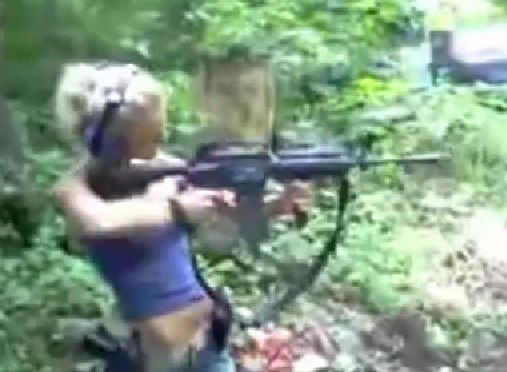 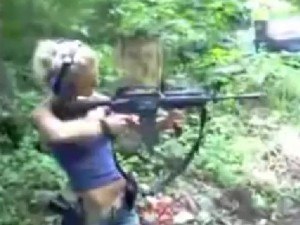 Youtube hosts a broad selection of gun-related videos. The titilating sub-genre sandwiched in the middle of the video above is probably among the more popular. In fact, the gun video genre as a whole represents just the tip of an enormously popular and vibrant American gun subculture. The Constitution-reading, law-abiding portion of this subculture is also overwhelmingly White. Even so, it’s hard to find videos like this on YouTube. This video doesn’t just titilate. It expresses a pro-White political position.

The black man is alarmed because he sees that, when the Schumer Hits The Fan, Whites will not only be well armed but better prepared. The contrasting sights and sounds – vulgar threat, bonny poise – stir deep, primal emotions. The women shooters don’t have to say a word. Any White man with a properly functioning limbic system gets this message. As disgust and tingle pass, there is anger. White women shouldn’t need to take up arms. Something is wrong in a society where they see such a need. Racial pride wells up, however, with the recognition that we do prepare well to face challenges, in whatever form they come.

The 1960s-era Wally Butterworth voice-over at the end adds historic context. What has gone wrong started going wrong a long time ago. The Butterworth commentary is a reminder that for decades now the struggle for cultural and political power in the US, for it’s identity, hasn’t primarily been with blacks, but with jews. Neither he nor Rockwell tried to fool themselves or others into thinking that someday blacks would run America. Like George Lincoln Rockwell, Butterworth rightly made a point of calling upon Christian Whites to defend the country they had built. Today it is only more obvious that the assault is on White interests as a race, not constrained by borders or creed.