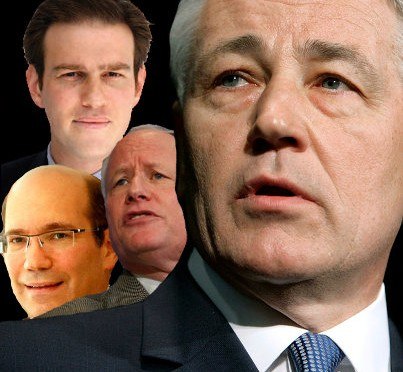 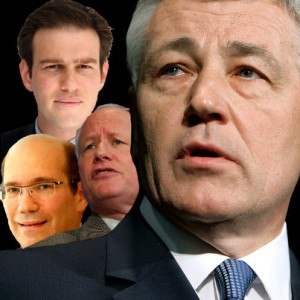 President Obama on Monday chose Chuck Hagel to lead the Pentagon, inviting a confirmation brawl over a troubling nominee. The Senate should oblige. The Hagel hearings are an opportunity to have the debate over Mr. Obama’s policies and a growing world disorder that we didn’t have in the election campaign.

The suggestion that the Senate has more of a say about US policy than the jewish lobby is quaint. After nearly a month in which one or more of the terms “jewish lobby”, “Israel lobby”, and “Israel” appeared in nearly every mainstream media op-ed about Hagel, this WSJ report is most conspicuous for not mentioning any at all, even if only to acknowledge what has already transpired. It is indicative of an overall shift in the debate.

But no one questions Mr. Hagel’s patriotism and military service. What matters at the top of the Pentagon, at this moment in history, is how he would deal with today’s growing security threats amid Mr. Obama’s desire to withdraw the U.S. from its traditional role of world leadership.

Only now are questions beside what’s best for Israel being brought to the fore. The debate so far has been primarily between jews, their main question being whether Hagel will be good for their ethnostate. That question is still not entirely settled. What has been settled is that this is the primary question. It’s not about what should matter most to the US Department of Defense, which many Americans still like to imagine has something to do with the defense of the United States. Likewise, it’s not about whether the US should “lead the world”, which is just a sick and dishonest way of describing the killing and dying US soldiers have been and will continue doing to keep the world safe for jews.

WSJ’s Brett Stephens is the journalist-warrior jew who set the jew-centric tone of the subsequent debate with his 17 Dec 2012 op-ed, Chuck Hagel’s Jewish Problem. Now he’s making the case that the question is Chuck Hagel’s Courage, but still can’t help give away the game:

But give Mr. Hagel this: When it comes to expressing himself about Israel, its enemies, and the influence of the so-called Jewish lobby, he has been nothing if not consistent and outspoken. Maybe that’s political courage. Or maybe it’s a mental twitch, the kind you can’t quite help. The confirmation process should be illuminating.

It has already been illuminating. It will be even moreso if the confirmation process makes more jews twitch like Stephens.

Not every jew has decided to shift gears yet. Some are still twitching in response to Stephens initial hit piece. In The tarring of Chuck Hagel published by The Washington Post yesterday, Richard Cohen writes:

I thought the day had long passed when a skeptical attitude toward this or that Israeli policy would trigger charges of anti-Semitism. The accusation is so powerful — so freighted with images of the Holocaust — that it tends to silence all but the bravest or the most foolish. Israeli policy of late has been denounced by some steadfast champions of the Jewish state — the New York Times’ Thomas Friedman or the New Republic’s Leon Wieseltier, for example — so being caustically critical is hardly evidence of anti-Semitism. Rather, it can be a sign of good judgment, not to mention a caring regard for the aspirations of Zionism.

The article that implied Hagel was a touch anti-Semitic was headlined “Chuck Hagel’s Jewish Problem” and suggested that Hagel’s statement that “the Jewish lobby intimidates a lot of people up here” in Congress had “the odor” of prejudice. A PC sort of guy might have put things more delicately: If there is an odor here, however, it is not the rancid stench of anti-Semitism but instead of character assassination.

This is typical of what passes for “caustic criticism” in jewish minds – jews gnashing their teeth at other jews about who is the better jew. Two jews might appear to be arguing vociferously, but note how their language never gets more venomous than when they talk about “anti-semitism”, their common cause eventually bubbling to the top, overriding all others.

The sad reality that contemporary political discourse is so dominated by jews and their concerns didn’t just happen. It is the product of a long slogging effort by jews. A process by which anyone jews perceive as an enemy is pathologized and demonized, and thereby cowed or marginalized, if not utterly silenced. When a jew cries, “X has a jewish problem”, it’s a call for jews to pounce on X.

Chuck Hagel is the most recent example of how this “jewish lobby” process works. If he makes the right combination of sufficiently subservient gestures, acknowledging and accepting jewish domination without calling further negative attention to it, then he might get the job. If not, he won’t.

Now with the ground well prepared it’s safe to get back to the old Red-vs-Blue again, to act as if jews don’t have power, and move on. For example, here’s David Brooks in Why Hagel Was Picked, published on 7 Jan 2013 by NYTimes.com:

Chuck Hagel has been nominated to supervise the beginning of this generation-long process of defense cutbacks. If a Democratic president is going to slash defense, he probably wants a Republican at the Pentagon to give him political cover, and he probably wants a decorated war hero to boot.

All the charges about Hagel’s views on Israel or Iran are secondary. The real question is, how will he begin this long cutting process? How will he balance modernizing the military and paying current personnel? How will he recalibrate American defense strategy with, say, 455,000 fewer service members?

How, in short, will Hagel supervise the beginning of America’s military decline? If members of Congress don’t want America to decline militarily, well, they have no one to blame but the voters and themselves.

One reason jews won’t openly acknowledge their political power is because they realize it’s fundamentally dishonest and illegitimate – made possible by the vast majority of people not recognizing it for what it is. This is the threat Stephens was sniffing out in the loose talk from an uppity goy senator about the “jewish lobby”. What’s weighing on Brooks’ mind is related. If and when anything goes wrong jews can be counted on to blame anyone but jews. Brooks is looking to the future, anticipating this eventuality.