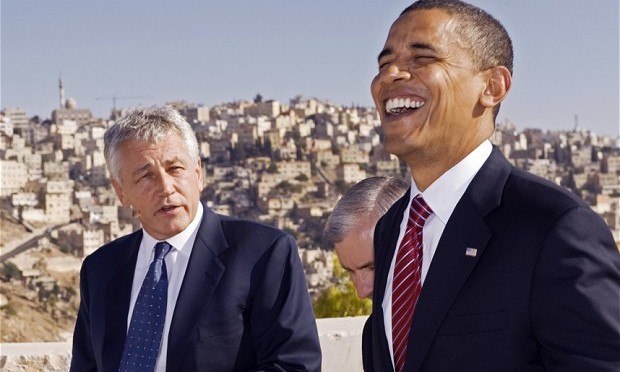 Chuck Hagel may be off of Obama’s shortlist to head DOD, by Adam Kredo, Washington Free Beacon, 19 Dec 2012:

Hagel immediately drew a frosty reception from observers who criticized him for advocating in favor of direct unconditional talks with Iran and for backing sizable cuts to the defense budget.

Those who have worked with Hagel and have an intimate knowledge of his managerial style also expressed concerns about his possible appointment.

Sources on Capitol Hill told the Free Beacon that opposition to Hagel reaches all the way to the Embassy of Israel, which is said to have quietly expressed concern about the former senator.

“Our office has talked with the Israel embassy who says their policy is to support whatever the president wants in his cabinet and would not provide further comment,” one Senate aide told the Free Beacon. “With a little prodding, our contact at the embassy did allude to their concern for Hagel’s nomination.”

Hagel has drawn additional heat from insiders who claim he lacks the credentials needed to manage a department as large and essential as the Pentagon.

“Yes, Hagel has crazy positions on several key issues. Yes, Hagel has said things that are borderline anti-Semitism. Yes, Hagel wants to gut the Pentagon’s budget. But above all, he’s not a nice person and he’s bad to his staff,” said a senior Republican Senate aide who has close ties to former Hagel staffers.

“Chuck Hagel may have been collegial to his Senate colleagues but he was the Cornhusker wears Prada to his staff, some of whom describe their former boss as perhaps the most paranoid and abusive in the Senate, one who would rifle through staffers desks and berate them for imagined disloyalty,” said Michael Rubin, a former Pentagon adviser on Iran and Iraq. “He might get away with that when it comes to staffers in their 20s, but that sort of personality is going to go over like a ton of bricks at the Pentagon.”

“Chances are he’ll view any legitimate effort to talk about military options with Iran as some plot by the ‘Israel Lobby’ to box him in,” the source said.

Reviewing the objections to Hagel, aside from the inconsequential nonsense, it’s plain that the that Israel-firsters, AKA the Israel Lobby, AKA jews, effectively vetoed his nomination. They did so in the characteristically dishonest way jews usually go about exercising their power – a gaggle of jews furiously, publicly debating in markedly jewish terms, with the final verdict being Hagel has magically disqualified himself, because jews don’t actually have any power.

In this absurd debate, represented in part by Doug Bandow’s Neocons Against Chuck Hagel: The Independent Senator Who Wouldn’t Genuflect, we hear what are considered examples of Hagel’s “anti-semitism”: “I’m a United States senator. I support Israel. But my first interest is I take an oath of office to the Constitution of the United States. Not to a president. Not a party. Not to Israel.” Even more scandalous, “The political reality is that … the Jewish lobby intimidates a lot of people up here.”

The political reality is that USGOV officials, even at the very top, cannot say they would put US interests above Israel’s, much less actually do so. Beside that, the mythical divide between “liberal” and “neocon” is once more revealed as a lie. In the wake of Obama’s re-election the “liberals” are supposedly in power. The “neocons” should be licking their wounds. The political reality is dominated by jews debating the best interests of jews. Whatever the outcome, jews win.

There are copious examples of this farce. Beyond the two articles already cited I’ll call attention to two more.

In Nebraska Jews Recall Senator Chuck Hagel as “Unfriendly” and “Unmovable” on Israel, “Didn’t Give a Damn About the Jewish Community”, published by Algemeiner.com, 21 Dec 2012, we read:

Former editor of the Omaha Jewish Press, Carol Katzman, who was in that role while Hagel was in office, related her experiences with him in an interview with The Algemeiner.

“He was not the most responsive politician in Nebraska to me personally at the Jewish Press and to the Jewish community as a whole,” she said.

“Every other senator, Nelson, Mike Johanns, (congressman) Lee Terry and (congressman) Peter Hoagland they were all very responsive,” she explained, “it didn’t really matter what their party affiliation was, if we were soliciting them for an interview or a greeting ad for Rosh Hashonah or Passover.” However Katzman says that “Hagel’s office never even responded,” adding, “we would make repeated calls, (and received) no response it was pretty obvious that he and his staff were dismissive.”

To be fair, articles like this weren’t part of the debate, which is already over. It does however contain an essential element of the debate, whereby jews lamely try to rationalize their distaste for Hagel and stick him with the blame for it.

In Gil Troy’s Hagel: Not An Anti-Semite, Just A Slob, published in the Open Zion section of The Daily Beast on 19 Dec 2012, there is more of the same:

Without rehashing the entire debate, as senator, Hagel was more of an Israel skeptic than an enthusiastic Israel friend, no Ted Kennedy, or John McCain, or Joe Biden, or Hillary Clinton was he. And for that reason, snarky comments about the “Jewish lobby” and about being a “United States Senator” and “not an Israeli Senator” rankle. Prejudice has a pedigree. Just as we winced when Biden as a candidate called Obama “articulate”—because of the twisted history that had many people questioning black people’s brains and eloquence, respectful American leaders should not stir the hornet’s nest around the Israel lobby question.

Here is another characteristic strand of jewish argument, with Troy arrogantly lecturing “leaders” to respect jewish power by pretending it does not exist. He then recounts a lesson about that power from 20 years ago:

I learned from Malcolm Hoenlein that Shoshana Cardin, the President of the Conference of Presidents of Major American Jewish Organizations, confronted President George H.W. Bush after his dramatic September 1991 press conference, claiming he was “one lonely little guy” facing “powerful political forces,” after 1,200 Israel activists lobbied Congress seeking loan guarantees to help Israel resettle emigrating Soviet Jews. In a private meeting, Cardin explained that talk of Jewish lobbyists out-muscling the president echoed traditionally bigoted exaggerations about Jewish power. Bush pointed out that he “didn’t use the word ‘Jews.’ ” Cardin explained he did not have to. “Everyone understood that the people you were referring to were Jewish. That’s why the White House switchboard lit up with so many messages of support from anti-Semites.”

“I never intended to hurt anyone,” Bush said, teary-eyed, “Or give encouragement to anti-Semitism.” He then apologized to the American Jewish leaders gathered to meet him.

Even US presidents fear jewish power. One way to reconcile the jewish view of this as a “bigoted exaggeration” is to understand that, at least in the minds of hyper-jew-centric jews, US presidents can and should be doing even more for jews. For another example of this, read this bitter jew-centric assessment of Richard Nixon, another president whose failure to openly identify his and his country’s enemies hasn’t made those enemies hate him any less.

The take-away, once again, is that jewish rhetoric about “anti-semitism” is a simple and effective inversion and projection of their own obsessions and aggression. White political leaders should naturally seek to serve the interests and favor of fellow Whites. But none actually do. Instead what we have is a political reality in which jews relentlessly pathologize and demonize Whites for illusory “White privilege” and ineffective political “dog whistling”. Meanwhile jews make ever more blatant and outrageous demands of a regime which already serves their interests first and foremost. Both are sure signs that jewish power not only exists, but is increasing. It will continue to increase until it is faced with real opposition.