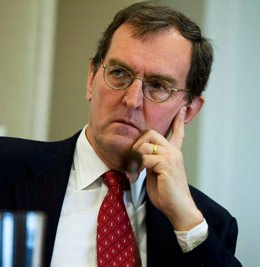 Why on earth are we planning to import more such problems for ourselves?

It neatly captures Derbyshire’s muddled “conservative” view. He asserts “we” are doing this to “ourselves”, but can’t explain why. Earlier in the podcast he notes:

There is an expression in statecraft that I think we got from Cardinal Richelieu. At any rate, it’s always stated in French: raison d’État, “reason of state.”

The idea is that those charged with running a country have the overriding duty to see that the country goes on existing, even if this means doing things contrary to the country’s stated principles or religion. You get a similar flavor from the American maxim that “the Constitution is not a suicide pact.” Statesmen should never, never be in the business of aiding and abetting national suicide.

How does raison d’État figure into suicide? It doesn’t. The word for statesmen aiding and abetting the destruction of a nation is genocide. If democracy is the idea that George Soros has the same political power as Joe Sixpack, then the suicide meme is the idea that George Soros and Joe Sixpack are both trying to kill themselves. Both ideas are ridiculous, but you’d never know it from the sober, serious respect they get from intellectuals.

Derbyshire knows well enough that any White who opposes any aspect of the open borders regime, for whatever reason whatsoever, is pathologized as “racist”. Those who demonstrate any actual awareness of race are demonized as “nazi”. In either case such opposition is censured and marginalized. Dehumanized. Demoralized. Misled. Overpowered. It flows from the top down.

By chance I just recently re-read Derbyshire’s Be Nice, or We’ll Crush You, published by jewcy.com in 2007. It is part of a longer series in which Derbyshire tries to demonstrate, to a jewish audience, how well he understands the jews. His purpose, apparently, being to convince them that his attitudes about race do not make him any threat to jews. A large part of his posturing consisted of him sneering at and trying to distinguish himself from Kevin MacDonald:

Generally speaking—and I certainly include myself here—American conservatism is proud of its Jews, and glad to have them on board. Not that there aren’t some frictions, particularly on mass immigration, the mere contemplation of which just seems to make Jews swoon with ecstasy (American Jews, at any rate. Israeli Jews have a different opinion…). MacDonald gives over a whole chapter of The Culture of Critique to the Jewish-American passion for mass immigration.

Jewish Involvement in Shaping American Immigration Policy, 1881-1965: A Historical Review conveys the gist of the chapter Derbyshire refers to.

So why on earth would someone who knows what Derbyshire knows forget it and pretend “we” are doing this to “ourselves”? Based on Derbyshire’s own rationale, as he lays out in that jewcy.com article, it seems his primary concern is to maintain his status (such as it is) within a regime which he implicitly recognizes is dominated by jews and jewish interests.

Derbyshire’s coy use of “we” is self-implicating. He is part of the problem he complains so disingenuously about. He conflates the genocidal “we” who have power (with whom he identifies from the margins) with the broader “we” who have no power (and less knowledge than he does), both downplaying the crime and distributing responsibility for it.

It is no accident that the suicide meme finds purchase mainly in the “conservative” race-aware/jew-friendly millieu with whom Derbyshire remains somewhat popular. It cannot take hold in the anti-White mainstream where it is regarded as unthinkably “racist” to worry about what’s good or bad for Whites. Likewise, it flops in forums and minds where jews are recognized as adversaries rather than allies.

Earlier this week Moonbattery, a long-running blog that falls somewhere within the race-aware/jew-friendly sphere, posted Conan Audience Applauds Its Own Extinction, invoking Derbyshire but contemplating a less suicidal view:

It isn’t your imagination. Liberals really do want to eradicate the white race. John Derbyshire (who was canned from National Review by establishmentarian thought cop Rich Lowry for failing to toe the liberal line on racial issues) found confirmation by watching the knee-jerk libs comprising the audience of Conan O’Brien’s show.

Consider for just a moment the implications of a people so deranged in its dominate ideology that it would cheer its own eradication. But then, how else would you explain the policies imposed by the liberal ruling class except as a methodical program to completely wipe us out by destroying our traditions, our mode of government (limited, constitutional), our culture, our pride, our freedom, our morals, our faith, and even our biological kind?

What progressives are progressing toward is this: a world in which America and Americans no longer exist. They are the enemy at a far more profound level than even the Nazis or the imperial Japanese.

Contra Derbyshire, there is no delusion here that “we” are doing this to “ourselves”. There is explicit recognition that “the white race” is targeted. Still, there are several flaws.

The ruling class is as much or more pro-jew as it is anti-White. That ruling class applauds the eradication of Whites, not jews. They don’t pathologize or demonize jewish traditions, culture, pride, freedom, morals or faith, much less their biological kind.

The ruling class is “liberal” only in the sense that it is disproportionately jewish and their discourse, across the board, is pain-stakingly sensitive to “minority” (a proxy for jewish) sensibilities. To participate in the ruling class you must support the existence of jews as a people, separate and more equal than any other, everywhere in the world. You may not support the existence of Whites for any purpose other than as metaphorical whipping boys.

“Nazis” are the metric of immorality for this regime exactly because the rulers are jews.

“Something bad is happening, but it’s not the jews, it can’t be the jews, my friends (especially the jews) will crucify me if I catch The Jew Thing. Therefore, it can only be us, we must be doing this to ourselves.”

This line of thinking has a solipsistic and masochistic appeal. But it’s just another White guilt-trip. Reassuring because it is both simple and self-fulfilling.

44 thoughts on “John Derbyshire and The Suicide Thing”